I apologize for the lack of update yesterday. I had planned on posting this last night, but, for whatever reason, Marvel was a day late releasing their solicitations for comics they plan to ship in January. Well, they're up now. You can see the whole shebang here, and you can read some of my thoughts on some of 'em below. 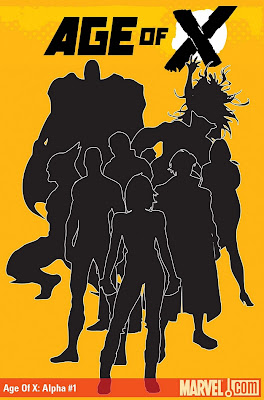 AGE OF X: ALPHA #1
Written by MIKE CAREY
Pencils by TBD
Cover by CHRIS BACHALO
Variant Cover by OLIVIER COIPEL
Mutantkind’s final war starts here.
If you don’t know which side you’re on, check your DNA.
32 PGS./Rated A ...$3.99

The final war? Really? I find that hard to believe, Marvel Solicitation.


ANITA BLAKE: CIRCUS OF THE DAMNED—THE INGENUE #1 (of 5)
Written by Laurell K. Hamilton & Jess Booth
Pencils by Ron Lim
Cover by Brett Booth
BEST-SELLING AUTHOR LAURELL K. HAMILTON’S HEROINE IS BACK! Morgues, by a rule, are pretty quiet places. But in a world of vamps and the rising dead, they can be positively hopping. Join animator Anita Blake as her search for a serial killer takes her to the most dangerous after-hours joint in St. Louis!
32 PGS./Mature ...$3.99

Anita Black is an animator? She works in the animation industry? Huh. I thought she was a vampire hunter or private investigator of some kind. 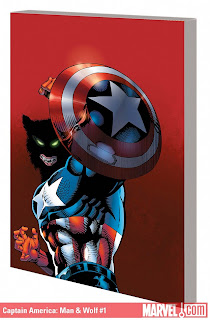 CAPTAIN AMERICA: MAN & WOLF TPB
Written by MARK GRUENWALD
Penciled by RIK LEVINS
Cover by RIK LEVINS
What has brown fur, fangs and a star-spangled shield? Why, it’s Capwolf! When old Cap foes Dredmund Druid and Deadly Nightshade begin mass-producing werewolves, Captain America investigates—only to become one himself! How will the world’s greatest Avenger get out of this one? Featuring a rare battle between Cap and Wolverine, and guest-starring Cable, Wolfsbane and Doctor Druid! Collecting CAPTAIN AMERICA #402-408.
136 PGS./Rated A ...$14.99

I'm really quite curious about this storyline, although it seems like one better encountered in a back-issue bin or a black an Essential volume. Have any of you guys read this story? Is it as awesome as a story about Captain America turning into a werewolf sounds? 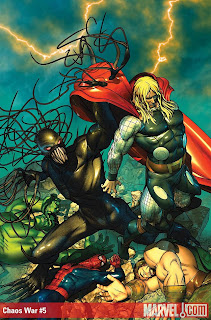 CHAOS WAR #5 (of 5)
Written by GREG PAK & FRED VAN LENTE
Penciled by KHOI PHAM
Cover by BRANDON PETERSON
THIS IS IT!! THE MARVEL UNIVERSE'S LAST STAND! The Chaos King unleashes his ultimate attack against reality as we know it -- and our survival depends on a boy, his god, and their ragtag band of allies: The Mighty Thor! The Incredible Hulks! The Dead (and Living?) Avengers! The X-Men! Alpha Flight! But are they enough to stand against THE ANTI-ETERNITY ... The force that seeks to negate all existence itself? In this issue, the universe dies and everyone wins! ...What?
32 PGS./Rated T+ ...$3.99

Huh. I know comic book super hero stories often unintentionally echo one another, as much by coincidence as anything else, but, from afar, this Pak and Van Lente punch 'em up seems almost uncanny in it's echoing of DC's recent Blackest Night thingee.

Not only is there the whole dead heroes coming back to life thing going on... 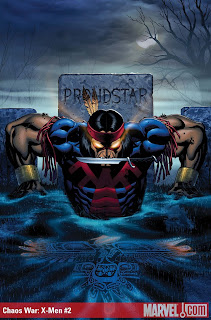 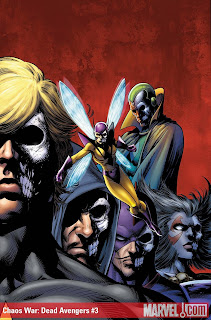 ...but the phrasing of the conflict here really sounds an awful lot like the conflict between Nekron/pre-life and life in Blackest Night, doesn't it?

I'd really like to catch up on this title in trade eventually, but I'm afraid it's big enough that, like a handful of Marvel's other recent-ish mini-events (Shadowland, that X-Men vs. vampires thing), I find the prospect of figuring out what to read and in what order sort of daunting. 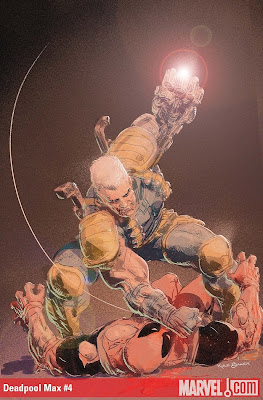 Wow, not only is Kyle Baker drawing Deadpool, but he's drawing Cable too? Huh. 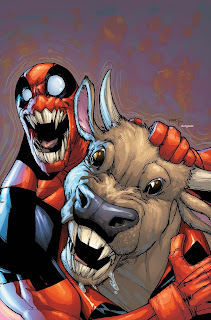 DEADPOOL TEAM-UP #885
Written by Rick Spears
Art by Philip Bond
Cover by Humberto Ramos
Watch out Marvel U, the Bovine Blood Beast is back!" The Merc with a Mouth meets the "The Cow with a Cape. Gaze in horror, dear reader, upon the fiendish experiments inflicted upon Deadpool and Bessie the Vampire Cow by the malevolent Dr. Kilgore in the name of mad science and bear witness to their terrible revenge! Nothing on earth can prepare you for the horror that lurks within these pages.
32 PGS./Parental Advisory ...$2.99

This bizarrely-numbered series has been the most interesting of the many, many Deadpool comics being published these days. The characters chosen for the dozen or so issues so far seem like they were plucked from a pool of comics bloggers' favorites—Hercules, Ghost Rider, U.S. Ace, Captain Britain, Punisher-as-Frankenstein, Machine Man, Gorilla-Man—and the creative pool has been a deep and wide one.

So as sick as I am of Deadpool, as disappointed as I've been in the handful of issues of this I've read, I'm kinda curious about this one. 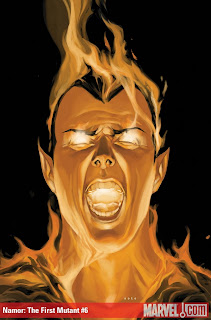 NAMOR: THE FIRST MUTANT #6
Written by STUART MOORE
Penciled by ARIEL OLIVETTI
Cover by PHIL NOTO
NAMOR GOES TO HELL -- PART ONE OF THREE!
If Wolverine jumped off a bridge, would you jump too? That's the question Namor must answer when the old Kings of Atlantis escape Hell only to drag him back down with them – into a burning desert wasteland. Can even the X-Men help him now? And with its king missing, what will happen to New Atlantis?
32 PGS./Rated T+ ...$2.99

I'm not fond of Olivetti's more recent art, but this sounds kinda cool...even the shopworn superhero-goes-to-hell might be fun given my affection for the lead character (Nice job bringing it up and dismissing it in the solicitation copy too, Mr. Solicitation Copy Writer). 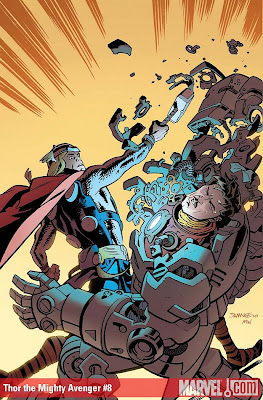 How about that Chris Samnee, huh? Wow. 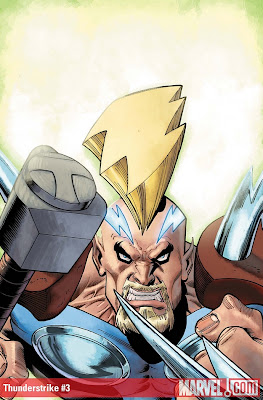 That's...that's hair on top of that dude's head, right? 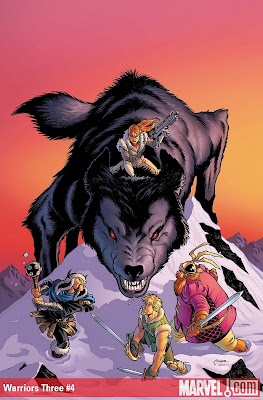 
ULTIMATE COMICS CAPTAIN AMERICA #1 (of 4)
Written by JASON AARON
Pencils & Cover by RON GARNEY
Villian Variant Cover by ED McGUINNESS
Captain America meets his ultimate nemesis—the Captain America of the Vietnam War! As new enemies face off, old secrets from the super soldier project are revealed. From the superstar Wolverine: Weapon X creative team of Jason Aaron and Ron Garney, get ready for a hard hitting story of one man’s quest to serve his country...and the sacrifices he must make.
32 PGS./Rated T+ ...$3.99

I'm so out of the Ultimate/Ultimate Comics loop now that I wonder if I can even pick up a random Ultimate trade and understand and/or enjoy it, or if will all be like a foreign language to me now? I do like that Aaron/Garney team though... 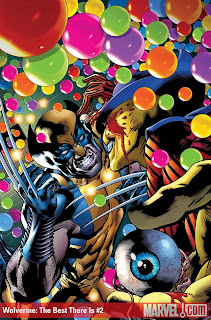 WOLVERINE: THE BEST THERE IS #2
Written by CHARLIE HUSTON
Penciled by JUAN JOSE RYP
Cover by BRYAN HITCH
Variant cover by MARKO DJURDJEVIC
“Contagion, Part One: This Little Curiosity,” PART 2 OF 6
It’s cover-to-cover blood-soaked action as the most extreme Wolverine monthly ever continues! Wolverine has never faced an opponent quite like Contagion, who becomes a much bigger problem if he's killed! But first, Logan must get past the aptly named Unkillables. Round one: Madcap. Whatever you do, don’t look into his eyes.
32 PGS./Parental Advisory ...$3.99

One of the very first Marvel comics I ever bought was an issue of Ghost Rider featuring this Madcap person drawn by Bret Blevins. I don't remember digging the comic very much, but I was in the shop looking for something to read, and I'd like the characters name and costume design.

I wonder if this series will be worth reading in trade next year? Juan Jose Ryp drawing a Wolverine series oughta be something to see, right? Especially if they're promising "the most extreme Wolverine monthly ever," right?


X-FACTOR #214
Written by Peter David
Penciled by Emanuela Lupacchino
Cover by David Yardin
The suicide of a high school student triggers X-Factor's most personal case as X-Factor is hired to learn the identities of the bullies who drove the student to take his own life. But once they have the names, do they turn that information over to the authorities...or to the student's angry family, who may well take punishment into their own hands?
32 PGS./Rated T+ ...$2.99

Well, that sure sounds timely, doesn't it? Almost creepily so, really.
Posted by Caleb at 5:55 PM

"Well, that sure sounds timely, doesn't it? Almost creepily so, really."

Uh, it's intentional. PAD has explicitly said he wants to cover relevant social issues in the book.

Was that sarcasm or did you not know the character is an Animator, which is someone who raises zombies...

Sadly, the Captain America Essentials end about 15 years before that Werewolf storyline, which is from 1992. The last issue in volume 5 is #205 from 1977.

LurkerWithout - I'm not Caleb, of course. But I don't know anything about Anita Blake, and if I read the word "animator", I'm going to associate it with animated cartoons.

"Was that sarcasm or did you not know the character is an Animator, which is someone who raises zombies..."

Isn't that a necromancer?

I've read a lot of fantasy, played a lot of D&D and never heard of an Animator before.

In the Anita Blake-verse a Necromancer is a really, really powerful Animator (like Anita is eventually). One who can exert control over other kinds of undead and not just raise zombies...

Man, I gave up on the series years ago and my brain is still full of stuff from it. And yet I couldn't tell you what my license plate is without looking...

Only comic I remember where Wolverine fought Madcap was an issue of Power Pack where Logan teamed up with Katie Power and Franklin Richards.

"Capwolf" is anti-awesome. It takes itself seriously enough not to be any fun, yet is still aggressively dumb and excessive (throat slitting, Wolverine & Cable guest spots, Rik Levins art, etc.)

Whoa, that issue of Ghost Rider is the first comic I ever bought. I just picked up a new copy a couple days ago since I haven't read it since second grade.

Was that sarcasm or did you not know the character is an Animator, which is someone who raises zombies...

Both, but mostly the former. All I know about the character is what I've read in Chris Sims' annotations of the comics and what I've seen of the books while shelving them and/or finding them for patrons at my previous job in a library.

I knew she didn't actually work in the animation industry, although that's the first thing I thought when I saw that word...I always associated the word "re-animator" with the animation of the dead...

Thanks for dropping the Anita Blake science though, and the thoughts on CapWolf, all...

The Herc story LOOKS to be shaping up as...(spoilers for the first two issues below)

Hell gets overrun. Dead Heroes return. Every mortal on Earth ends up in a coma. God Squad + Dead Heroes have to save the day.

So it's got some overlap with Blackest Night/Brightest Day, yes, but it's Hercules instead of Green Lantern so it should be fun with a whole lot less gore.

That Cap-Wolf story actually got me to drop Captain America.

How can Marvel print the atrocious "CapWolf" story, but NOT the "John Walker as Captain America/Steve Rogers as The Captain" saga?