I think this is a pretty good illustration of why those in the business of making and selling serially-published comic books shouldn’t go out of their way to encourage trade-waiting, so please indulge me while I write a long, drawn-out anecdote.

Earlier this year Marvel published a four-issue miniseries called X-Men: Pixie Strikes Back, featuring the new-ish, pixie-powered X-person who seems to function a bit like Kitty Pryde 2.0 in the current X-Men line-up. I don’t normally read X-Men comic books—too many moving parts, even for me—but the series was written by Kathryn Immonen, whose previous Marvel work I rather enjoyed, and it was drawn by Sara Pichelli, whose previous Marvel work I loved. It featured swell covers by Kathryn’s husband, and seemed to have a high school plot that is right up own my personal escapist alley.

Liking—or being curious about, or interested in—a creative team isn’t generally a good enough reason to start buying X-Men comics if your apartment is ankle-deep in superhero comics already, but it looked like the sort of thing that would be worth flipping through in the comic shop. Maybe it would be an impulse buy the week it came out, or something to pick up later in the month if there was a slow Wednesday.

Marvel, as is their way, priced the book about a minor X-person by up-and-coming creators at $3.99.

So I filed the title away in my own personal List of Trades I Will Probably Buy Someday. It’s a big list, full of series like this I’m perhaps only curious about, as well as thousands of dollars worth of manga (Seriously, do you know how many hundreds of dollars it would take to catch up on just, say, Rumiko Takahashi’s 50+ volume Inuyasha and Ken Akamatsu’s 28-volume Negima!) and thousands of more dollars worth of deluxe reprint collections of classic comic strips.

There are a lot of modern Marvel series I decide to trade-wait, but that generally simply translates into “not buying…but maybe someday.” Hell, I might go to Japan some day.

Well, the last time I was perusing the graphic novel section at a library that has a pretty sizable one, I noticed the trade paperback collection of X-Men: Pixie Strikes Back there. So now I had the option to read it immediately for free, the option I took.

Having been scared by Marvel’s scary price tag, I went from wanting to buy it to maybe thinking I’d perhaps buy it to someday, and then, having seen it at the library, I went to definitely never buying it ever.

I think Marvel charges too much for their comics, and it ends up costing them sales of serial comics from the customers most primed to buy their serial comics, basically. And that ends my anecdote.

So is anyone still reading, and curious of what I thought of the book? (Which, by the way, bears a price tag of $14.99…the permanent, ad-free way to read this story is actually 97-cents cheaper than the comics themselves would have been! And let’s just check the old Amazon for a moment and see…it’s currently $10.19 there, $5.77 cheaper than the comics would have been. Sometimes it really amazes me that anyone even buys Marvel comics serially anymore.)

It is extremely Kathryn Immonen-y: A lot of fun ideas, strong characterization, snappy dialogue and, unfortunately, the assumption that you already know who the hell all these Marvel characters are and enough of their histories that you’ll be able to keep up with new chapters in their conflicts and emotionally invested in the results.

So as with Immonen’s Heralds, I felt a little like I was watching a pretty good foreign film with rotten sub-titles in broken English (Maybe the film is a badly-dubbed anime film with the English written by a native Chinese speaker). It looked good, and I could appreciate a lot of it, but I was often aware of the fact that I wasn’t getting something. 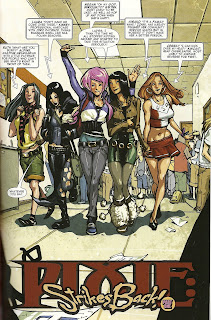 The book opens with a splash page of five school girls doing a walk-and-talk down a school hallway, each introduced via boxes and arrows containing their full names, favorite quotes, and a few terse sentences of characterization.

Over the next few pages, it becomes clear something’s not quite right around the edges of the school, and then we find out why—these five girls are Pixie and four other X-teens, including Armor from Joss Whedon’s Astonishing X-Men run, the teen girl version of Wolverine, and two others I’d never heard of.

The action is split from that inside the dream world Pixie and pals are trapped in, and the “real” world, where there first their fellow X-teens (I believe these are the characters from the post-Morrison version of New X-Men), and then Nightcrawler and Psylocke and finally Emma Frost all go looking for the missing girls.

Apparently, a big, bad bad, bad guy name Saturnine, whom seems to be a recurring X-villain but is also a demon, has captured them, and is using Pixie’s pixie-dust power to keep the girls in a dream state in order to draw out Pixie’s mom, who is actually the queen of fairy.

It succeeds, but first Pixie’s mom runs into the X-folks, so when she shows up to battle the army of demons for her daughters, the X-Men all do too.

As you can probably tell, I was pretty shaky on a lot of the background, but after an issue or two and I lost that “Damn, I need a program to read this thing” feeling, I rather enjoyed it.

The mix of fantasy stuff with mutant stuff seemed a little off the X-Men’s beaten path, similar to when they do stories about space pirates or Hell or whatever, but it was also kind of refreshing. And while a lot of the kids were more or less indistinguishable, Immonen gave the adult heroes pretty strong voices.

Here characters were charismatic, making them fun to spend time with, and thus read about.

Pichelli’s artwork seemed slightly weaker here than I’ve seen in the past, and I think it was something to do with Christina Strain’s colors over it. There’s a lot of varying textures to the different subjects, and some of those textures look a little forced.

For example, it’s clear that the guy made out of rock or the demon covered in scales have different textures than the smooth-skinned teens in spandex; the mottled, grainy wash of color given them is unnecessary. It’s like trying to communicate while shouting really loud, when talking does just fine.

While I wouldn’t go so far as to say that Pichelli’s characters are abstracted, they are certainly simplified, and she leaves quite a bit for the reader’s mind to fill in, but, if the details aren’t always there in the linework, Strain seems to add it with shadows and shines.

It’s not bad work, of course, but it makes for a less appealing-looking work than it might have been with more reserved coloring, particularly during several scenes set in a dark club, at a school dance and in a mysterious, dark place where the kidnap-ees are being held.

So that’s X-Men: Pixie Strikes Back, a pretty good, fairly entertaining super-comic that Marvel Comics seems to be trying to prevent people from reading, for some reason. 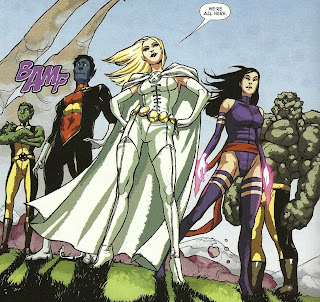