I've had trouble working up anything more than mild curiosity about the long-running Superman-before-he-was-Superman television series Smallville, but I sure have been reading a lot about it on the Internet lately, thanks to features like this Smallvillains thing at Comics Alliance and this Sayanora, Smallville thing at The Cool Kids Table.

Recently, Mike Sterling weighed in on the final season of Smallville, which is apparently going to adapt and integrate bits of Jack Kirby's 1970s cycle of Fourth World stories into its narrative, advocating that the producers go all out and "Kirby it up."

I was intrigued by this bit of Sterling's post, dealing with Smallville's Clark's lack of eyewear:

You know how some folks were wondering…well, how I was wondering, anyway, about how they were going to resolve the secret identity situation, given the fact that Clark’s been toolin’ around for ten seasons with no glasses, and that when he finally puts on the Superman costume, everyone he knows is going to look at him and say “hey, Clark, what’s with the get-up?”

The solution seems simple to me (and forgive me if others have pointed this out before; I generally steer clear of Smallville conversation on account of not knowing anything about it).

Maybe in the Smallville-verse, our hero will be sans glasses while in his semi-secret identity of mild-mannered but awfully hawt newspaper reporter Clark Kent, but add a pair of glasses when he changes into his Superman costume and identity? (Provided, of course, he ever does turn into Superman in this show). 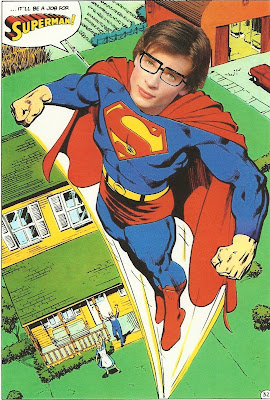 Are such eye-glasses just not super enough? Well, Clark could always borrow the glasses The Eradicator wore when he was posing as Superman during "The Reign of the Supermen": 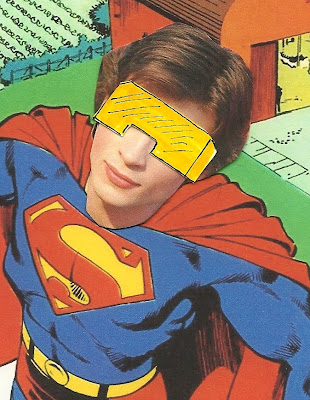