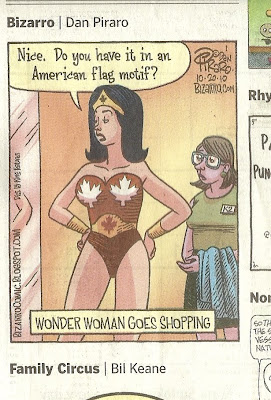 I don't know, I think she looks pretty good in red and white, and the maple leaf tiara's nice. To see more of Dan Piraro's work, check out his website (I particularly enjoyed the sketchbook section and the gallery of animal rights-related cartoons).

This installment of Funky Winkerbean appeared the same day in the same paper's funny pages:

I was quite surprised to see the word "whore" there. Sure, Old Les was using it to refer to himself, and in a joking, self-deprecating was, as part of a metaphor construction, but still—whore. Remember during the endless 2008 Democratic primary campaign, when the Clintons and Hilary Clinton's campaign feigned a freak-out over some goofy pundit-type used a construction of the phrase "pimp out" to refer to Chelsea Clinton working for the campaign?

"Whore" is an even stronger word than "pimp," isn't it? And newspaper comic strip readers even more prone to blushing, fainting and hand-wringing than political-types, right?

Once I got past the use of the word whore though, the whole thing just sort of confused me. If you're not following the ins-and-outs of Les Moore's life as seen in Funky, he is apparently promoting a book he wrote about his late wife's death. For some reason, this PR or agent lady says he needs to do interviews in order to secure blurbs for his book, but blurb's don't come from interviews, they come from reviews. Reviews, or the publisher simply asking someone famous to provide them with a blurb to put on the back cover.

Maybe it works differently in the Funki-verse, but an author interview is actually a really hard place to get a blurb out of, since interviews are more often than not neutral on the quality of the work.

Anyway, look—there's the word "whore" in the funnies!
Posted by Caleb at 4:03 PM