A Eulogy for Bill "Goliath" Foster 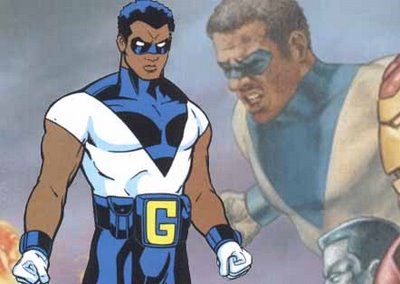 (Text of speech delivered by the 616 version of J. Caleb Mozzocco on Thursday, September 21, 2006, at a New Jersey cemetery)

Friends, we are gathered here today to say good bye to Barrett Foster, known to those of us who knew him best as Bill, and, to the world as, Goliath, the really big superhero who wasn’t Yellowjacket, Giant Man, Atlas or that other Goliath…who’s really Hawkeye…and also dead now. I think.

I didn’t know Foster as well as some of you. In fact, I didn’t know him at all. I even had to wiki him and re-read my copy of Civil War Files while preparing these remarks this morning. But Tony Stark asked me to say something here because, well, he felt someone should, and everyone else who knew Foster better than me either feels partly responsible for his death, or is a wanted criminal who’s afraid they’ll get killed themselves if they show up here today. So I guess it’s down to me.

Foster may have become most famous as a superhero, but he was also a scientist, and, by all accounts, a rather brilliant one. When Dr. Henry “Hank” Pym, a.k.a. Ant-Man, a.ka. Giant-Man, a.k.a. Yellowjacket became stuck at his giant size, it was Foster who helped with his research, becoming close enough to Pym and experienced enough with the usage of Pym Particles that Foster developed his own superhuman identity, taking the name of “Black Goliath.”

Why he chose that particular name, I’ll never know and, sadly, will now never be able to ask him. This was back in the day when there were fewer black heroes than there are today, of course, but even then few seemed to need to identify themselves by announcing their race in their codename. After all, it’s not like Luke Cage was calling himself Black Power Man, or his highness King T’Challa was going by Black Black Panther, and certainly the white heroes never felt the need to call themselves White Thor or White Giant-Man.

And what was with “Goliath?” I mean, he was a bad guy in the Bible, wasn’t he? A bad guy who got taken out by a slingshot.

Now it hardly matters, of course. As time went on, Foster would take on other names, including “Giant-Man” and just plain old “Goliath,” which is what he was going by when the Superhuman Registration Act was passed. It was in resisting to register with SHIELD and become a federal employee that Goliath became branded a criminal, and banded together with fellow outlaws Captain America and the Falcon to form a team that the papers have been calling “The Secret Avengers.”

They were responding to a distress call when they came across the government’s registered super-heroes, lead by Tony “Iron Man” Stark. Foster and the others were told there was a petrochemical plant on fire, with three or four hundred innocents trapped inside. So Foster did what heroes do: He rushed there to see what he could do to help.

There was a chemical plant on fire, but it was empty—Stark put the call out to lure the Cap, Foster and their allies into one place so they could talk it out. Stark showed up with a veritable army of super-people behind him, not to mention hundred of SHIELD soldiers and a soulless clone of his fallen friend Thor. He brought them all along not because he was looking for a fight, but rather to show the rebels how strong support for the Registration Act actually was among their peers.

It was raining, just like it is this morning, when things turned ugly, and the Thor clone started shooting lightning and swinging his mechanical Mjolnir—did I pronounce that right? Reed? Is it “muh-jol-nur” or “yolnir,” or “mo-yol-nur?” His mechanical hammer.

Foster, showing the bravery we’ve come to expect from a man who saved the lives of every one of us standing here—and billions of others—when he risked his own against the Nth Man—Reed? Is it “Enth” Man? Did I say that one right?—stood up to Thorzarro, attacking him head on, and paying the price for resisting arrest at the hands of a soulless clone created in a government laboratory.

Goliath’s death seems all the more tragic because things were really starting to look up for him. He’d had more cover appearances in these last few months than he has since his own short-lived title, and he has been appearing regularly shoulder to shoulder with the greatest hero in our universe, Captain Ameri—well, second greatest hero, behind Iron Man, of course. And Mr. Fantastic. And Yellowjacket. And, of course, the lovely Wasp.

There’s also been some talk, gossip really, about an all-black superteam recently. And Goliath’s death means we may not ever get to see a Black Avengers team, featuring Josiah X, Black Panther, Storm, War Machine, Goliath, Falcon, Cage and Blade.

If nothing else, Goliath’s death should serve as a reminder to us all of what happens when you refuse to follow the letter of the law, even laws passed within a week’s time of a horrible, traumatic tragedy, by lawmakers who certainly didn’t have time to read the whole thing, let alone debate it. And this is what will happen: You will be arrested and sent to a prison in an alternate dimension, or you will be killed by lightning while resisting arrest.

Goliath has taught us a very important: No man, no matter how big he can grow, is bigger than the law.

I know it’s going to be hard living without Goliath. He was always there for us, whether we needed him to get our kitten out of a tree, fiddle with the TV attenae, put the star on top of the Christmas tree, reach something on the top shelf of the grocery store, or saving us from Stilt-Man or Atom-Smasher.

I’m sure we’ll see Bill again someday. Maybe it will just be as a ghost or zombie, or resurrected to join the Legion of the Unliving. Or maybe we’ll see him while journeying through the past, or heaven or some weird astral dimension. Maybe Kang The Conqueror or Immortus will bring him back, pulling him out of the time stream before the lightning hit him. Maybe an alternate Bill Foster from a different dimension will come here to our universe, and make a home for himself here.

At the very least, I’m sure Tony and Reed will be able to grow another Bill Foster, just as they grew another Thor. It’s not like we don’t have enough genetic material, I mean, just look at the size of that thing!

Yes, Tony and Reed can grow us another Bill Foster, one that’s just as good as the original—no, better than the original! One that will obey the Superhuman Registration Act, one that won’t resist arrest and one that would never swing a truck at a federal agent. So dry your eyes, friends and family of Bill Foster, now that we’ve perfected the fine art of cloning superheroes for government usage, the sky’s the limit.

I can’t speak for Tony and Reed, of course, but I’m sure they’d be happy to make you another Bill. After all, it’s the least they could do, given the fact that it was their clone that—I’m sorry Tony, what did you say? “Audio-blocks?” What do you mean by—wait, does anyone else hear that? Like a buz--Aaaaa! Aaaa! Make it stop! I surrender! I surrender! Oh God, the pain!

Dude, you forgot Triad, Misty Knight, Bishop, Shard, Synch (or is he dead), Patriot(?) and the coolest of them all, Brother Voodoo.

Which is sadder, that I all knew that without looking it up or that Marvel has so few black characters that they'd be smaller team than the squad in X-Men #1?

Ha! I won't plug your quoestion into the Sadness-o-meter, but you've got a good point.

I didn't forget all of those characters--well, I did forget some of them--as much as I was just cherrypicking my favorite Black Marvel heroes that seemed Avengers-worthy. Brother Voodoo, for example, was in Hudlin's "Black Avengers' arc for Black Panther, but I just couldn't get around his name and costume to get into him. But then, the only Brother Voodoo appearances I've seen have been in Hudlin's Black Panther.

If you've got any Brother Voodoo stories to recommend, I'm all ears.

Is there a good Brother Voodoo story that isn't 30 years old? He last appeared semi-regularly in the "Supernaturals" mini-series which I didn't see . I'm glad Bendis has such a shameless man-crush on Cage because comic books tend to forget that non-white people exist. Hell, the MCU is set mostly in the most diverse city in the world, but if not for the tall buildings you'd think all the action takes place in Salt Lake City.