(Not actually an installment of) Actually Essential Storylines: Blue Beetle 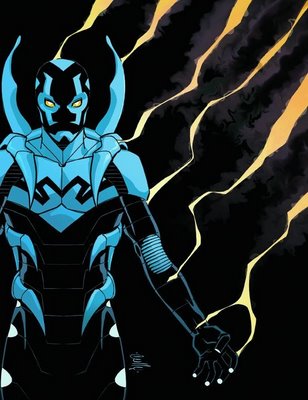 The origin told in the back of this week’s issue of 52 is perhaps the least essential one so far, not only for readers of this particular series, but for readers of any DC title, given how long the character starring in it has been around and how few his appearances have been. It’s Blue Beetle III, young Jaime Reyes, who was just introduced in the midst of Infinite Crisis, and whose solo title Blue Beetle is only up to issue # 10.

The art comes courtesy of BB3’s designer and original artist, Cully Hamner. It’s nice enough to look at—Hamner’s design was what originally attracted me to check out an otherwise rather unremarkable superhero pastiche comic—but the two-page story is fairly pointless, considering how little there is to add to Reyes’ story at this point (In fact, his origin is still being told and has not yet been fully revealed in his title yet).

Just take a look at what DC suggests as “Essential Storylines.” There’s Infinite Crisis, which was pretty much required reading for anyone who reads DC Comics already anyway, followed by Blue Beetle: Shellshocked, the trade collection of the first six issues of the series by Hamner and writers Keith Giffen and John Rogers, and Blue Beetle #7, which re-tells Jaime’s role in IC from his perspective.

Or, in other words, there have been about three Blue Beetle storylines so far, all of which are essential.

Aside from the pointlessness of the endeavor, the only other remarkable aspect of this week’s origin is the fact that Waid doesn’t even mention the first two Blue Beetles, Dan Garrett or Ted Kord. If these few panels are indeed your first introduction to the character (and I doubt that anyone is reading about BB3 here for the very first time, given his involvement in IC), you wouldn’t even realize that he is a legacy character, taking on the name of one of the Justice League’s longest serving members.
Posted by Caleb at 6:51 PM