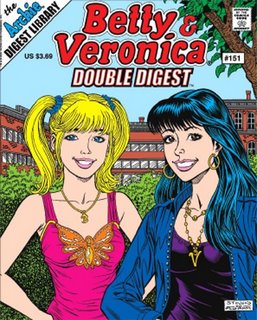 This past weekend, Newsarama.com reported that the 60-plus-year-old teenagers of Riverdale are getting a makeover, and gave the world its first look at the new look, complete with the image of Betty and Veronica to the right and a pencilled page featuring Archie himself, courtesy of artist Steven Butler.

The results are...interesting, to say the least. I don't read many—any, actually—Archie Comics on a regular basis. The last Archie-Archie book I read was a Free Comic Book Day giveaway and it was reeeeeeaaaalllly hard to read all the way through, although I do occassionally pick up a Josie and the Pussycats book or appearance if the cover image grabs me, as I have a soft spot in my heart for the group and, especially, the Dan DeCarlo designs. So, obviously, I'm not the target audience for Archie Comics, before or after the redesign, but I figure I better weigh in anyway, given that commenting on comics is my job here (And by "job," I mean what I do after my actual jobs in lieu of doing something actually useful to society, like working with orphans or building homes for the homeless).

If the goal was to go more realistic, I guess you could say these designs hit the mark—they do look more realistic. But that doesn't mean they look very good. I'm a huge fan of the late, great DeCarlo's work, and seeing Archie abandon it doesn't make me happy, nor does it seem to make a lot of sense. The advantage of DeCarlo's simplified designs, in addition to their at this point being synonymous with Archie Comics and the world of Riverdale, is that they're fairly easy for other artists to ape (In the same way that DC's Justice League Unlimited series, like the various Batman, Superman and DCUniverse Adventures titles before it, assigned its artists to stick to Bruce Timm's designs and imitations of his style).

I have a feeing that this will end up being a very, very temporary change, one calculated to draw mainstream media attention and coverage (similar to the introduciton to "Third Choice" Cherry a few years back), a plan that is, so far anyway, working. After all, when was the last time any posters at Newsarama.com had anything at all to say about Archie Comics? Keep your eyes on Google News for mainstream coverage of the "New Look" Archie, and start the countdown for the inevitable re-DeCarloification.
Posted by Caleb at 7:10 PM