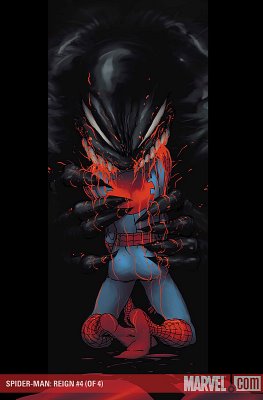 Kaare Andrews is awesome, as this cover to Spider-Man: Reign #4 so readily attests.

AMAZING SPIDER-MAN #540
Written by J. MICHAEL STRACZYNSKI
Pencils and Cover by RON GARNEY
“BACK IN BLACK ” PART 2
No one’s paid the price for Civil War more than Peter Parker. Now, one of his worst fears has been realized. A tragedy from which he might never recover. And if that weren’t enough – he’s a fugitive, hunted, on the run. Black isn’t just the color of his costume – it’s a state of mind. Get on board here, True Believer, as we gear up for an event that will forever change the life of your favorite web-slinger. There IS no going back.

Yes, no one’s paid the price for "Civil War" more than Peter Parker. Except maybe for Goliath, who had a hole blown through his giant torso, making him the first superhero to fill a mass grave all by his lonesome. 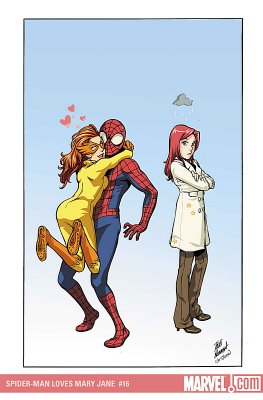 Now this is an interesting cover. I wasn’t sure SMLMJ could or should survive the departure of artist Takeshi Miyazawa, but David Hahn is a fantastic artist and storyteller. The bad news, however, is that this likely means we’ll have to wait even longer for some more of Hahn’s Private Beach series. 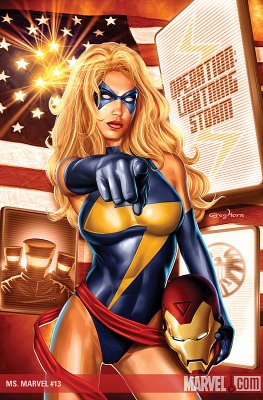 There’s an art to solicits writing, in which one must try to excite potential readers and entice them into picking up the books without spoiling the surprises within. Just saying “CLASSIFIED INFORMATION!” strikes me as a bit artless.

Would it really be so hard to say something, like, I don’t know, “You won’t believe the changes facing one of Marvel’s biggest heroes in the aftermath of the stunning, critically-acclaimed, best-stelling Civil War! The all-new status quo begins here, and things will never be the same!” To, in other words, say absolutely nothing, but in an excited way that lets readers know you at least give a shit about pretending to be saying something?

In the meantime, feel free to pore over the covers, which reveal some things (Ms. Marvel doesn’t have her face ripped off in Civil War #7, for example; and Falcon seems to survive the last battle as well). Note the field of stars glowing behind Ms. Marvel on her cover, and the fact that her curl of hair seems to form a Captain America shield with the star behind her. Hmm… 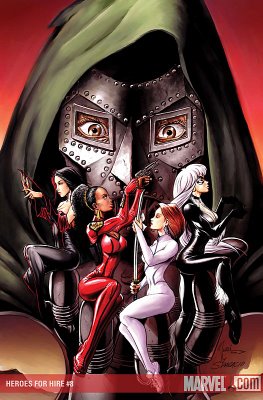 There’s probably a smart remark or fifty to make about William Tucci’s cover for Heroes For Hire #8, but I won’t make any of them.

GHOST RIDER: TRAIL OF TEARS #2 (of 6)
Written by GARTH ENNIS
Pencils and Cover by CLAYTON CRAIN
There has always been a Spirit of Vengeance. Before Johnny Blaze, before Danny Ketch, there was Travis Parham. As a lieutenant in the Confederate Army, Parham thought he’d gotten a full view of the darkness in men’s souls. He was wrong. Someone did something terrible to his friend Caleb, and Parham’s ready to ride through hell to find out who did it. Which is a good thing -- ‘cause he’s gonna have to. Up from the depths comes a force of nature that transcends his wildest dreams -- a fiery wraith that knows a thing or two about evil, and even more about vengeance.

Don’t worry about me; different Caleb.

ONSLAUGHT REBORN #5 (of 5)
Written by JEPH LOEB
Pencils and Cover by ROB LIEFELD
Variant Cover by JOE QUESADA
This is it! The heroes have assembled!! And the greatest evil the universe has ever faced is ready to take them on!!! Who lives?!?! Who dies?!?!?! And what will be the final fate of Onslaught?!?!?!?! Will this arch-fiend really be gone for good…or will we see his demonic face again in the Marvel Universe…? Only masters of full-on action, Jeph Loeb and Rob Liefeld, know for sure! All we know is this is the wildest ride on Earth—any Earth!