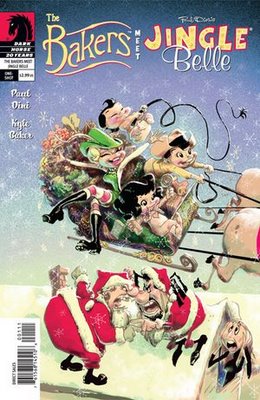 7 Brothers #3 (Virgin Comics) The mysterious Rachel leads the title characters against the King of Hell and his new bodyguard (the scary guy who killed all those gangsters last issue), and they all get killed. I kind of like the idea of the series ending here with #3—how many ongoing monthly comics end after just three issues, with the heroes all getting slaughtered and the villain winning the day? Now that would be something new and different. I think Garth Ennis, a brilliant writer responsible for some of my favorite comics, really needs a good, long sabbatical, as all of his many books have started to feel the same. Even the colorful metaphor about using the world as a condom sounds very, very familiar here, although I can’t place exactly which issue of The Punisher I read it in.

52 #33 (DC Comics) Another week, another great issue. We get Ralph and Fate visiting an Easter egg-filled Flash Museum, Nightwing flirting with Batwoman, the introduction of the new Suicide Squad, the Black Marvel Family making peace with the media and Lex Luthor using his considerable resources to present his Infinitors with lavish Christmas gifts. I have to admit, I was actually somewhat relieved when he ordered a young man in his care murdered and his organs harvested—up until that point, I was really starting to feel sorry for Luthor. This week’s issue has some better art than usual, thanks in large part to Tom Derenick, but also some troubling aspects. First up, I was pretty convinced The Question was pulling a huge practical joke on Montoya to help her quit drinking and become a better person, but this issue we see cancer-induced dementia through his eyes, so it looks like DC might be planning on killing and replacing their, what, 56th character of the year? Also, the S.S. setting its sights on the Marvel’s don’t look like they’d have much chance against Osiris and Sobek, so I can’t imagine what hope they have against Black Adam. Finally, there’s a wonderful two-page spreadin which each of the 14 panels checks in with a different corner of the DCU on Christmas. It’s a nicely written and designed section, but seems poorly executed. What’s going on in the Firestorm/Cyborg panel, exactly? Cy’s supposed to be offline. Who’s the blonde with Ollie? What’s going on in the Hawkgirl panel? And why is Commissioner Gordon smoking his pipe again?! (Don’t make me bust out scanned versions of his post-heart attack anti-smoking ads from the ‘90s, DC!) The less said about the back-up, the better, although I’ll have a lot to say on it later in the week.

Aquaman: Sword of Atlantis #47 (DC) This issue lives up to it’s name better than most in the series. Not only is Aquaman in it—and not just this new kid, but the original Aquaman—but there’s also a sword too. It’s the second part of the half fill-in story which flashes back to the first encounter between King “Aquaman I” Orin and King Shark. K.S. creator Karl Kesel co-plots with Kurt Busiek, and Phil Winslade steps in to handle the bulk of the art chores for terminally late Butch Guice (How behind is this title? Well, the DC Nation column on the back page is dated November 29th, meaning this issue is three weeks late—and this is a fill-in).

The Bakers Meet Jingle Belle (Dark Horse Comics) Two great comics talents, two great comics properties, one great comic book. Twas the night before Christmas, and the Bakers’ household is in pre-Christmas chaos; comic book artist Kyle Baker and his wife haven’t even finished shopping for their three darling, saucer-eyed children, and have little hope of finding a babysitter. Good thing Jingle Belle is in the neighborhood with her dad Santa Claus, and seeking a means of escape from her yearly chore, even if it means posing as a babysitter. Hilarity ensues and, swear to God, I even teared up on the last page. Pretty much a perfect comic book, altough the panels with the sock monkeys lost me.

Birds of Prey #101 (DC) After the radical shift in the title’s focus which kicked off last issue, the new direction is not without some growing pains and, personally, I was very pained by this issue. Gail Simone’s story and way with dialogue is still fairly strong, although BOP seems a little out-of-focus without Black Canary to act as Barbara’s other half. The new team—Manhunter, Big Barda and the new Judomaster II, wearing Katana’s cast-off Land of the Rising Left Breast costume—seems a bit forced and random. New penciller Nicola Scott’s art was by far my favorite aspect of the issue, although I hate her costumes for the new Birds, particularly Barda, whom she’s really tarted up, removing armor and slimming down her helmet to give the Spartan Apokalyptian warrior...cleavage?!

Civil War: Frontline #9 (Marvel Comics) Sally Floyd lands what she tells us is a dream interview, but then bags on it when it sounds like Captain America’s just being sanctimonious (she doesn’t even bother to ask what’s up with his size-changing neck), Spider-Man hangs out with Ben Urich (Guess he’s okay after Civil War #5 after all, then?), Speedball makes an important decision, Iron Man tells Reed Richards there’s a traitor in their midst (my guess is Yellowjacket or that dog hanging out in the lab), and Paul Jenkins compares the silly Marvel story to some real-life tragedy or other for the ninth time in a row (I’ve quit reading the back-ups).

Darkman Vs. Army of Darkness #2 (Dynamite Entertainment) I’d really forgotten what a cool comic book-style superhero Darkman would make, and now that the surprise of this clever mixing of two Sam Raimi-created film heroes has worn off, I find myself wanting more Darkman and less Ash, which I’ve more than had my fill of at this point.

The Lone Ranger #3 (Dynamite) Writer Brett Matthews adds two more elements to the Lone Ranger legend in this re-constructionist, “Year One”-style approach to the character and, like the last two issues, it’s fairly dripping with awesomeness. It’s a slight issue that practically flies by, but it seems building to something quite explosive, based on how incredibly evil Black Bart is and how badass young John Reid is.

The New Avengers #26 (Marvel) After a string of done-in-one stories breaking up the team and showing which side each of them will take in “Civil War,” Bendis turns his attention from his New Avengers to focus on some Old Avengers, namely Scarlet Witch and the resurrected Hawkeye. I read “Avengers Disassembled,” I read “House of M,” and I’ve read every single issue of New Avengers, and I still couldn’t really make heads or tails out of this issue. I suppose the hows and whys are intentionally mysterious, but some elements were so vague they seemed more confusing then intriguing. One thing is for sure though— Alex Maleev sure makes a pretty comic book, handling the art all the way down to the colors in this issue.

The New Avengers: The Illuminati #1 (Marvel) When I first encountered the men who secretly ran the Marvel Universe in Brians Michael Bendis’ otherwise uninteresting “The Sentry” arc of New Avengers, I was intrigued by the idea of an MU version of the Illuminati, and instantly wanted to see more of it in action. Well, you know what they say about being careful what you wish for. We next saw the Illuminati in the weird New Avengers: The Illuminati one-shot which presaged “Civil War” (although none of those who expressed opposition to Iron Man and Mr. Fantastic have done anything to stop their current rampage), and now the team is back in a miniseries which will explore their past history. It sure sounds like a cool idea for a comic book, and BMB teams up with co-writer Brian Reed and Young Avengers penciller Jim Cheung (who has plenty of free time these days with that title on indefinite hiatus) to deliver it. The results, however, are a weird mix of super-specific continuity and off-base characterization. This issue takes place post-Kree/Skrull War (which I never read; before my time), and the Illuminati teleport onto a Skrull spaceship to tell them never to attack earth again or, in Iron Man’s words, “we’ll come at you.” The Skrull ruler responds that they’ll kill everyone on earth, starting with the heroes’ families, so the assembled heroes do what any other hero would do in their situation—they slaughter each and every one of them. Now, given Richards' and Starks’ actions in “Civil War,” taking scores of lives doesn’t seem that out of character for them to me anymore, and Dr. Strange and Namor can be hard, heartless bastards now and then, but no matter how hard I try, I can’t see Dr. Charles Xavier, the Martin Luther King of mutantdom, agreeing to this plan. Of course, on the last page the Skrull king guy isn’t wearing so much as a Band-Aid, so maybe they didn’t kill them all after all? I don’t know; I guess I just don’t know enough about Skrull biology and Blackbolt’s powers to be able to even make sense out of this goddam comic.

She-Hulk #14 (Marvel) This issue is entitled “Everything You Always Wanted To Know About Awesome Andy But Were Afraid To Ask,” which pretty much sums the story up. Andy narrates his life story and comes to a very final decision, one that seems to write him out of the title for the foreseeable future.

Teen Titans #42 (DC) Wow, this may just be the best issue of the entire series so far. Guest artist Peter Snejbjerg is a great draftsman, a great storyteller and a great designer, and I don’t think the interiors of this book have ever looked better (too bad “regular” artist Tony S. Daniel gets named on the cover credits, not Snejbjerg). The story, by Geoff Johns, follows Kid Devil, telling us not only how he became a real Kid Devil, but also re-telling his entire origin. Johns rather deftly weaves a continuous story arc from way back to Blue Devil, one which runs through and recaps events from Underworld Unleashed, Justice League of America, Starman, Day of Vengeance, JLA: Black Baptism, 52 and Teen Titans, connecting all the dots to make for a dramatic story with a great pay off.

Ultimate Spider-Man #103 (Marvel) Holy crap! Brian Michael Bendis has packed brain-blowing twists into this story arc, twists that have been building off of over 100 issues full of momentum and, in this particular issue, we learn that even some of those twists have twists. Confidential to Ben Grimm: Shouldn’t you have said, “Why don’t you take that crappy haircut of yours and shove it up your ass?”, rather than, “Why don’t you take that crappy haircut and shove it up my--?” Because the way you said it makes you sound like a pervert.

Union Jack #4 (Marvel) Christos N. Gage and Mike Perkins end their miniseries pitting the blue collar British Captain American and his international allies against international terrorists and a surprise puppet master. Nothing terribly deep, but still pretty fun. If you missed this ad-tastic story and dig straightforward superhero action, I'd reccomend the trade collection, should it ever earn one.
Posted by Caleb at 9:22 PM