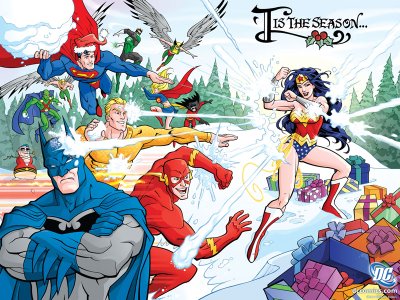 DC Comics' website has a holiday card image available for download, and the characters shown frolicking in the snow on it are in sharp contrast to the characters currently starring in DC Comics. The image is a fairly cute one riffing on Wonder Woman's bullets-and-bracelets schtick, with the heroes of the DCU hurling snowballs at the Amazon heroine, who deflects them back in their faces.

You've got the two pillars of the DCU front and center, with a grim and gritty Batman frowning at the fun and Superman wearing a Santa hat. Also present are Hawkgirl and Green Lantern, who both star in their own series and the new JLoA, the new Supergirl, and Robin, wearing a costume that should be unfamiliar to anyone not reading Robin, Teen Titans or either of the two flagship Batman comics.

But as for the rest of the heroes pictured here, you'll have to look awfully hard to find them in DC Comics this holiday season.

In the background, there's Plastic Man, using his shape-changing abilities to look like a snowman. Plas' monthly, written and illustrated by Kyle Baker, was cancelled about the same time Infinite Crisis was rejiggering DC's fictional shared setting, and he's been MIA from the JLA for just as long. His only recent appearance was in the pages of Superman/Batman, where we learn that he is indeed a former deadbeat dad, as Joe Kelly revealed during his JLA run (and Baker undid through some clever tongue-in-cheek time travel in the monthly).

Then there's J'onn J'onnz, the Martian Manhunter, in his classic look. You know, the one he sports in the Cartoon Network Justice League shows, as well as the first, oh, 40 years or so of his comic book adventures. Nowadays, however, he sports a head-to-toe black costume, and has altered the shape of his face and head so he resembles a green Conehead, a Marvel Skrull, or an Aliens alien, depending on who's drawing him and what angle he's shown from. He's also been MIA from the JLA since IC.

To J'onn's left is Hawkman, the hero who lost top-billing in his own title to his partner Hawkgirl, and who has been missing from the DCU since IC.

In the foreground, there's a Flash, who could be Barry Allen, Wally West or Bart Allen. Of course, the first of those is dead, the second (the Flash of the last 20 years and the character in the Cartoon Network shows) is lost in time, and it's the third currently starring in Flash: The Fastest Man Alive, one of DC's most unreadable current titles.

Next to this Flash, whoever he is, you'll find Aquaman, with both of his hands. Aquaman also lost his the starring role in his own title, which was renamed Aquaman: Sword of Atlantis and now revolves around a new Aquaman whose costume doesn't resemble that of the one featured here; that Aquaman has grown a weird beard of tentacles and forgot his own name and identity, going by the name "Dweller of the Deep" and playing Obi Wan Kenobi to the new Aquaman's Luke Skywalker.

Finally, the focus of the image is Wonder Woman, supposedly DC's third most important character. Her title has been rather troubled since it's recent relaunch, coming out on an occasional bimonthly schedule. She appears more often in JLoA, which has managed five issues in the time it's taken Wonder Woman to come out just three times.

I wonder why DC used Aquaman and Martian Manhunter's "classic" looks here, instead of their new ones? Could it be that the classic ones are instantly recognizable, whereas the new ones are strange, unfamiliar and off-putting? Only Santa knows for sure.
Posted by Caleb at 7:50 PM