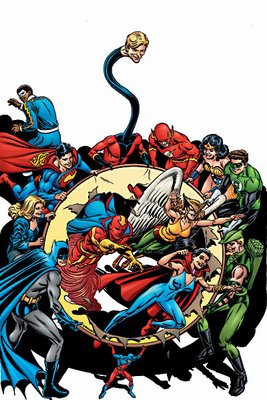 Okay, I give up. I have no idea what Black Lighting is doing slinking away on the cover of The Justice League of America Hereby Elects..., but he sure does look guilty, doesn't he? I didn't pick this trade up, so I don't know exactly what happens in the Black Lightning story, but since I know he didn't end up joining the Justice League, I'm going to assume his tiptoe-ing away while the rest of the League is distracted by their crazy pep rally is meant to suggest that he turns them down. But damn, did they have to make it look like he just stole Superman's wallet? 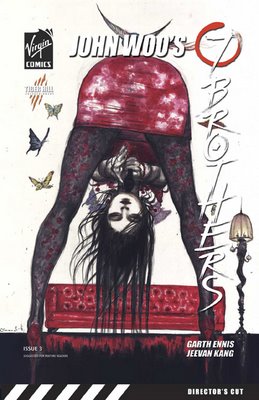 I can't even make an educated guess about the cover of 7 Brothers #3. There is an Asian woman in the story, I think—it's a little hard to tell what Rachel's nationality is given the dark, murky coloring of the book and Jeevan Kang's sytlized character designs—but she never dresses anything like this, nor carries a gun, nor bends over to shoot anyone between her legs. It's an interesting image, and I love Yoshitaka Amano's art, but what the hell is going on here, exactly?
Posted by Caleb at 3:31 PM

The Seven Brothers #3 cover did indeed seem oddly random, although, it did stand out from the other covers; at a glance all of the previous Seven Brothers variant covers that I've seen have looked the same (does that sound racist?).