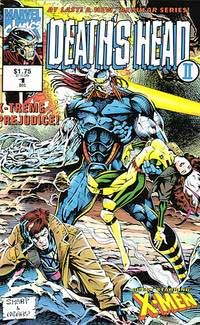 Why’d I wait?: These three issues came out in 1993, back when I was still in high school and only reading a handful of monthlies. At the time, I wouldn’t have dared touch an X-Men comic, which I would have associated with the X-Men cartoon on Fox, perhaps the funniest half hour on television of all time.

Why Now?: A friend of mine was moving and knowing that I read comics, stuffed these in my mail box instead of the recycling bin. Why did she have these? Back in the ‘90s, she said she went on two dates with a comic book writer who wrote Death’s Head for Marvel UK. In the process of trying to explain what he did for a living to her, he gave her these three issues. She couldn’t remember his name though, so it’s unclear if it was the writer of these particular issues, or another writer entirely. Obviously, the dates didn’t leave much of an impression on her.

Well?: Having missed the first issue (the cover of which is above, since I couldn’t find any others to use with this piece), I was a little lost as to who exactly Death’s Head was, and why he was named like a sequel to a movie rather than going by Death’s Head Jr. or Death’s Head the Second.

I was even more lost by the weird plot involving giant inter-dimensional monsters called The Raptors (who did not at all resemble birds of prey, but more like the Hulk crossed with aliens from Dragon Ball Z), an evil creature named Wrathchilde that had a head shaped like Death’s Head and a wardrobe like Spawn’s hand-me-downs, and a scantily clad, poorly rendered woman who goes by the name Tuck.

They’re all after the Sapphire Lotus, some magical Maguffin that D.H. doesn’t want them to get because, well, I don’t really know—something about a different dimension where everyone dresses even worse than the X-men, like the Negative Zone inhabited by a race of Terrible Character Designs.

My years laughing at the X-Men cartoon helped me understand this story much better, as the team make-up, their characterizations and their character designs are of the same era as the ‘toon.

In #2, a chapter of “The Lotus FX” arc entitled “X-cuses! X-cuses!”, Wolverine, Cyclops, Gambit, Rogue, Beast, Jubilee and Psylocke are in the middle of fighting the goofy-looking cyborg monster that is Death’s Head, before they ultimately team-up in their quest for the Lotus (I guess the venerable Marvel tradition of fighting and then teaming-up held true at Marvel UK as well).

It’s hard to get past the eye-assaulting art and the aesthetic crimes of the character designs to read the story itself, but perhaps that’s for the best—it’s not a very good story, and there were times I wondered if having read #1 would have actually helped me understand it any better or not. Abnett has definitely improved as a writer in the decade that followed.

Death’s Head himself seems like a mildly interesting character, some sort of decomposing body with a cool name wearing a cut-away (battle-damaged?) scary mask, and with some sort of morphing arm powers. Unfortunately, he sort of looks like half of he characters in the Image Universe when it was first launched.

Sharp’s artwork is about as ‘90s as you can get, with plenty of background-less splash pages. Four panels seems to be the largest amount of panels on any one page. Sharp’s grasp of anatomy is questionable at best, and Psylocke seems to give Sharp the most trouble. In most panels, she seems to be a sort of mannequin totem pole, with a head stacked atop a pair of breasts stacked precariously upon a giant set of hips, with legs like towers at the bottom.

As issue #3 drew to a close, with Tuck hanging by her Vampirella-esque bathing suit by a tree, I was struck by the rampant sexism and misogyny that drips off every panel, but #4 made me realize that it’s not just the ladies whose bodies are over-idealized into unrecognizability and given to being posed suggestively and in states of undress.

This concluding chapter, entitled “X-Terminations,” has Death’s Head and the X-Men facing off against Wrathchilde and his Raptors in a battle in which the only casualties are the X-Men’s costumes. Wolverine loses his shirt completely. Cyclops has half his torn off, revealing his nipple. Rogue has her jacket ripped off and her uniform shredded, so that by the end of the book, her breasts are spilling out of the rips (If Sharp were drawing her anatomy correctly, her nipple would be visible as well), and another tear on her hip reveals as much flesh as they can get away with in these pre-Max Comics imprint days.

Poor Psylocke, who’s costume was already a one-piece bathing suit with one of the most dramatic thongs in all of a comicbookdom, has her uniform shredded as well. In a fierce battle, Sharp gives us a long shot panel of this shredding, with the back of Psylocke’s costume being torn off, and the thong ripping. In the last panel, which is simply the now near-nude X-Men posing, Psylocke is in the back, her costume now just a bib covering the top half of her breasts and a matching loincloth.

I think Death’s Head II himself best summed up my feelings about these three issues early on in the adventure, when he said “Arrghhhhhhhhhh…That hurt.” It sure did, Death’s Head II. But your pain is only fictional; mine is all too real.

Would I Go Back in Time to Buy Them Off the Shelves?: If I could go back in time to when this was actually on the shelf, I’d run into comic shops and scream like a prophet of doom about the upcoming crash of the market, and that all speculators are just totally wasting their time.

That, or maybe I’d bring a copy of Grant Morrison’s New X-Men Omnibus with me just to blow the minds of the X-Men fans of 199s.

Special note: The penultimate page of #2 contains a panel of Tuck, hyped up on lotus “FX” punching Death’s Head in the face and sending him flying. The sound effect used to simulate the sound of her punching his metal face is “WHANNGG!” It’s placed over the sprawling Death’s Head’s crotch. Coincidence, or dirty joke?