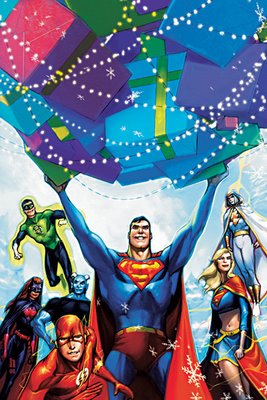 After long moments of reflection, and a very, very thorough flip-through (which included reading the last story in its entirety), I ended up leaving the DCU Infinite Holiday Specia on the shelf this week.

I’m glad you asked, let me tell you. At great length.

Let’s break it down:

Green Lantern by Keith Champagne and John Byrne: Jordan is not my favorite of Earth’s Green Lanterns. In fact, he’s my fifth favorite. Champagne is a fine inker, and, as he proved during his fill-in stories on JSA, a decent writer, too, but I’m already getting stories featuring this Lantern twice a month in Green Lantern and JLoA, so a third dose didn’t exactly excite me. As for the penciller, well, the less said of Byrne’s latest round of DCU work the better, although I will note that the artwork on the story didn’t look like that of John Byrne to me during the flip-through.

Supergirl by Joe Kelly and Alé Garza: No complaints about the creative team here. Kelly is a hell of a writer, and his recent Superman/Batman Annual was cover-to-cover fun. And I do like Garza’s art; he did a fantastic job on Batgirl near the end of the series, although few people seem to have read it (particularly those writing and editing Bat-family books at the moment). But Supergirl? Bleah. I gave the most recent Maid of Might a fair shake, I think. I read the entire six-part “The Girl From Krypton” arc in Superman/Batman, and kept waiting for Jeph Loeb to pull the rug out from under me, as I knew full well her origin couldn’t be as cut-and-dry as he presented it. But he never did. I even read the first five issues of her solo title, which was nothing but a series of fights with other DC heroes, but Loeb still hadn’t pulled the rug out from under me. Then I just gave up, dropping the title and seeking to avoid this vacuous, scantily clad cypher of a character.

Shadowpact by Bill Willingham and Cory Walker: This was one of the more tempting short stories in the book. I never really got Shadowpact, which seemed to be a less clumsy, less necessarry name for the Sentinels of Magic team, and didn’t bother with their monthly series, based on how terrible Day of Vengeance and its Infinite Crisis tie-in special was. I liked the image of Phantom Stranger wearing a Santa hat, and the idea of Santa interacting with Blue Devil, but my aversion to Willingham’s DCU writing outweighed my interest in these images.

Shazam by Tony Bedard and Marcos Martin: Well, I suppose it could be less attractive; it could be a Marvel Family story written by Judd Winick, but, in this case, it’s the direction of the character more than anything else that repels me. I find it ironic that DC has launched this radical new half-assed direction for the Marvel Family, changing Captain Marvel’s name, look, purpose and place in the DCU at the same time that 52 and Justice are making such good use out of the Marvel characters in the classic mold (and Jeff freaking Smith has a high-profile Captain Marvel project waiting in the wings). Cooler heads will eventually prevail I’m sure, and this weird-ass take on the character will soon be undone and forgotten, but, in the meantime, it means ignoring Captain Marvel—er, “Shazam,” until someone smarter than Winick gets a chance to chart his future.

Flash by Ian Boothby and Giuseppe Camuncoli: See above. I was still getting used to the idea of Bart Allen trading his codename and personality in to become the new Kid Flash when DC shunted Wally West off to limbo and rapidly aged Bart into the Flash for absolutely no reason. Unlike the ill-considered new directions thrust upon Captain Marvel and Martian Manhunter, I haven’t even given the Bart Flash a chance, as I expect this direction to be changed even more quickly.

Batwoman by Greg Rucka and Christain Almay: I loved Rucka’s Oni work and much of his Bat-stories, particularly his post-“No Man’s Land” run on Detective Comics, but in the ramp-up to Infinite Crisis, his stories were one let-down after another. Between Superman, Wonder Woman and The OMAC Project, it was increasingly clear that Rucka had very little familiarity with any of the characters he was writing, and next to none with their convoluted histories (what we comic geeks like to call “continuity”). And that would be somewhat excusable if the stories themselves weren’t built on continuity. The surprises, the twists and turns, if you will, of them all was seeing turning points in relationships, betrayals by close friends, and were all precipitated on an understanding of who the characters were and how they related to one another (Max Lord and Blue Beetle’s long relationship in the pages of Justice League comics, Batman and Sasha Bordeaux’s past romance in Batman comics, etc.), which made it all the more infuriating when about 50-percent of that was wrong. For a perfect example, see the last issue of the last volume of Wonder Woman, the whole point of which is an examination of the historic relationship between Wonder Woman and Superman, and which has at least one mistake per page on it. All of these stories were set prior to the Great Continuity Re-Jiggering that reformed Post-Crisis Earth into “New Earth,” and the only explanation for them is that Superboy-Prime’s escape from “The Heaven Dimension” (No, really, that’s what they call it; and sorry, but I can’t type that name without quotes around it) altered the timestream (i.e. continuity), as was half-assedly explained in Infinite Crisis Secret Origins and Files #1. Anyway, long story long, I had resolved to avoid Rucka DCU stories. And that’s what this is.

Superman and Batman by Kelly Puckett and Pete Woods: The “Elseworlds” slug in the hilarious last panel makes over obvious that this Ironic Age take on the Silver Age Superman/Batman team shouldn’t be considered “continuity,” but it’s funny nonetheless. Six more stories like this, and the book would have been a must-buy.

That leaves us with just two more aspects to take into consideration: The cover and the official holiday greeting.

Let’s take that latter one first. The last page featured a splash drawn by...Phil Jimenez?...which shows DC editorial, with Dan Didio front and center with a holiday greeting. Funny stuff, and a very busy image, one that sure beats the hell out of Ralph Machio’s letter in last week’s Marvel Holiday Special (In a DC vs. Marvel sense, this book does seem to be a better value, in terms of story pages to dollar amount ration). Note the female editor embracing the alpaca in the background; I take it that’s Jann Jones, who’s fondness for alpacas is a running joke in Didio’s “DC Nation” columns. (Don’t forget Ms. Jones; I’ve got a sweet proposal for an Alpaca Man comic book!)

Now about that cover. Howard Porter’s new “Shazam style” is an interesting evolution in the artist’s work; it was about the only thing I enjoyed in the Brave New World preview and first issue of Trials of Shazam. This image is in that style, but its composition seems a little off, with the characters sort of randomly situated on it. What really scares the hell out of me is that crazy look on Superman’s face, those rosy cheeks, that glazed look in his eyes. Coupled with the giant sack of presents held above his head. I get the feeling he’s about to hurl the gifts at me, crushing me to death.

Finally, what’s up with the title change? When the project was announced, and discussed with Newsarama, it was called Infinite Christmas Special, which was a play on the name of Infinite Crisis, the logo of which this books logo references. In fact, if you look it up at dccomics.com, you'll find it's still called DCU Infinite Christmas Special. But when it hit the stands this week, it had become the Infinite Holiday Special, which essentially neuters the joke. Not that it was a terribly clever joke, but it was funny in a bad joke sort of way. The new title is simply nonsensical. Bill O'Reilly, John Gibson and maybe even Hawkman would not be amused.
Posted by Caleb at 6:53 PM