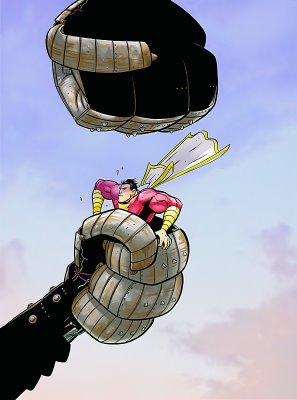 DC Comics has released their solicits for books shipping in March; you can read them at the company’s homepage, at Comic Book Resources, where you’ll find a more reader-friendly format, or at Newsarama, where there’s the added benefit of pages and pages of nerd commentary (much of it dealing with homosexuality, oddly enough).

Is three months prior to release too early to start commenting on the books? Nah. Here are a couple of the solicitis that really grabbed my attention…

BATMAN CONFIDENTIAL # Written by Andy Diggle. Art and cover by Whilce Portacio & Richard Friend. Part 4 of the 6-part “Rules of Engagement.” Lex Luthor has supplied his prototype G.I. Robot to the military — and only Batman knows there’s a viper in the Pentagon’s nest. But Lex Luthor knows as well, and attacks Batman in the Batcave to prevent being exposed!

This is one of my favorite solicits of the month, as the phrase “only Batman knows” is followed immediately by one reading “But Lex Luthor knows as well.” You know DC’s continuity problems are getting bad when there isn’t even continuity between consecutive sentences in the solicits. 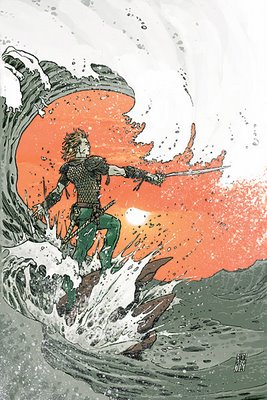 Mario Alberti sure created a nice cover for Aquaman: Sword of Atlantis. I was a little annoyed that the creative team that launched the title's bold new direction are giving up on it before even bringing said story to a close, but not so annoyed I’d miss a cover like that. 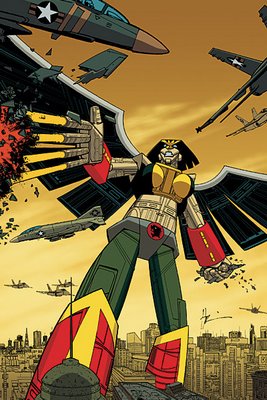 And speaking of covers, how about that Hawkgirl cover? I dropped this title after a one issue, but I don’t think there’s anyway in hell I’ll be able to resist buying an issue with a giant, robot Hawkgirl on the cover.

BATMAN: DETECTIVE TP Written by Paul Dini and Royal McGraw. Art by J.H. Williams III, Don Kramer, Joe Benitez and others. Cover by Simone Bianchi. Don’t miss this all-new collection of mystery stories from DETECTIVE COMICS #821-826 written by Paul Dini (Batman: The Animated Series)! The Dark Knight faces the Riddler, the Penguin and Poison Ivy as well as brand-new villains while pushing himself to the limit to solve crimes.

This trade collection of the first few issues of Paul Dini’s run on Detective will likely be a heavily-read issue. Dini’s done some of the best Batman stories ever on Batman: The Animated Series, and has been no slouch in the comic book department either (Batman: Mad Love, Batman: War on Crime), but why on earth are they even bothering to include the one-issue fill-in written by Royal McGraw? I bought said issue, accidentally, and it was the very definition of a mediocre comic book. I can’t imagine a single person buying this trade thinking, “Sweet! Royal McGraw! I so wanted to read his one issue of ’TEC, but I decided I’d wait for the $15 trade instead!”

If an ideal “graphic novel”/trade paperback has a single creator or creative team (or, at the least, creative vision), than the Mcgraw story sticks out like a sore thumb here.

And if DC is smart about their trades, encouraging their hardcore readers to either read single issues only (or single issues followed by trades collecting the same stories), and targeting different audiences with the trades, why include the McGraw story? It’s a perfect chance to not collect something, and encourage a sense of urgency to buying the monthlies, in essense saying, “If you’re not reading every issue of Detective Comics, you’re missing out!” (Of course, you’re not actually missing out—like I said, that McGraw story is pretty bad—but still).

After all, it’s not like DC is devoted to making sure every single issue of ’TEC is available to readers, so the completionist impulse here seems a little out of place.

ROBIN #160 Written by Adam Beechen. Art by Freddie Williams Iii. Cover by Patrick Gleason & Rodney Ramos. There’s a new drug hitting the Gotham underground, and it’s turned a common street gang into brutal murderers. Now Robin faces two perilous missions: Stop the gang before they strike again, and find the source of the drug before it creates more killers!

I’ve lost count of how many “new drugs” have hit the Gotham underground in the 12 years or so I’ve been reading Batman comics. Maybe the low thirties?

ACTION COMICS #848 Written by Geoff Johns & Richard Donner. Art and cover by Adam Kubert. Part 4 of the landmark “Last Son” story, by Geoff Johns, Richard Donner and Adam Kubert! Superman travels to a place so alien and strange, it could only be presented in a special 3-D section, featuring 3-D effects by Ray Zone! That’s right, the action in ACTION takes on a whole new meaning as this benchmark story takes a sharp turn into the third dimension! Plus, meet the all-new Superman Revenge Squad!  Retailers: This issue will be available in 2 versions that may be ordered separately. The 3-D Edition is priced at $3.99 and the Standard (non-3-D) Edition is priced at $2.99. They will feature the same cover image. The 3-D Edition will feature portions of the content and the cover in 3-D; 3-D glasses will be included.

This solicit isn’t as elegantly and concisely contradictory as the one for Batman Confidential, but near the end it still manages to say the exact opposite of what it said previously. It says “it could only be presented in a special 3-D section,” but, obviously that’s not the case, if they’re also selling a version of the story that doesn’t include a 3-D section.

JUSTICE LEAGUE OF AMERICA #7 Written by Brad Meltzer. Art by Ed Benes & Sandra Hope. Covers by Benes & various. Variant cover by Michael Turner. Best-selling author Brad Meltzer and super-hot artist Ed Benes deliver what you’ve been waiting for: the debut of the new Justice League of America! This issue features an incredible 4-page foldout you won’t want to miss! Be here for the introduction of the new team headquarters, plus many other cool surprises! Retailers please note: This issue will ship with three covers. Standard Edition Cover A and B are by Ed Benes & Various; when displayed side-by-side, these covers form a larger image featuring the JLA of the past and present. One copy of the Variant Edition, featuring a cover by Michael Turner, may be ordered for every 10 copies of the Standard Edition Cover ordered in any combination. The full Benes cover image will be revealed on dccomics.com.

The solicit for JLoA devotes 50 words to describing the content of the story and the man writing it. Then it devotes 70 words to explaining the variants.

Even more depressing is the fact that it will take us until the seventh issue of this series to have the line-up solidified and their base revealed. Contrast that with JSoA, which solidified the line-up and introduced their headquarters in just 37 pages last week.
Posted by Caleb at 2:11 PM