As some of you noted during a previous installment of "Friday Night Fights" looking at the prelude to the JLA vs. X-Men rumble in All-Access #4, that battle between Marvel and DC's premeir super-teams was a horribly uneven match-up.

Not only could most JLA line-ups topple most X-Men line-ups without breaking a sweat (and if Jean Grey, Colossus and Rogue aren't on the team at the time, the X-Men are better off not even leaving the mansion), but this was the core of the strongest League (The Big Seven) vs. a particularly pathetic version of the X-Men (Jean Grey, Storm, Cyclops, Iceman, Bishop, Jubilee and friggin' Cannonball).

A lot of really dumb things happened during that fight, things that shouldn't have happened even if the five members of the Justice League with super-speed promised not to use it. You had Jubilee taking out The Flash. You had Iceman's ability to freeze things matching Green Lanterns ability to do anything. And you had Cannonball trading punches with Aquaman for panel upon panel.

But nothing was dumber than the Martian Manhunter vs. Bishop fight.

Now, remember, J'onn's powers are basically Superman's, plus Charles Xavier's, plus Plastic Man's, plus The Vision's, right? Bishop's power is to absorb and redirect energy. And he may also have superstrong wrists able of supporing one giant gun in each hand, and the Atlas-like stamina to support the weight of gigantic shoulderpads—I'd really have to check a Official Handbook of the Marvel Universe to be sure of those last two.

Here then is every panel of their fight, before Bishop wanders off to help Iceman against GL, and J'onn decides to put Cyclops in a full-nelson: 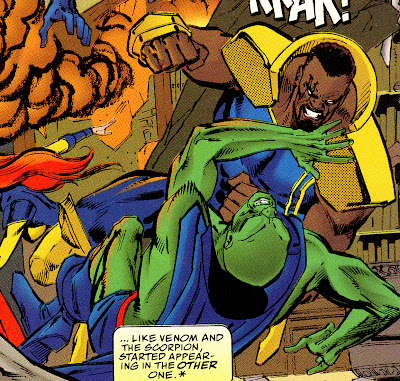 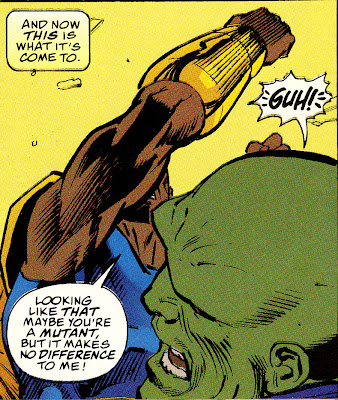 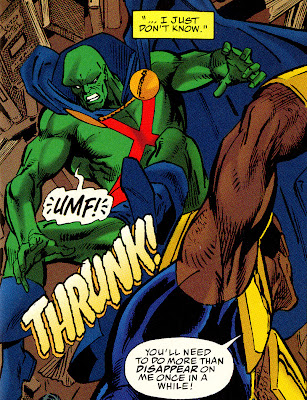 J'onn, I'm not even going to comment on this one. You know better than that. What the hell happened there, man? Did you show up to the crossover drunk or something? Did you just feel sorry for the X-Men and want to give them a fighting chance? Did Jean Grey psychically make you forget your other 13 super-powers before you guys got into it?

I just hope this story is out-of-continuity now. For your sake.

What the heck? J'onn should be able to take most of the X-men on with one arm behind his back and his eyes closed! He makes gold out of seawater for heaven's sake! He reads minds! He eats cookies!

That's terrible! Agggh! How does Bishop even get the opportunity to land a punch? I mean, I guess if MM used his heat-vision Bishop could absorb it and fire it back, but that wouldn't hurt MM. Then J'onn could just punch Bishop's head off, and that would be that. Mind you, this is me trying to make the fight last. that's all I could come up with. I didn't think anything was dumber than Lobo losing to Wolverine (without the adamantium).
I wouldn't have minded a J'onn versus Colossus fistfight, but that's only because they are two of my favorite characters.