The Not-Very Challenging Foes of the Super Friends

Lex Luthor! Gorilla Grodd! Solomon Grundy! Brainiac! Sinestro! Mean Bizarro! (And seven other pretty much useless weaklings just there to make the line-up an even, evil thirteen!) Yes, on 1978 cartoon series The Challenge of the SuperFriends, the superheroes were faced with some of the most sinster, powerful villains that DC Comics owned the rights to.

In the comic book based on the various Super Friends cartoons however (yes, the comic book based on the cartoon that's based on the comic books), the world's greatest heroes had to settle for some decidedly lower-tier advesaries. I can't tell if they were fourtunate or unfortunate to have to face such easily vanquished opponents. On the one hand, I'm sure you're better off mixing it up with anyone on this list than, say, an evil psychic gorilla or an unkillable swamp zombie, so they're probably a safer group to do battle with. But, on the other hand, there's no shame in Lex Luthor or Brainiac temporarily getting the upper-hand over you, but Green Thumb? That's just embarassing.

Anyway, some of the comic book Super Friends' less-than-impressive archvillains... 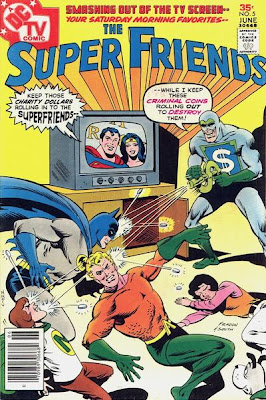 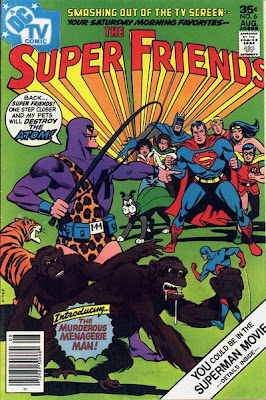 (Psst! Robin! You forgot your glove!) 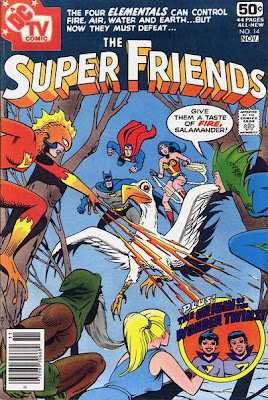 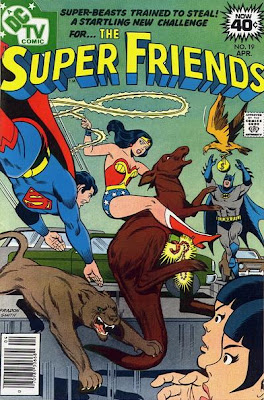 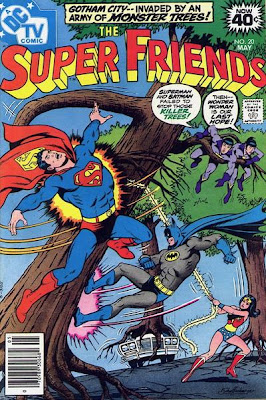 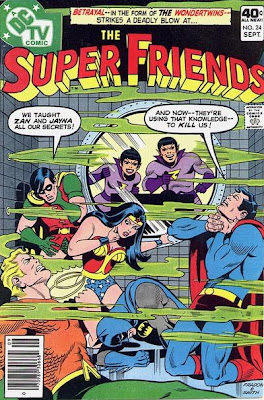 Zond and Zhanra, evil doubles of the Wonder Twins! 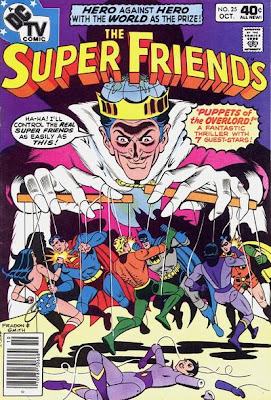 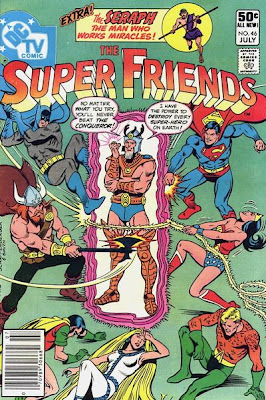 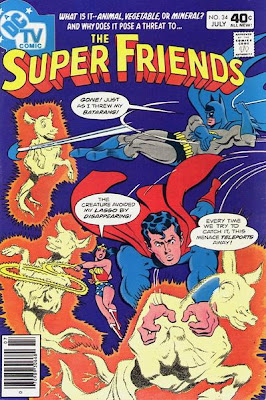 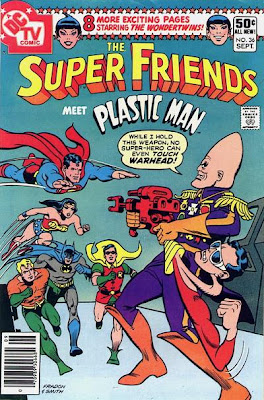 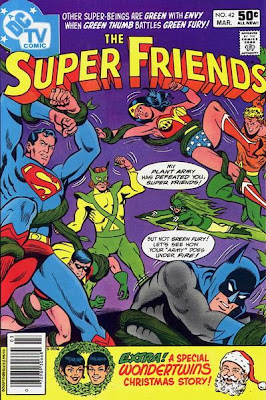 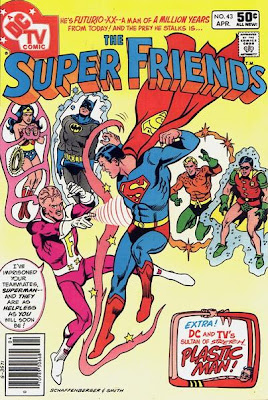 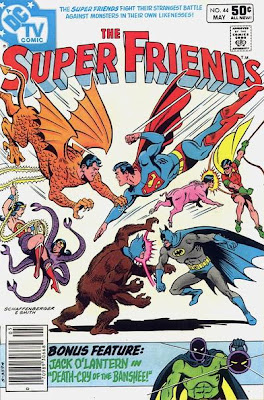 Please note, these things all do look kind of dangerous. All except the one fighting Robin, which appears to just be a pig, with Robin's head on it. I wonder why all the other Super Friends get to fight terrible monsters with their own heads on them, and Robin is faced with a small, barnyard animal with his own head? I mean, yeah, that'd freak you right out if you saw a pig with your head vaulting at you like that, but still, not exactly in the same league as a four armed gorilla or a dragon with your head on it.

And now, we interrupt this post for a special message from Aquaman:

Did you hear that, Hal? Katar? Flash?

If not, I'll repeat it for you: "The world's four greatest heroes...Superman! Wonder Woman! Batman! Aquaman!" Hear that? Four. The so-called "Trinity" plus one more. Me.

So go ahead, don't invite me to pose on your stupid teaser image. Put Geo-Force and Red Tornado on the freaking Justice League while I languish in limbo. I ain't scared. I'm one of the world's four greatest heroes.

I'll be back with my own #1 and spot on the League soon, and Geo-Force will be back to begging for guest-appearances in Titans specials. Just you wait.
Posted by Caleb at 1:16 PM

Sorry, pal, but...
You were on a team with a second rate Scooby Doo.
Not exactly what you want everyone to remember when promoting yourself.

The Wonder Twins had ... evil twins?

I love the expression on Aquaman's face when the shark comes after him. He's like, "fishy -- please."

Oh this is just magnificent. Horrifying yes, but still magnificent in all its cheesiness.

I remember getting this as a kid and really being freaked out by those things. Can't remember much about the issue, but that cover has been burned into my brain. I'd pretty much forgotten about it. Thanks, man.

Pfft, it's DC. They have, like, 9,000 different universes. Surely, Aquaman isn't a complete loser in one of them. That's not the way to bet, of course, but the slim possiblity does exist.