Last night we launched our monthly preemptive attack on DC's November releases, and today it's Marvel's turn. Who turned in the worst image for a cover this month, Greg Horn or Michael Turner? Find out below! 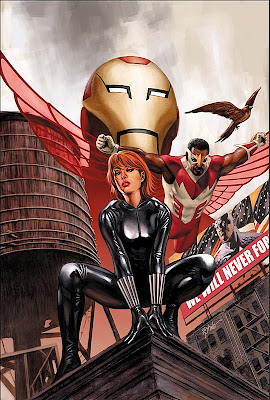 
CAPTAIN MARVEL #1 (of 5) Written by BRIAN REED. Penciled by LEE WEEKS. Cover by ED MCGUINNESS. From the pages of CIVIL WAR comes the tale of a man out of time! An accident in the Negative Zone propels Captain Marvel from the past to the present day. Now he must come to terms not only with his own impending death, but with the way the world has changed in the time he has been gone. Brian Reed (NEW AVENGERS: ILLUMINATI; MS. MARVEL) and Lee Weeks (DAREDEVIL; SPIDER-MAN: DEATH AND DESTINY) bring you the mini–series that returns one of Marvel's greatest heroes back where he belongs.

Given the rather random and silly way he was brought back—accidentally pulled through a wormhole in time as a result of Reed and Tony building a prison camp in the Negative Zone and then being given a job as a prison warden—I can’t imagine actually wanting to read this series come November.

But, on the plus side, at least Paul Jenkins isn’t writing it. 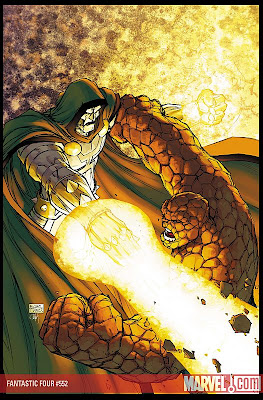 So based on the cover, where do you think this issue of Fantastic Four is set? Outer space? A disco? A post-modern art museum? 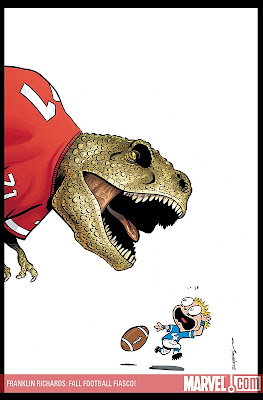 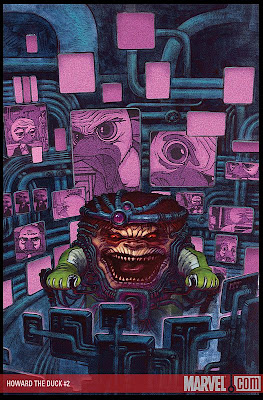 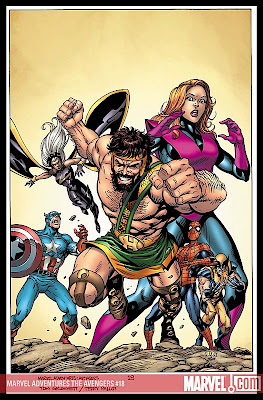 MARVEL ADVENTURES THE AVENGERS #18Written by TY TEMPLETON. Penciled by CAFU. Cover by TOM GRUMMETT. After centuries of imprisonment in solid rock, the legendary HERCULES breaks out into the modern world. And if you think YOU get up cranky in the morning, you should see Herc after a thousand years of down time. Will the Avengers be enough to stop a man-god gone mad?

Noooo! It’s not written by Jeff Parker! But it is written by Ty Templeton. And it does feature Hercules.


MARVEL ADVENTURES HULK #5 Written by PAUL BENJAMIN. Penciled by DAVID NAKAYAMA. Cover by JUAN SANTACRUZ. Bruce, Rick and Monkey seek out Dr. Strange, hoping the master of the mystic arts can cage the fury of the Hulk. But Bruce gets more than he bargained for when Dormammu, Prince of the Dark Dimension, takes control of one of his allies. Can even the combined strength of the Hulk and Earth’s Sorcerer Supreme stand against the awesome might of... Dormammu-Monkey!

I have no idea who this “Monkey” character is, or who any of these creators are, or if the MA version of the Hulk book is any good or not, but I really, really like the sound of “Dormammu-Monkey.” And if it ends up being a monkey with a head like Dormammu, then I’m all over this issue. 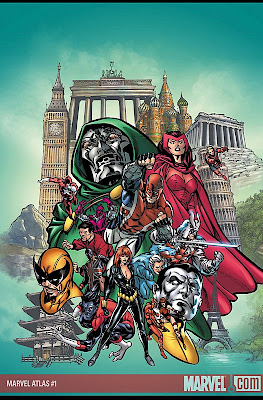 MARVEL ATLAS #1 (of 2)
Written by MICHAEL HOSKIN, STUART VANDAL, ANTHONY FLAMINI & ERIC J. MOREELS
Penciled by ELIOT R. BROWN
Cover by STAZ JOHNSON
Walk through Marvel's Earth with the first-ever official atlas! In the first half of this indispensable guide, travel through Europe, Asia and the Pacific with digestible in-depth features including: the splendor of Dr. Doom's Latveria! The wonders of Muir Island! The glory of Silver Sable's homeland Symkaria! The urban squalor of Madripoor! The underwater marvels of Lemuria! From the shores of Ireland to the ocean's very depths, it's all mapped out for you courtesy of handbook legend Eliot R. Brown (PUNISHER ARMORY, IRON MANUAL)!
64 PGS./Rated A …$3.99

This actually sounds really fun, and like something I’d definitely like to have on hand (I’d love a DC one, too). At $4, it seems like it’s a little higher than what I’d want to spend on a comic book with no actual comics in it, but then it is almost three times as many pages as your average $2.99 comic book. 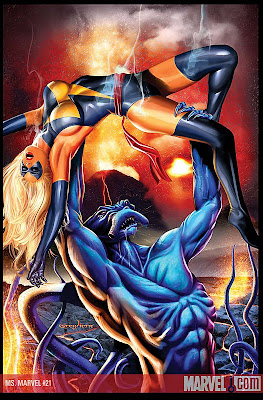 
MIGHTY AVENGERS #7
Written by BRIAN MICHAEL BENDIS
Penciled by MARK BAGLEY
Cover by FRANK CHO
The Ultimate Spider-Man super-team of Bendis and Bagley reunite and just in time for the Avengers’ biggest problem ever!!! A Venom virus hits the city of New York!! A Venom virus!! The entire city of New York turns symbiote. Plus, Wonder Man gets a much needed makeover. All this and Tony Stark gets himself a green-skinned present in a body bag.

I honestly don’t believe this has never happened before. Why didn’t this happen in 1997?! I just hope the Avengers—and copious Marvel hero guest-stars—get Venomized, complete with new black, Venom-style costumes.


NEW AVENGERS #36Written by BRIAN MICHAEL BENDIS. Pencils & Cover by LEINIL FRANCIS YU. Hey, I don't know if you read the solicitation for Mighty Avengers but a Venom virus has gone off in New York City. That means the whole city!! That means the New Avengers have turned symbiote. Oh yeah!! Plus, Wolverine has a bone to pick with Spider-Woman about a little green-skinned something. Oh, and the Hood isn't wasting any time setting himself up as the kingpin of all super-villains

Oh, okay, the New Avengers have turned symbiote. Awesome. I guess Warren Ellis was right when he said the guys at Marvel have their penises on the pulse of America. (He was still wrong to put that mental image in my head, though). 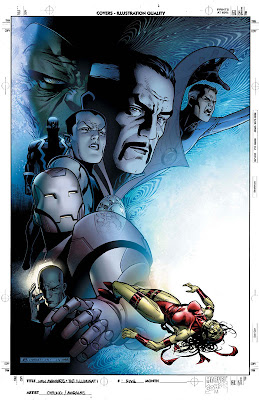 NEW AVENGERS: ILLUMINATI #5 (of 5) Written by BRIAN MICHAEL BENDIS & Brian Reed. Pencils & Cover by Jim Cheung. The Illuminati get together for the first time since Planet Hulk and the Civil War to deal with the shocking reveals in NEW and MIGHTY AVENGERS. But not everyone in the cabal is who they say they are. It’s a throw-down drag-out that opens the door to the Marvel event of 2008!! WHO DO YOU TRUST?? Do not miss this important chapter in the saga!!

“Not everyone in the cabal is who they say they are?” Could one of them be a Skrull? My money is on Dr. Strange, who has been totally out of character throughout the whole series. Well, him and Charles Xavier. And Tony Stark. And Reed Richards. And even Blackbolt a little in the last issue. Okay, they’re all Skrulls except Namor. Imperious Rex!

I love that cover. I like how it looks like Iron Man is putting his arm around the shoulder of a tiny little baby version of full-grown Charles Xavier and is like “Come one little guy, let’s get away from that nasty old Skurllektra corpse….” 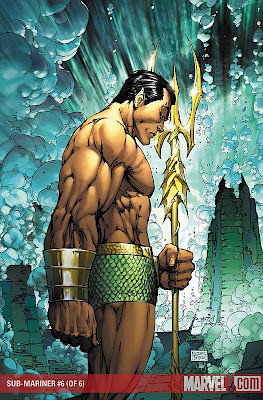 I... can't even make fun of that. It just makes fun of itself. 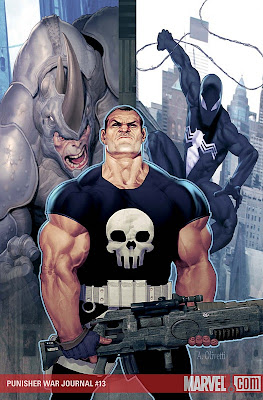 PUNISHER WAR JOURNAL #13 Written by MATT FRACTION. Pencils by CORY WALKER. Cover by ARIEL OLIVETTI. “HUNTER/HUNTED,” Part 1 of 3. The reintroduction of a classic, brutal, and bloodthirsty Kraven the Hunter. A bank robbery goes violently wrong, leaving the Rhino on the lam, running from the long arm of the law and, of course, the Punisher. As Frank Castle looks to settle the score with an old foe, the Hunter stalks the same prey, building himself the ultimate menagerie—a living, breathing super-human zoo! Add Spider-Man into this mix as the lone voice of sanity and super-special guest artist Cory Walker (THE IRREDEEMABLE ANT-MAN, Invincible) and you've got chocolate and peanut butter with bullets dipped in it. Delicious! Violent! Explodey!

I gave up on this title almost immediately, due to dissatisfaction with the Civil War tie-ins of the first few issues (which didn’t quite match up) and disappointment with the artwork, but this sounds like a neat idea for a story, and there’s a different artist involved.

Oh Frank, I knew I couldn’t say away from you for too long! 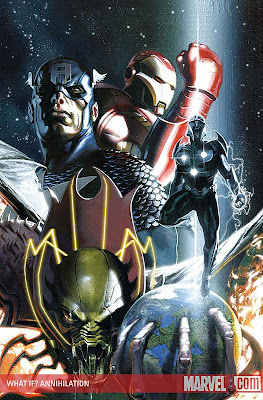 WHAT IF? ANNIHILATION Written by DAVID HINE. Penciled by. Cover by GABRIELLE DELL’OTTO. The wave of ANNIHILATION nearly ravaged the cosmos...but WHAT IF Annihilus was not defeated in the outskirts of our galaxy? WHAT IF he brought his devastating alien armada to Earth? At the height of CIVIL WAR and SILENT WAR, can our planet's mightiest heroes put aside their differences long enough to save all of humanity?

Early on, this was a popular messageboard theory for how the conflicts of Civil War would be resolved, so having it actually play out in a What If? special is a pretty savvy idea on Marvel’s part.


X-FACTOR #25 Written by PETER DAVID. Penciled by SCOT EATON_Cover by DAVID FINCH. Variant Cover by J. SCOTT CAMPBELL. MESSIAH COMPLEX – PART 3 of 13X-Factor Investigations joins the search for the missing mutant baby! Rictor infiltrates the Purifiers’ church in hopes of learning what they know about the kidnapping, but the secrets he uncovers surpass his wildest nightmares. Meanwhile, Madrox and Layla visit Forge and learn the terrible truth about the future of mutantkind.

Re the symbiote invasion comments, you were close: it actually happened in 1995.

Ah-ha. Were there Venom-ized Marvels in it?

It's a super tough call for me. I don't think Ms. Marvel's breasts are reacting to gravity quite right in that image. But man, Namor's arm is as thick as his torso in that Turner cover.