There's no shame in getting beat up by Superboy-Prime.

Okay, actually, there's a lot of shame in being beat up by Superboy-Prime. Not only is his name Superboy-Prime (like "Superboy," only lamer), but he's a punk kid, a whiny petulant teenager who would rather destroy the entire universe than accept the fact that he's gay and totally in love with Alexander Luthor. (It's the 21st century here, SB-P. Just come out already, people will accept you for who you really are. And if not, you can punch their heads clean off).

But when you consider Superboy-Prime's power-levels, well, then there's relatively little shame involved in getting beat up by him. In fact, if you pull through the encounter without being vaporized, beheaded, bisected and in full-possession of all your limbs, then the argument could be made that you've done better than most against the Snot of Steel.

It took two Supermen to beat him into unconcsiousness at the end of Infinite Crisis #7, after all, and one of them died doing it.

Still, J'onn could have had better showings in both of these fights, if only he would have manned up a bit.

J'onn first encountered Superboy-Prime in JLA #119, the last issue of "Crisis of Conscience" and a lead-in to Infinite Crisis. While J'onn encounters him there, we don't. We only see J'onn react to someone arriving by teleporter whom he thinks is Superman. Next thing we know, the Watchtower explodes and J'onn's missing, later to turn up in Alex and SB-P's little Anti-Monitor corpse tuning fork tower.

While we don't actually see the fight, it's clear who won it. I'm not going to fault J'onn for losing to Superboy-Prime so quickly here. He was a victim of Superdickery, plain and simple. The teleporter read Superman's DNA, and he turned around to welcome his pal Kal to the Watchtower and just as he was thinking, "Woah, Superman looks thin" he gets a face-full of Kryptonian heatvision.

Because of SB-P's speed, which exceeds even J'onn's super-speed, it's not hard to imagine the heat vision striking him before he even has a chance to become intangible, thus setting his cape and maybe even flesh aflame when he hasn't steeled himself to have to deal with his own personal, power-dampening phobia. Superboy-Prime owns Martian Manhunter in a surprise attack at the end of JLA #119. There really wasn't much of anything J'onn could have done differently to turn that fight around.

In their next one, however, it's J'onn's turn to strike while his foe is unawares, and he again gets owned.

This one takes place in Infinite Crisis #6. Nightwing and Superboy have arrived and thrown a wrench in Alex and SB-P's plans, and their prisoners are escaping. J'onn attacks: 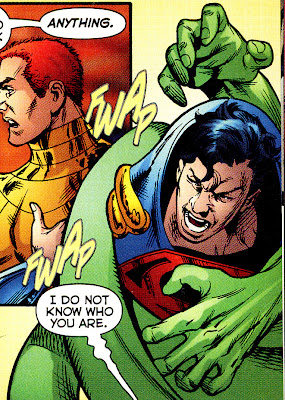 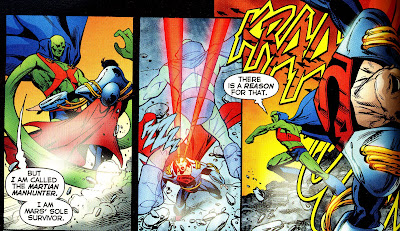 It's nice to see him using several of his powers in this fight, and even deliver a bad-ass little speech (even if it's not technically true; I mean, yeah, he's the last Martian, but it's not like it's because he personally beat up all the other ones or anything). Still, while he lasts longer against SB-P than Pantha, Wildebeest or Risk, he still gets taken out, as seen in a monitor within the Brother I satellite 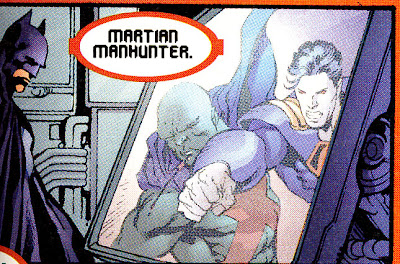 This time you can't fall back on the "I didn't know what hit me" excuse, J'onn. Phasing in and out wasn't a very smart strategy, given the fact that Superboy-Prime is so much faster than you. Whenever you're up against an opponent who can knock you--you--down and or out with his bare hands, you really gotta stay intangible and use your telepathic attacks. We all know, and you probably overheard more than enough whining to guess, that Superboy-Primes' not exactly the smartest or most stable guy with an S on his chest in the multiverse, and would presumably be even more vulnearable to a Martian mindfuck than others.

Still, this is Superboy-Prime we're talking about, perhaps the most powerful foe you've ever faced in hand-to-hand/power-to-power conflict. If you're going to get you ass handed to you in a fight, this is the fight you want to get your ass handed to you in. That way if Superman gives you crap about needing him to save you again, you can always just ask him how his Earth-2 counterpart is feeling after his fight with Superboy-Prime.

In fact, the only thing that makes your defeat here mildly embarassing is the fact that, a few pages later, the other, non-hyphenated Superboy totally shows you up: 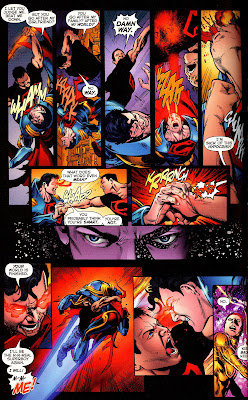 Come on, J'onn. That kids' just a pubescent half-clone of Superman; he's not even a full clone! He's only had his Superman powers a couple of months, and he lasted three times as long as you against SB-P!

J'onn never is allowed to play at full power.

He's been written way, way too strong for that.