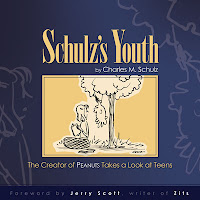 Why’d I wait?: Thanks to Fantagraphics ambitious Peanuts reprint program, I’m already spending an awful lot of money on Schulz cartoons a year now, and I have to draw the line somewhere.

Why now? Because you can read books from the library for free, and the local library I frequent just acquired this June publication.

Well?: I found this book to be something of a revelation, if not the source of an an out-and-out freak out. Because my previous experience with Charles Schulz’s work is restricted solely to his Peanuts strips and their various animated and advertising incarnations, which so closely followed his design and rendering style, to see Schulz drawing something—anything, really—other than Charlie Brown and company was…different. Even wrong. And I imagine that this will be true for a lot of readers too.

See, the world of Schulz’s Peanuts is such a particular, peculiar place, with such rigid rules enforced, that it’s unsettling, even somewhat scary to see those rules seemingly broken.

Schulz’s Youth collects his Young Pillars cartoons from The Church of God’s youth publication, Youth, which he created between the mid-fifties and mid-sixties. This is Schulz drawing teenagers and teenagers are, obviously, all over three feet tall, so I went in expecting things I’d never seen before. But it’s not just teens Schulz draws in Young Pillars. Oh no. Schulz draws their parents, pastors and sundry other adults too.

That’s right, Schulz drawing grown-ups. Feel free to join me in freaking out.

The weird thing about the sight of Schulz-drawn grown-ups, aside from the fact that they’re, you know, Schulz-drawn grown-ups, is just how natural and, well, Schulz-esque these grown-ups look. Clearly, if we ever saw Charlie and Sally Brown’s or Linus and Lucy van Pelt’s parents, they’d look just like this. And yet, we never did. The adults’ absence from Peanuts was a defining characteristic of the strip (and, to a lesser extent, the cartoons, which featured adults’ vocal presence—even if only as the wa-wa-wa-wah-ing, saxophoney sounds).

So, in a sense, this book reveals to us something we’ve never seen and which maybe we shouldn’t be seeing, and is thus pervaded by a feeling of wrong-ness.

(Almost as disturbing are the instance in which the teens have faces and hairstyles that look familiar from Peanuts; more than once I seemed to spot grown-up, teenaged bodies with the heads of Marcy, Lucy or Peppermint Patty atop of them).

These are also all one-panel gags, which Schulz apparently has some experience with, according to the supplementary material (there are also some illustrations and other old, non-Peanuts work included), but which are obviously quite alien to his best-known work. And yet, these one-panel cartoons still read like that work. Here, each panel is like the last panel of a Peanuts strip.

You know what else seems alien and wrong? Leveling anything other than effusive praise at Schulz, but I have to confess, most of these cartoons aren’t really all that funny. They’re religious, and not even Peanuts-religious (which, when it would strike a religious note, would be one that kept the general nature of the audience in mind, and would thus tend towards a vague Christian humanism instead of particular point-of-view that could easily be assigned to, say, a particular denomination or way of thinking).

The audience for these strips were obviously already ready fairly religious, so although there’s no real preaching or proseletyzing in them, they certainly take for granted the Christianity of the audience. This can make the topics for so many of the cartoons seem kind of obscure, and footnotes are needed to explain a couple of the jokes. (Even after 17 years of Catholic education, there were a few Bible references I didn’t get at all).

But more than the religiousness of the characters and the messages, it was the culture that seemed hard to relate to. Christian youth groups, youth picnics, teenagers working hard to be lead religious lives—it’s a culture that is so far out of my frame of reference that the gags rarely let me in, and I always seemed to be looking at them from no closer than arm’s length (And, like I said, I grew up in a series of religious schools).

With all that said, it’s still a rather pleasant read, and Schulz’s line work is just lovely here as it is in Peanuts (as freaky as it may be to see him drawing things other than the same characters and settings, it’s also kind of refreshing to see a great artist flex his skills on something new…new to us, anyway).

Honestly there were a couple of times I just stopped reading to trace characters’ heads with my index figure, just to see how Schulz have moved his pen over the paper to create these characters.

The teen characters who fill up the books—while adults appear, they do so only occasionally—are all long and lanky figures, almost giraffe-like in their proportions. It’s a wonderful evocation of that particular age, when kids have overnight growth spurts, their limbs grow gangly, and they seem to tower over the rest of the world.

These may not be Sculz’s best cartoons, but they’re beautifully drawn and, let’s face it, even the very worst work of a master is worth a look.

Would I travel back in time to buy it off the shelf?: No. As interesting as Schulz’s Youth is, it’s not really an essential read. Definitely something to borrow from the library or read in the book store though, and to consider adding to your own collection after Fantagraphics has finished publishing Peanuts.
Posted by Caleb at 7:54 PM

There was another collection of Schulz's pre-Peanuts work that came out a few years ago, called It's Only A Game, if I remember correctly. It was about baseball, I guess. I never read it, but I read a few similar reactions, in which people noted the weirdness of Schulz-drawn adult characters. It might be worth checking out, since I think it's more of a multi-panel strip (although I could be wrong about that), and it covers a subject that's not so narrow.

As the publisher of both Schulz's Youth and It's Only A Game, I can note that It's Only A Game is about a large range of sports and activities; baseball is just a small part of it (we just happened to pick a baseball panel for the cover.) And it is primarily single-panel material, not strips. But yes, it does have Schulz drawing adults. Schulz only did the finished work himself for the first few months of the strip, then switched to doing layouts for Jim Sasseville to finish.
And yes, it is worth checking out. Even if you feel these books aren't worth owning (and I'd certainly disagree, naturally, but I'm publishing this stuff because it's stuff I'd want to buy!), if your library doesn't carry it you can request that they get it in. That will encourage them to buy a copy, which would make me happy (although I'm also glad if you just read it.)

Matt, Nat replied more thoroughly and authoritatively than I could have.

There's a little bit of info about It's Only A Game in the back of Youth, and I definitely plan to check it out next. The art in just that single image looked intriguing...Schulz-y, but not (I guess on account of the collaboration...?)

I agree Youth's worth owning...if you can afford it. It's definitely on my ever growing Things To Add To My Hypothetical Library When I'm Well To Do list.

Actually, the image on that It's Only A Game listing in the back of Schulz's Youth comes from the early months of the feature and thus is completely Schulz.
The image on the cover shot of It's Only A Game, however, is an example of Sasseville finishing from Schulz layouts... actually selected by Sasseville himself for the cover, and approved by me because it was a good picture, and because the kids-and-baseball theme should seem familiar to fans of Schulz's more famous work.