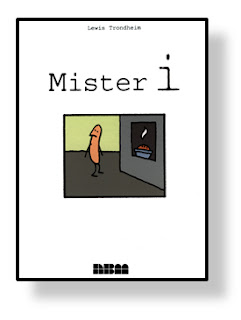 Mister i (NBM), by Lewis Trondheim

Why’d I wait?: I didn’t even know this book existed. According to the not 100% reliable (particularly where comics are concerned) Amazon.com, this book came out in January of this year, but I don’t remember seeing anything about it anywhere, nor do I recall seeing it on the shelves of my local comic book shop. So, clearly, NBM needs to do a better job of letting me know when they’ve got great books coming out. Or I need to do a better job of paying attention to what’s being released. Or maybe we can meet somewhere in the middle. Whatttaya say, NBM?

Why Now:? I saw it on the shelf at one of my local libraries, and recognized the name “Lewis Trondheim” on the spine as that guy who does all those great comics with Joan Sfar that First Second has been importing (though not fast enough for my liking; I’d like a new Dungeon gn once a week, if possible).

Well?: This is apparently a sequel of sorts to another Trondheim book published by NBM which I’ve never heard of, Mister O.

Mister O’s protagonist is a little pink “O” shape with stick figure arms and legs, two dots for eyes, and a line for a mouth. I’m assuming he’s named for his shape, just as Mister i is named for his. He looks kind of like a hotdog with two dots for eyes and the same stick figure arms and legs. “Mister Hotdog” doesn’t sound as good as “Mister i" though, nor does it fit with Mister O, so Mister i it is.

Trondheim, whose work you may now from Tiny Tyrant, A.L.I.E.E.E.N. and Lil’ Santa (in addition to the Dungeon books) has reduced his art style to about as minimal as it can get while still conveying enough information to let us know that this is a person, or that’s a tree, or that’s a bull, and so on.

Each page is a complete stand-alone story with a beginning, middle and satisfying end, a trick Trondheim accomplishes by dividing every single page into sixty panels. Yes, sixty.

The stories are all wordless, and all involve our hapless protagonist trying to acquire something to eat. His favorite seems to be a pie cooling on a windowsill, but he also tries picking apples and berries and garden produce, and fishing and hunting. His means of acquiring the food generally involves dastardly acts—stealing the pie, stealing candy form a baby—but crime never pays, and at the end of each story Mister i dies horribly (There’s quite a bit of blood, but it’s hardly gory, considering the abstract nature of the character doing the dying, and the world in which he dies). 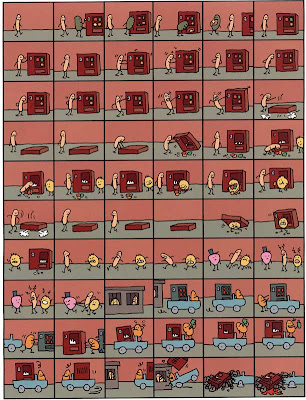 (Above: One of the stories from Trondheim’s Mister i. Click here to read it)

The slapstick is wildly inventive, and Trondheim indulges in some scatological humor that left me laughing with disbelief that he’d even attempt visual gags so gross. It adds up to a book that tells the same story over and over without ever feeling repetitive. Rarely has horrible violence been so hilarious, but beyond the pure entertainment value of the book, I found myself increasingly fascinated with how it was made.

Every story is exactly sixty panels long, meaning every single story, as different as they all are, has been so rigorously, mathematically planned out, and yet they feel completely effortless and capricious, with no signs of Trondheim stalling or delaying the action to make sure Mister i dies in panel 59 and his blood pools around his corpse in panel 60.

But not only is the book funny, brilliantly created comics, it also has an important message. And that message is: don’t steal pies left to cool on windowsills. Because you never know if the person who baked the pie will catch you in the act and force the still scalding hot pie, pan and all, into your mouth and down your throat, choking you to death while your mouth and throat swell and burn from the inside.

Would I Travel Back in Time to Buy it Off the Shelf?: Hmm, this is a tough one this time out. It’s priced at $13.95 for a book that’s only 32 pages long. But then, it’s a nice format, sized like a children’s picture book and featuring a hard cover. And 32 of these pages are certainly constitute a lot more reading time than, say, 32 pages of a super-comic or manga. Sure, I’ve already read it for free from the library, so the question becomes is this something I would have liked to have owned in January? Or is this something I’ll want to read again and again over the years?

I’m thinking it will reward re-readings. Particularly after a few months or years when I’ve forgotten the exact happenings of each story.

So I suppose if time travel were possible, but only to purchase books new that I missed the first time around, I might go back and pick this up eight months ago, depending on how sound my finances were that week.

Since time travel’s not possible, I think I’ll simply add this to my “To Buy When I’m Rich or Reasonably Well Off Enough to Blow $14 on a Book I've Alread Read” list.
Posted by Caleb at 12:59 PM