I've been writing a lot of pretty nice things about Kurt Busiek lately. Not only is he currently writing Superman, but thanks to the M.I.A. Action Comics creative team, he's pretty much writing that title too. The result? The Super-books are currently better-written then they've been in...well, at least since I've been reading comic books.

Busiek's comics career is long and storied, and he's done a lot of great comics (and, yeah, a couple of not-so-great ones too). Recently he attempted to do the impossible and successfully relaunch Aquaman without the book's title character, with some pretty mixed results (which is a win, considering the doomed nature of such an endeavor). And, before that, he made Conan totally awesome again.

His signature work, Astro City deserves all the accolades it's racked up over the years, and belongs on the bookshelves of anyone who loves superheroes.

Teamed with George Perez, he penned the superlative JLA/Avengers and had a stellar run on The Avengers (probably my favorite Avengers run, for what that's worth).

His Marvels collaboration with Alex Ross is one of the most essential Marvel Universe comics ever published, and his Superman: Secret Identity is mandatory reading for any and all DC super-fans.

With that much good stuff on his resume, it might seem like it would be difficult to select a single work and confidently hold it above all the others and say, "This, this is the single greatest acheivement of Kurt Busiek! This is his masterwork! This is the very best work of a very good writer!"

It might seem like it would be difficult to do that, but it's really not. That's because one of Busiek's works is so far superior to all of his others that it's on a whole other plane. Marvels and Astro City wish they were a tenth of the comic book that this series was.

And what book is this that represents the zenith of a modern master of super-scripts? 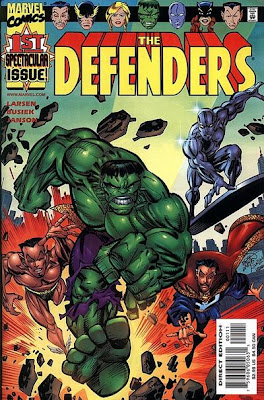 Yes, 2001's The Defenders, which Busiek co-wrote with penciler Erik Larsen. The greatest comic book ever published by human beings, Busiek and Larsen's Defenders immediately surpassed the works of all of Marvel's classic creative teams, even the Stan Lee/Jack Kirby and Lee/Ditko teams, and would ascend to a level of quality that no Marvel book since has been able to touch. The very best issues of New X-Men or Garth Ennis' Punisher comics or Ultimate Spider-Man were almost as good as the lesser issues of The Defenders (the ones featuring guest-artists instead of Larsen and his inker Klaus Janson), but they couldn't possibly compare to even the mediocre issues of Defenders.

Larsen's brilliant badness featured a primitive, primal energy that only Kirby could have hoped to achieve, only with a rough terrible-ness that Kirby couldn't have achieved no matter how fast he drew or how many corners he cut. Larsen's pencil art was a mixture of awful superhero art and great cartooning, creating a style completely unknown to Marvel readers.

Larsen and Busiek were able to find an ingenious way to reunite the original anti-team into a cohesive unit that could team up every single month, while keeping their reluctance to do so completely intact, even slowly ratcheting that reluctance up issue by issue. They also managed to distill the characters into their most iconic, mythic essences.

Together they faced Red Raven and the Bi-Beast, an alliance of all of Marvel's stupidest underwater villains, the fearsome Orrgo and MODOK and his team of Headmen, and remember, this was back before the Internet told you how cool MODOK was.

The series only lasted 12 issues, ending in a completely silent "'Nuff Said" special issue that ranks up their with "The Anatomy Lesson" as one of the best and most influential single issue comics stories in history. But that was simply because it was caviar for the masses. It would take fans a few years to realize that what they had failed to buy in droves was actually the greatest thing they could ever have the chance to read in their entire lives.

Here then, are the greatest five panels in Kurt Busiek's career: 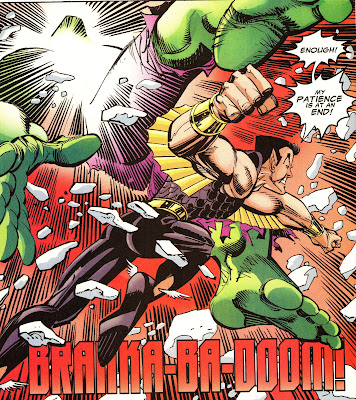 Somehow you just knew that was going to happen. Namor has only himself to blame.

Crap! Now I have to hunt for that series in the bargain bins! I don't suppose it was collected as a trade...

Erik's facial expressions on Hulk and Namor totally sold it too! Awesome.