We'll be right back after these messages...

As the more observant among you have no doubt noticed, I've been reading a lot of "Satellite Era" Justice League comics of late (which is why every other post contains a panel written by Gerry Conway).

The ads in these are pretty interesting because of what they reveal about the audience—or at least the intended audience—of Justice League comics at the time.

There are a lot of ads for DC's other comics, which seemed to be heavy into fantasy stuff at the time(Warlord, Arion, Arak, Camelot 3000, Amethyst, Princess of Gem World), and for subscriptions to DC comics.

There are a lot of ads for videogames, which hasn't changed at all (well, the graphics in the games sure have, but the presence of videogame ads in comics hasn't), and a lot of games for role-playing games, something I've seen progressively less and less for over the years (the last round I've seen in comics were those advocating playing D&D with a group of friends in person instead of role-playing online, a whole ad campaign seemingly in reaction to the slow decline of role-playing games that aren't video games of some sort).

I haven't seen a single ad for a film so far, which strikes me as odd, as when I started reading comics in the '90s, film ads were a constant presence.

I've also seen a lot of ads for toys, candy and gum, which makes me think that as late as the early '80s, kids were still the major audience for comics.

There were scads of those awesome Hostess ads, though they seem to be petering out now that I'm in 1982 (Aside: I would totally buy a graphic novel featuring all of DC's different Hostess ads, perhaps with some creator commentary).

Oh, and then I saw this ad: 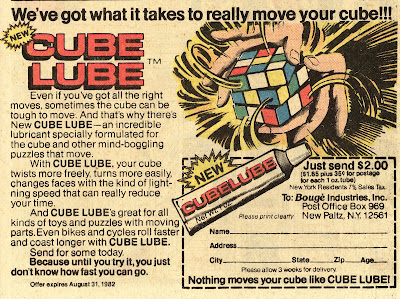 Which may just be my favorite comic book ad ever.

Now, I was only five years old at the time that this ad was set to expire, so maybe this is a silly question, but were Rubik's Cubes really that popular that they created a market for ancillary products? Ancillary products like special lubricant for them? And were un-lubed cubes a major problem back in 1982? Did people end up wasting lots of time solving the cubes simply because they were locking up and hard to turn due to lack of proper lubricant?

And did I really just scan and post this image because I think "lube" is inherently a funny word?

Labels: evidence that I am actually a grade-school child

I can't say anything to the popularity of Rubiks Cubes in 1982, as I was only three at the time, but I do remember that my older siblings' had at least one, and by the time it was passed down to me all the stickers were peeling off after years of being removed and repositioned--no doubt because we didn't have any Cube Lube.

Which, by the way, the adolescent in me finds to be a very funny word.

I was pretty young in 1982, so I don't know about the popularity either. However, I do have a Rubik's Cube now, and sometimes it is a pain to move it. If I had the lube (heh, heh) to loosen it up I would definitely use it. I actually thought I did something to screw my cube up, apparently it was a problem 25 years ago, and it's still a problem today.

My grandma had a Rubiks cube at her house, but it worked just fine.

The trick is that one of the corners pops out, and then you can take the individual blocks off an rearrange them that way. No lube required.

Rubik's Cube had its own freakin' cartoon in the early 80s. Based on that alone, I assume its popularity must've been reasonably high at the time.

I kinda regret posting this when I did, as a few days later I saw an ad for the Rubik's Cube cartoon show. Holy crap did that look freaky! A Rubik's Cube, with a face...and feet? Gah!