Another Friday night, another round of comic book character fisticuffs in the blogosphere! 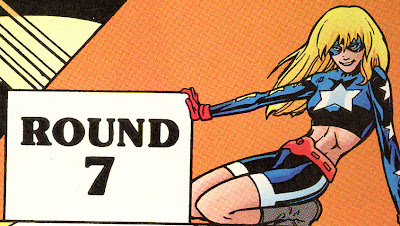 Tonight's round of Friday Night Fights features the baddest badass in two fictional supehero universes, Batman! His opponent is-wait, scratch that. His opponents are the entire roll call of the most popular superhero team of all-time, The X-Men!

Don't get too excited, though, it's a pretty lame line-up of X-Men that take Batman on. Wolverine's not even there, and the mutants who do show up do so wearing their costume's from the cartoon. (I don't know why the world fears them, but I'm pretty sure it hates them because of their clothes).

It all went down in 1996 DC/Marvel: All Access #3, the penultimate chapter in the miniseries that dared to find the characters with the least chemistry in both companies catalogues and set them up against the least threatening threats imaginable: Superman vs. Venom, with an assist from Spidey! Jubille and Robin vs. Two-Face! Batman vs. The Scorpion! Batman and Dr. Strange...talking!)

Things get theoretically more exciting at the midway point of this issue, when Batman and Access want to take Dr. Strange back to their universe to interrogate him or something, and the X-Men show up because well, Marvel figured that might be more intersting than Batman vs. Wong, I guess.

Let's see how the Dark Knight fares in a battle royale against the Merry Mutants. (As always, just click on the images to better savor the delicious '90s details on the costumes). 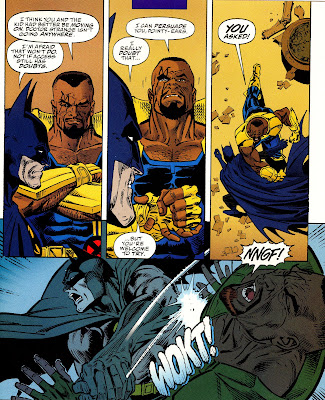 Yow, right in the goatee! 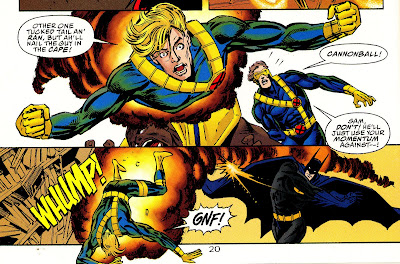 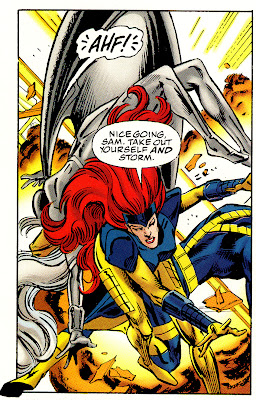 (Although I think Jean technically took herself out of the fight, deciding the best use of her time is to berate Sam while he's still in mid-explosion rather than use any of her awesome mental powers against Batman). 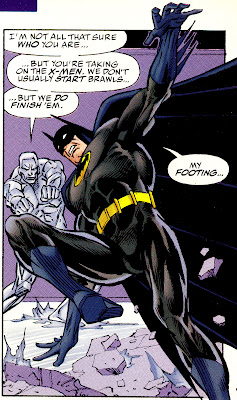 Oh, Batman. Taken out by Iceman? Like you've never fought anyone who can freeze the floor before?

Bahlactus will be so disappointed in you. 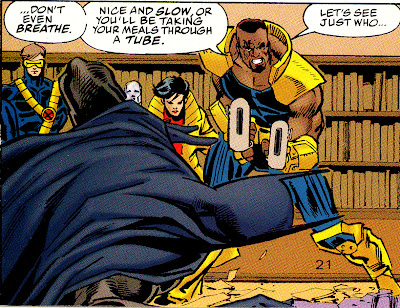 1.) Why does Bishop carry guns? His mutant power, as I understand it from the panel in All Access #4 in which he explains it to Kyle Rayner while fighting him, is to absorb energy and redirect it as laser beams. So, essentially, he is a living laser gun already, right? So, why does he carry two big mutant-from-the-future style guns? (Not trying to be a smart-ass here, I'm actually curious). Isn't that a little like Superman having twin head-mounted flamethrowers? 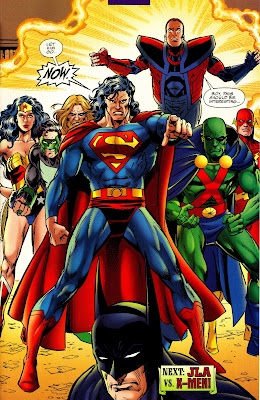 2.) Has anyone ever been more wrong about anything than Access was in this panel, when he said the ensuing JLA vs. X-Men fight would be interesting? Or do we let him off the hook for saying it should be instead of saying that it would be?
Posted by Caleb at 2:25 PM

I remember reading this when it came out. Batman takes out the X-Men by himself, but the JLA only fight to a standstill. Have J'onn and Jean remove the telepathy from the fight, then any one of the JLA should be able to take out these guys.

My thought is that Bishop carries guns because, well, what if he doesn't have any power stored? Not that he'd turn the guns on himself, although that would make a bit of sense.

But more likely, it's due to his training as a police officer in the future. Don't remember the details, but mutants didn't use their powers a whole lot then, so it's probably second nature to him to use guns instead of his power.

Never thought I'd be defending Bishop . . .

Why does Bishop use guns?

I think that he once explained that he channels his power through the guns, but that still makes the guns redundant, since he can project energy without them.

Like the series that spawned All-Access, heroes abilities to beat other heroes is based on their popularity, NOT their actual abilities. The JLA and X-Men were about as popular at the time. However, Batman was more popular than the X-Men (perhaps by a narrow margin).

That is the only phenomenon at work in DC vs. Marvel that allowed Wolverine to beat Lobo, or Storm to beat Wonder Woman.

I've seen one panel of this series' Venom vs. Superman where Venom takes one on the jaw, rambles something about taking on the Juggernaut, and punches Superman through something. If Venom was ever interesting, that decade ruined him. I didn't read the fight with the Juggernaut but if '90s-Venom could really hold his own while just slugging it out it's even more depressing than this.

The very next panel after "this should be interesting" ought to be everyone in the JLA in the exact same poses, with all the X-men knocked out, and Batman saying "Good job, Flash, J'onn."

universaladdress, I can't recall very well, as those early 90s VENOM miniseries were dreadfully bad, but I think I read the Venom vs. Juggernaut battle, and I recall (hazily) that Venom got his ass kicked pretty badly in the actual fight. Then he got dumped in waste and the symbiote went insane. Or something.

But thank you for bringing back memories of the worst comic book purchase I ever made.