Dream Trades: The Complete Super Powers by Jack Kirby and Others 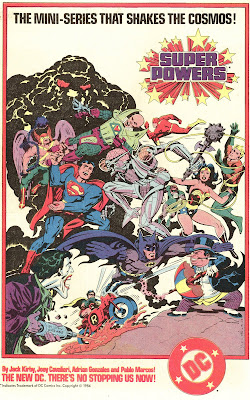 (Click the above image to enlarge, and freak out about how cool Kirby's Penguin is)

DC produced three miniseries based on the Super Powers TV show and toy line, one a year between ‘84 and ’86. The creative teams involved might have just been happy to get some relatively high-profile work at the time, but looking back from 2007, it’s pretty remarkable just who it is that DC had making these things.

The first two series heavily involved one Jack Kirby. The five-part 1984 series, which the above house ad advertises, featured covers and a plot by Kirby, with Joey Cavlieri scripting, Adrian Gonazles penciling and a handful of inkers finishing the art. The six-part 1985 series featured covers and interior pencils by Kirby, though this time around Paul Kupperberg apparently plotted, in addition to scripting.

Take a look at the covers: 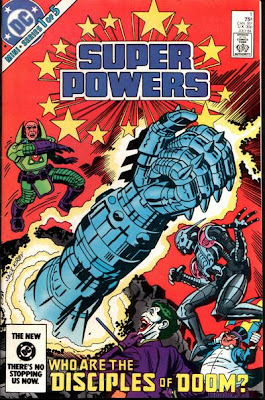 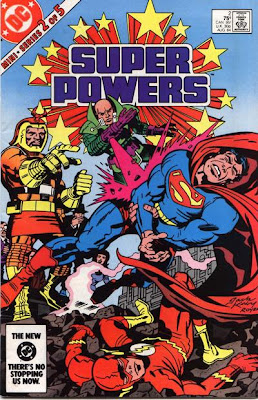 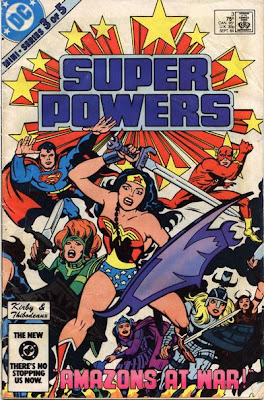 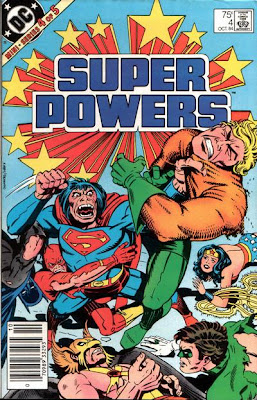 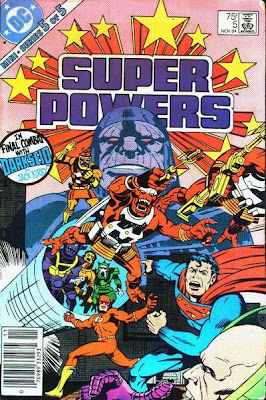 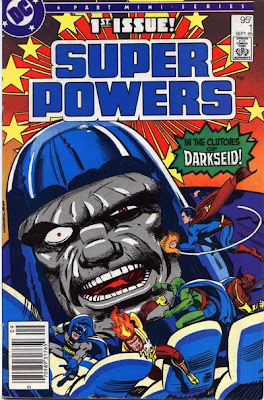 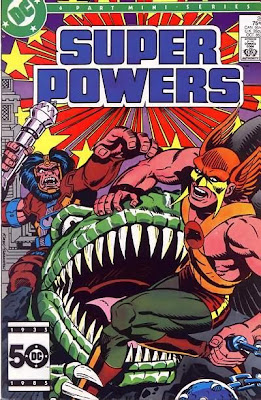 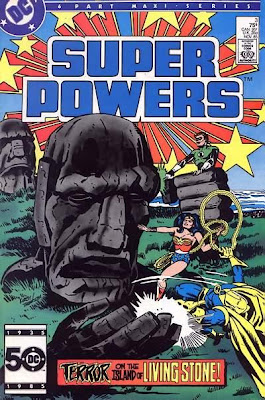 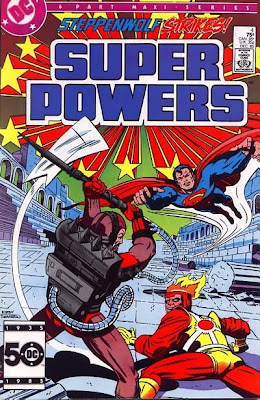 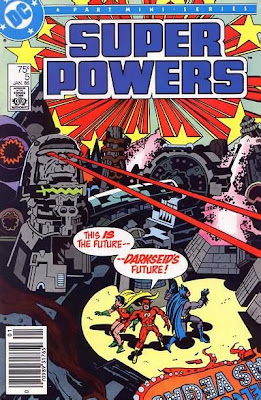 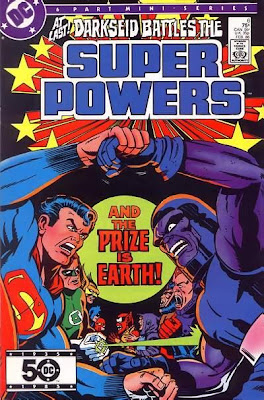 The four-part 1986 series is Kirby-less (aside from involving characters he created), although the penciler wasn’t exactly a slouch. This series was drawn by Carmine freaking Infantino.

Here are his covers: 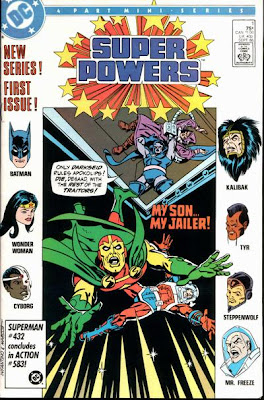 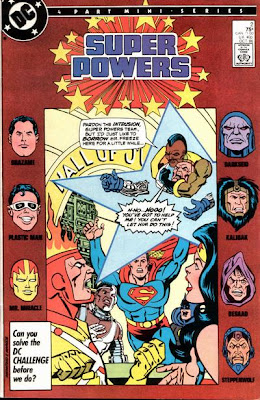 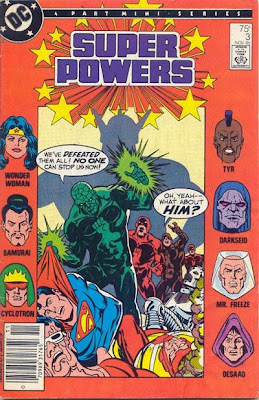 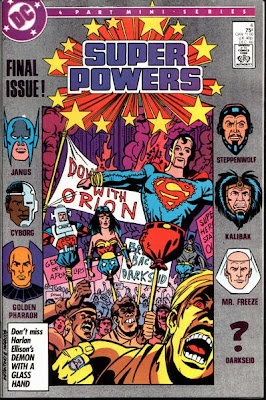 Now, I've never read a single issue of these stories. So they may be horribly written and illustrated; after all, comics giants involved with comics based on toys didn’t always do their best work (Check out Rachelle’s discovery of Ditko drawn Go-Bots comics). But based on that ad and those covers, I’m inclined to think Kirby at least did a hell of a job, even if it wasn’t the best work of his career.

It’s weird to see that patented Kirby energy applied to DC icons, isn't it>. Sure, we’ve all seen the Kirby Superman before, but the Kirby Batman? Aquaman? Robin? Wonder Woman? Flash? These are the first time I’ve seen any of them. And I love his Brainiac, Penguin and Joker in that house ad.

Collecting these series—even the Kirby-less third one, just for completeness’ sake—seems like a sales slam-dunk to me, for several reasons.

First and foremost, it’s Jack freaking Kirby. As recent shipping lists bear out, there’s as much interest in Kirby’s work right now as there’s ever been before. It’s not just DC’s new, complete Fourth World omnibus collection. It’s everything. The exact same week that Marvel put out a Devil Dinosaur collection, Image published a Silver Star one. It’s really only a matter of time before everything Kirby’s ever done gets trade-collected, and the iron seems to be particularly hot at the moment, DC, so go ahead, strike already!

A Super Powers collection need not be a big omnibus or absolute style thing. Hell, a nice cheap, black and white collection, even a slightly slimmer than the norm Showcase Presents collection (Including all three series, Super Powers only hits 330 pages...although to make it closer to 500, DC could always see about adding these into a Showcase Presents collection), would be welcome, and perhaps serve the art better anyway (I really liked seeing Kirby’s art in black and white in the previous Fourth World-related trades).

And while these stories might not count as official Fourth World or DCU continuity, it’s still Kirby himself doing Darkseid and New Gods characters, while at the same time drawing just about every single major DC character.

Secondly, these comics are based on a toy line from the early ‘80s. And really, that’s all you need to publish a comic book these days. While they haven’t all done gangbusters, we’re currently descending a wave of comics-based-on-toys-from-the-‘80s. Everything I played with as a little boy except Super Powers toys—G.I. Joe, Transformers, He-Man, Thundercats—have had comic books based on them in the last few years. Some were more successful than others, but there’s obviously a pretty huge market interested in this sort of thing, and certainly the Transformers movie and accompanying marketing tsunami demonstrates the size and passion of that market.

So come on DC, make my dream trade come true.
Posted by Caleb at 6:46 PM

I imagine these series would have been pretty cool at the time, too, since the Justice League in 84 to 86 was Vibe and Friends.

Curiously, do you feel like you're missing out on something with the black-and-white Showcases? It seems part of the visual appeal of superheroes is the colorful costumes. I suppose you could color them yourself, like I did with my b&w TMNT movie adaptation when I was ten. Now there's something DC hasn't thought of--marketing the Showcase editions as coloring books!

That second miniseries -- at least the last half of it -- looks like version 1 of Morrison's take on Darkseid and the New Gods in JLA: ROCK OF AGES, doesn't it? Wow.

Also, Boomerang! (Cartoon Network's outlet for older cartoons) shows SUPERFRIENDS at midnight, and they kind of mix up the batch of SUPERFRIENDS episodes they show. About once a month, it seems, they hit a run of the SUPER POWERS ones from the 80s, which is pretty much the idea of these books -- the "JLA" versus Darkseid and/or Brainiac and/or Lex Luthor. They're... not great? But it's at least interesting to see how they treated the concepts for TV the first time around, before Bruce Timm and Dwayne McDuffie got hold of them.

I haven't re-read the series in years, but when i was 10, I read these series until the covers came off. Great fun, I'd definitely read these in a Showcase format.

What must I do to make this happen?

I used to have a complete run of these miniseries, for which I think I paid 10 cents a copy. Honestly, they really aren't very good. Kirby's art doesn't hold up to his earlier standards, and the storylines are extraordinarily weak.

Hey, I just hit the Vibe and Friends portion of a huge stack of JLoA's I recently acquired! Nah, I don't really mind the black and white reprints. If the choice is bad coloring, re-coloring at a higher cost, or black and white for cheap, I don't really mind. In a lot of case, I enjoy the art more that way (Particularly with a lot of what DC's reprinted, like the old war comics and House of Mystery

I'm currently cable-less, but I used to watch their SuperFriends and it was really weird how you'd get, like, seven unbearable episodes of the SuperFriends in a row, then a random Super Powers (which was, like, a thousand times better) and then back into SuperFriends.

Yes. Yes. Eh (but I be there's a market for it!). Yes. The trade I most want right now is a Suicide Squad in Showcase format, and it looks like we're getting one. After that, definite All-Star Squadron, which I have a really hard time finding in back issue bins.

I don't know, but if you figure it out, for the love of God--do it!

You don't still have 'em do you? Cause I'd totally buy 'em off you for 11-cents a piece.

I'm afraid those comics are long gone. If I still had every comic I'd ever gotten from the bargain bins and Goodwill bins, my apartment wouldn't have room for people.

Ah, I got the first series out of the quarter boxes a while ago, and had them sitting around to try and wring a post out of 'em. They weren't great.

The first issue of the third series is in my box of New Gods stuff, and I kind of liked it. For some reason, I want to say they had an interview-style piece with Orion. Or maybe Miracle.