Seven Things I Learned From Justice League of America #183-185

A while back a friend gave me some old late-'70s issues of Justice League of America, from the so-called "Satellite Era" of League history, an era which Crisis on Infinite Earths knocked large chunks of out of continuity, which DC has precious few stories from available in trade form, and which current JLoA writer Brad Metlzer and current Action Comics/Green Lantern/JSoA writer Geoff Johns seem to have particular affection for.

I started using them as raw material for EDILW feature "Satellite Era Spotlights", of which there will likely be no end, as a few weeks ago I acquired a big box full of JLoAs stretching from #180 to #247 or so, with some holes here and there (Did the Secret Society of Super-Villains kill the Justice League and Justice Society? I'm missing the end of that arc!). 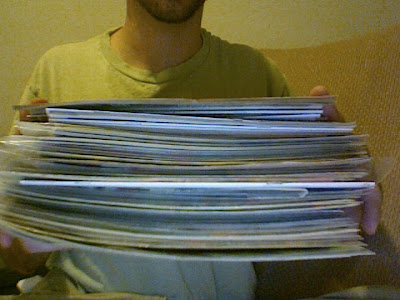 Anyway, up until recently, all I've been getting out of these comics is an idea that Hostess snack cakes are probably the greatest achievement of human history, that Len Wein has a new Swamp Thing comic coming out featuring our favorite "muck-encrusted mockery of a man" and that there's no stopping the new DC now.

And then I got to 1980's Justice League of America #183-185 by Gerry Conway, Dick Dillin, George Perez and Frank McLaughlin, the annual team-up between a couple Justice Leaguers and a couple Justice Socialites. As was often the case, a third group was involved with this story, and this time it was the New Gods.

This story proved quite educational, particularly compared to some of the previous stories I'd read, and I learned a lot while reading it.

And, as is my habit, I will now proceed to share those lessons with you dear readers. 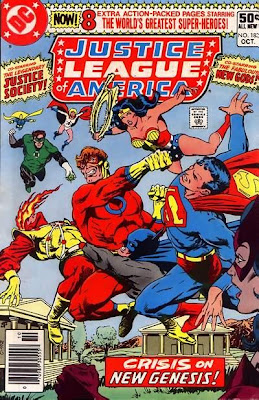 1.) Orion went through more than one phase where he wore a really stupid looking costume. Yes, that's Orion in the middle there with the big "O" on his chest. The O is, presumably, for Orion. 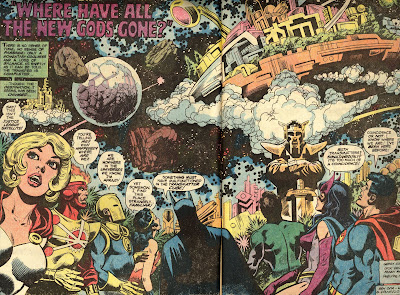 2.) New Genesis used to be presented as a truly awesome place. And by "awesome" I mean really awesome, as in "inspiring awe"-awesome and not, you know, the other kind of awesome that is more frequently talked about here. I guess 1980 was still early enough in Jack Kirby's DC mythology's existence that every superhero hadn't visited the home of the New Gods three to eight times, and Darkseid had yet to appear in every single comic book.

So rather than being just another well-trod DC space setting like Rann or Mars, New Genesis was still being presented as a fantastic place that could cause even superheroes to gasp. This double-page spread by Dillin and McLaughlin goes a long way towards conveying the nature of the place, but Conway's scripting helps immensely too.

Superman talks wistfully to Power Girl (while standing creepily close to her the whole time, talking directly into her lips) about the temptation to stay there instead of returning home, since he feels like one of many supermen on New Genesis.

Later, Conway tells us this about the size of the place: "Distances are almost impossible to measure on a world where cities average a thousand miles wide, and where the Earth would barely dispace the waters of a small lake"

3.) Earth-2 Wonder Woman is...Christian? Or Jewish. Or possibly Muslim. Or a Deist? But since this panel appears in an American comic book created by Americans in New York City for mass consumption by America's youth in the year 1980, I'm going to assume she's meant to be espousing a crypto-Christian belief. Or maybe a Jewish one. And how weird is that?

She doesn't deny the existence of her own gods, who she should be pretty darn sure exist (seeing as how they she's hung out with and fought so many of them), but she does say there's only one "true 'God,'" which would imply that all of her gods are false ones, wouldn't it?

I wonder, does this mean Diana's gods also believe in the existence of "He who is the only true 'God'-- whose nature remains unknown," and do they worship him too? Did the gods of ancient Greece convert to Christianity (or Judaism or Islam or possibly Deism)? Are they agnostic? 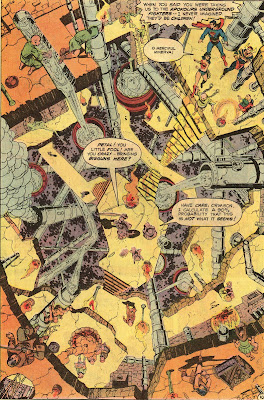 4.) Even as far back as 1980, George Perez totally ruled. Click to marvel at the majesty of a Perez-drawn splash page revealing one of Granny Goodness' orphanages. 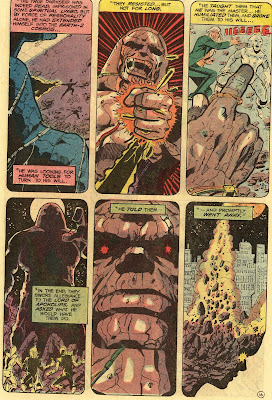 5.) Darkseid used to be totally bad-ass. Like the planet he lives on and the planet he's always trying to conquer, Darkseid has been greatly diminished by over-exposure in the DCU over the last few decades.

But in 1980, he was still a god. In this scene, we're told that even though Orion has killed Darkseid, the force of the evil god's will is so powerful that it reaches into another world, bends the earth to serve him. That's a city street transformed into a giant Darkseid simulacrum up there, being used toterrorize a trio of Earth-2 villains into raising him from the dead. 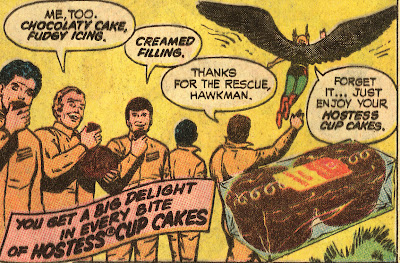 6.) Hawkman doesn't care about Hostess cupcakes. Hawkman's flying around one day when he notices a skydiver whose chute fails to open, right?

So Katar swoops in and saves the day, but all this lunatic cares about is his cupcakes.

"Hawkman, you've saved me," he observes, opening a bag to show off a couple packages of Hostess cupcakes (Wait, is that why his chute didn't open? Because he didn't pack it? He filled his bag instead with cupcakes?!) "And the Hostess Cup Cakes. And I'm ready for some right now."

The guy's pals are already chowing down and Hakwman's already on his way before the ingrate gets around to thanking Hawkman for saving his sad, pitiful, cupcake-centric life.

And Hawkman doesn't give a shit. He doesn't stick around to see if anyone wants to give him one of their cupcakes, he just flies away, pronouncing "Hostess Cup Cakes" in a way that looks pretty sarcastic to me. 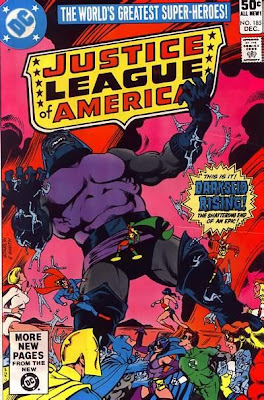 7.) While he may prefer navy blue, Darkseid looks pretty good in purple too.

*Aw, who am I kidding? I'll buy the trades as fast as you put 'em out, DC. I've just gotta know if they beat the Ultra-Humanite's Secret Society or not...
Posted by Caleb at 4:29 PM

Damn, that bit where Darkseid is coming up out of the street is awesome. And so is that Perez splash page. And the double-page spread of New Genesis is pretty nice too. Not Kirby, but actually a pretty good approximation of his style. If only the dialogue could match up. God, some of that is terrible, like Power Girl saying, "Hey! This isn't the Justice League satellite!"

I had that issue with the terrible Orion costume on it. :) I used to pick up a bunch of JLA issues in back issue bins, too. Maybe I should start doing that.