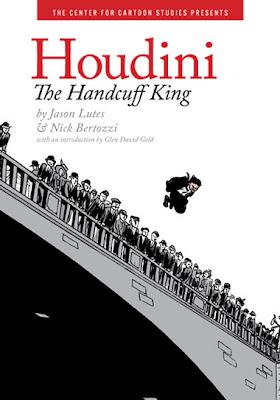 What an incredible book this is. Writer Jason Lutes (Berlin, Jar of Fools ) and artist Nick Bertozzi (The Salon) tell the life story of Houdini, and they do it in just under 100 pages, spanning only a day or two in the life of history's most famous magician.

It's this economy of the story which I find most remarkable.

It goes without saying that the life and work of Houdini is a pretty big subject to tackle in any medium, and with any amount of space. I can't even imagine how many hundreds of pages of prose have been written on the subject at this point. Houdini as the first celebrity, Houdini as the first superhero. Houdini as escape artist. As magician. As showman. As spiritualist. As fraud buster. As symbol of freedom. There's his complicated relationship with his own fame, with his many rivals, with the press, with his wife. There was that one time he teamed up with Batman.

There's a lot of ground to cover—where to begin?

Lutes and Bertozzi begin the day before a particular stunt of Houdini's. He's about to plunge into the cold Boston River, his wrists handcuffed behind his back and chains placed around his ankles by the Boston police, who will thoroughly search him for lock picks before he dives in. We watch a little of his preparation, meet his wife, see him interviewed by the press, and then witness the stunt for ourselves, from both Houdini's point of view and that of the crowd. Along the way, Lutes and Bertozzi manage to unfold a great deal of Houdinin's life story subtly, naturally and elegantly. It's a suprisingly full and thorough portrait of the man, given how much space is allotted and how little time is actually covered.

And it's surprisingly suspenseful. I mean, I know exactly how and when Houdini died, as does, I imagine, pretty much everyone. And yet near the climax of the book, when his wife is trying desperately to get through the crowd to slip her husband a lockpick he needs to survive the plunge, and encountering constant obstacles, there's a palpable tension, and I found myself slowly edging to the seat of my chair, in spite of my knowledge that this will surely end happily.

This is the page where I began to notice how well put-together the book was: 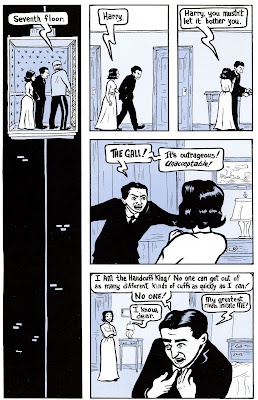 It's a pretty simple thing, building the page lay-out around the elevator shaft, but it sure is a neat one, as the elevator is like a panel itself, traveling up the page, and the characters in it seem to have gotten on at the bottom of the preceding page, only to ride up to the beginning of the next page, the readers' eyes along for the ride.

It's followed by pages of Houdini and his wife in their room together, him venting about his rivals and the press, she ultimately soothing him as they prep for the stunt together. And then we get this brilliant sequence, in which Houdini leaves the room and hotel, his mood as reversed as the direction of the elevator ride: 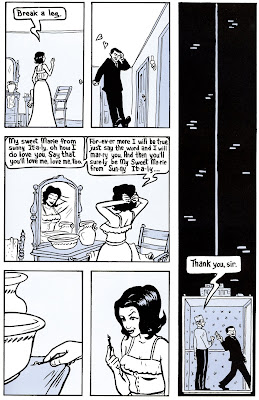 Together, the two rides form natural borders to the entire room sequence, book-ending it from the rest of the story, like a set of parantheses made out of the same material as the story itself.

Lutes and Bertozzi use a similar tactic, the subject occupying black space in vertical panels on the borders of the pages, during Houdini's plunge, his slow sinking and eventual ascent from the river (there's a brief sample below). It's great stuff, and Bertozzi communicates so much information in every panel; there is literally no space wasted in this story.

Take, for example, this page here, in which we see Houdini's wife looking calm as can be, so confident that her husband will survive, while the rest of the crowd, including one of her husband's employees (the big sweaty guy next to her) are mostly starting to freak out: 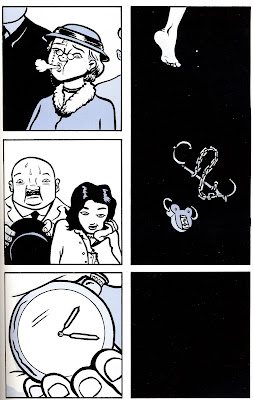 This book is like a how-to book of comic storytelling, and that's on top of being a fun, funny, thrilling character study of one of history's most fascinating characters. 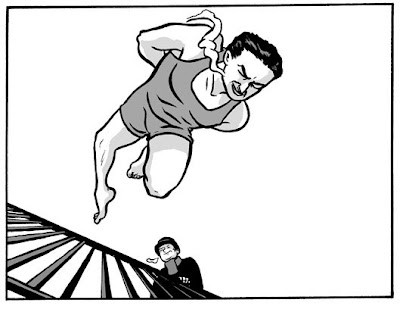 Agreed. Really, really strong book, and practically a textbook of "how to tell a story in comics".

Great review — those panels are beautiful, and I really enjoyed Jar of Fools. I think I'll be digging this one up.