These are not graphic novels: Patrick McDonnell's children's books

Since today is a Wednesday without comic books, it seems like a good day to blog about something other than comics—in this case a couple of children books which are written and drawn by a cartoonist.

Patrick McDonnell is probably best known for his daily striip Mutts, a domestic comedy about a couple of pets, including dog Earl and cat Mooch.

It's been a while since I've spent any serious quality time with a Mutts collection, but I remember it well enough that I'm confident in saying that in just about any funnies page which it appears, it's probably one of (if not the) best strips there. McDonnell is, simply put, a hell of a cartoonist, one who gets an unbelievable amount of information and emotion out of the very few lines he puts down per panel.

He's created four children's books so far, and I wouldn't be surprised if he continues to make more, based on the quality of the work and the reception they've received. Tonight, we'll take a look at two of them. 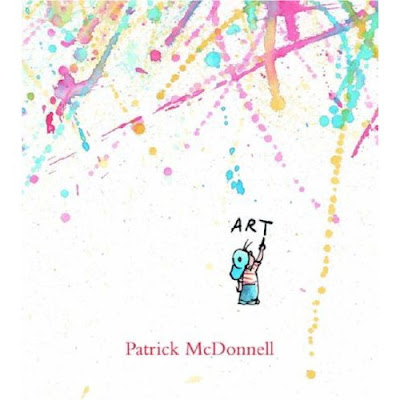 This is a very, very slight book, one that could easily have been reduced to the size of, say, a one page comic strip, but then, it is a children's picture book. It's about art, with both a capital A and a lower-case one.

Here are the first two pages, for a clearer idea of what I mean: 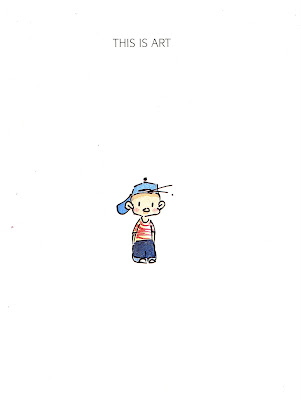 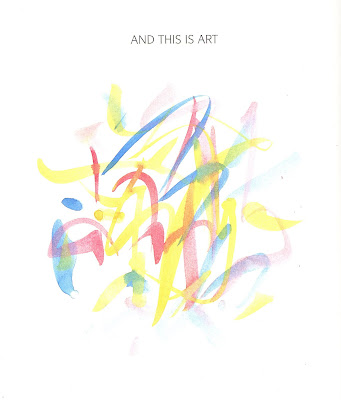 That's followed by one mixing the two images, captioned "Art and his art." See, Art is an artist.

After that set-up, the book is dominated by images of Art running around the big, open, white spaces of the squarish-pages, usually featuring a single image and phrase per page, drawing, painting and coloring. These pages are visually interesting, but don't really contain much information or story, beyond showing Art drawing.

The drawings are quite nice though. Here's a detail of one page, in which Art draws a dog: 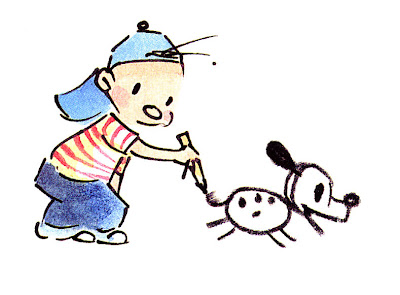 If you've ever tried it, you know there's nothing harder than drawing something that looks like a little kid drew it. I really like McDonnell's attempt here. It's clearly his art, and yet it's made primitive enough to seem like the work of, say, a young McDonnell.

Anyway, the bulk of the book is just McDonnell messing around, spending time on Art messing around, but here's the Awww-inducing punchline, which I'm about to spoil here. Art's mother puts his work up on the refrigerator door. Why? 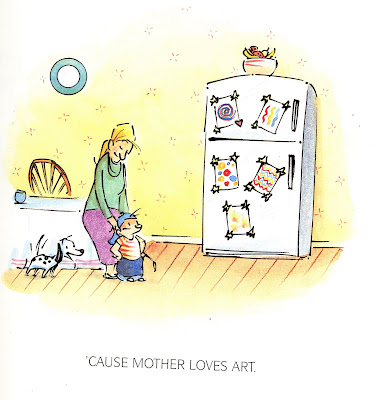 Another of McDonnell's children's books is Just Like Heaven (Little, Brown; 2006). 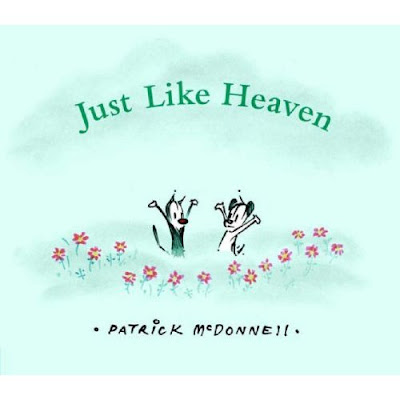 This is a picture book featuring the Mutts stars, and appears to be based on a few strips from the Mutts strip (Examples here).

Mooch takes a nap under a tree, and while he's asleep, a fog rolls in. When he wakes up, he finds himself suddenly surrounded by clouds and comes to what must seem like an obvious conclusion to the mind of a child (or the child-like mind of a cat): 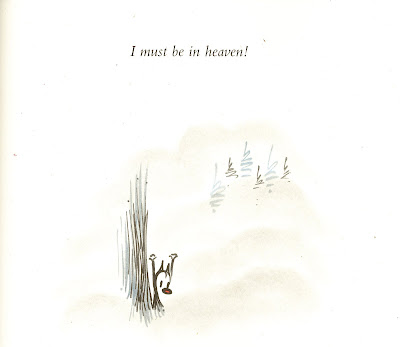 From there, Mooch explores the world around him, the supposition that he's in heaven coloring his perception of it, so that the little everyday details seem both more dramatic and more benevolent. Part of it is merely appreciating what usually goes unappreciated because it's thought to be mundane rather than divine, but it also allows Mooch to confront problems. For example, when a chained bulldog begins barking at him, his first thought was to run away, unitl he wondered how barking bulldog/cat relations go in heaven, and he ends up hugging the problems away.

Like the very best childrens' books, it's both simple and beautiful in its message and in its execution. Each page is pretty airy, and used like one giant panel of a comic strip. A usually rather small image fills the lower portion of the page, the edges bleeding into the whiteness of the page or the gray clouds of the fog, while short, declarative text runs across the top. McDonnell's art is, as usual, almost calligraphic in its simplicity, and appears even more so in this book than in the comic strips, where his lines are more crowded by the tiny boxes. Here, the boxes are gigantic, giving even greater power to his few well-chosen lines.

This is a children's book that belongs on every child's book shelf. And, I imagine, most adult's. 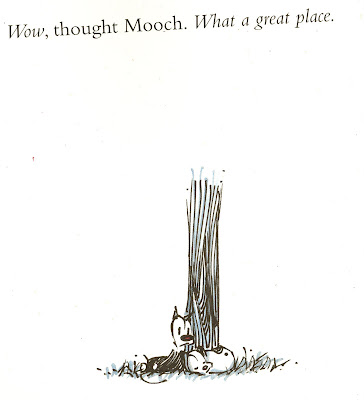 Labels: mutts, patrick mcdonnell, this is not a graphic novel

I agree that McDonnell is a hell of an artist--Mutts is easily the best looking comic strip in print--but it's been a long, long time since it's been funny. Still, I need to hunt down some of those children's books. They look grand.