Wonder Woman at her not-very-good-est 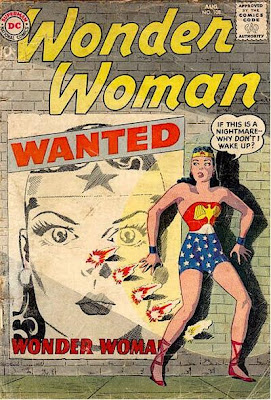 The ever quotable Rachelle Goguen of Living Between Wednesdays had this to say in her review of writer Gail Simone’s debut issue of Wonder Woman:

Now, a lot of people have said lately that certain writers have "ruined" Wonder Woman. This is simply not true. Wonder Woman was NEVER GOOD IN THE FIRST PLACE. Please tell me when exactly the Wonder Woman title was good. The way some people talk, it's like she's the greatest character of all time, and certain recent Wonder Woman events have reduced her to a two-dimensional, boring character who can't stand on her own. People...this is what she has always been like. I'm not saying it's right, I'm saying it's the truth.

Now, Wonder Woman actually was quite good before, even great. When was that? Well, around 1942 to 1947 or so. There have been high points since, certainly (Much of George Perez’s run, most of Phil Jiminez’s run), but Goguen has a point—Wonder Woman was quite often really terrible.

(I had previously used the amount of time it took DC to get around to publishing a Wonder Woman Showcase volume as possible evidence that Wonder Woman just wasn’t as much of a priority for readers or DC as many of their other heroes are, but, having finally gotten around to reading Showcase Presents: Wonder Woman, I understand that maybe it was because they wanted to publish some volumes of good comics first to establish a market, even if it meant shining the spotlight on lesser luminaries like Jimmy Olsen, Metamorpho and Elongated Man first).

These comics are all written by Robert Kanigher (I know! Bad Kanigher comics, who would have thought such a thing possible?), penciled by Ross Andru and inked by Mike Esposito.

They kind of reboot Wonder Woman continuity, although I’m not sure the words “reboot” and “continuity” existed in 1958. And even if they did, it’s not like you could go online and complain about how Kanigher’s failure to include a giant kangaroo rodeo in his origin of Wonder Woman clearly contradicted Sensation Comics #1, because there was no such thing as the Internet. Back then, the comics blogosphere was actually a comics telegraphesphere, and it took forever to complain about shit.

Anyway, since World War II was long over, Wonder Woman no longer fought Nazis. Nor did she ride on kangas. Or hang out with sorority girls. Or do much of anything terribly cool.

Her supporting cast consisted mainly of Colonel Steve Trevor, whom she seemed to be dating. He was always trying to get her to marry him, and she’s apparently provisionally accepted his proposal, so long as he waits until her “services are no longer needed to battle crime and injustice.”

To most guys, “when all evil has been eradicated in the world” would sound like a brush-off akin to hen “not in this life time” or “when hell freezes over,” but it seems good enough for Trevor. Although he still checks in every other adventure to see if she’s decided to marry him yet.

(This makes me think Wonder Woman had a weird idea of what marriage entailed; even if she intended to tend house, cook Steve three meals a day, have sex with him one to four times a day, have a drink ready for him when he got back from the office every day and raise his kids, given her stupendous Amazonian powers, she should be able to do all of that and still have enough free time to fight evil with. It also makes me think that there would be a lot less hurt feelings in DC comics in the Silver Age if Wonder Woman and Superman would only have set Steve Trevor an Lois Lane up on a date. Those two are perfect for each other!)

Wonder Woman’s teenage boyfriend seemed like a slightly less needy guy, although he was sexually incompatible with. That would be Ronno or Renno (depending on which panel had the spelling error), whom Wondy always just called “Mer-Boy” (Which seems a litter harsh, considering he called her “Wonder Girl” and not, you know, “biped” or “air-breather” or whatever).

Then there’s her mother, the still-blonde Queen Hippolyta, who checks in often from Paradise Island (and plays a bigger role in her Wonder Girl adventures), and General Darnell, who’s not a character so much as the guy who occasionally shows up to tell Trevor to go do something or other with Wonder Woman.

Her Golden Age supporting cast, Etta Candy and the Holiday Girls, only appear in one story in this volume. They’ve been redesigned, so that Etta isn’t obese or wearing a cowboy hat and boots, and the others are each given a one-not personality. In addition to slimmer, smaller, less rambunctious and less funny Etta, there’s Lita Little, Tina Toy and Thelma Tall (When Wonder Woman asks what kind of story they’d like to hear, Etta asks to hear one about candy, Tina one about toys, Lita about a short girl who gets taller, and Thelma about a tall girl who grew shorter! Ha ha ha ha! Comedy gold!)

There’s a real repetitiveness to the stories, which seem to mostly revolve around Wonder Woman fighting different versions of herself 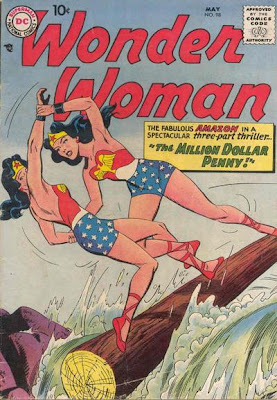 Or giants from different planets and dimensions 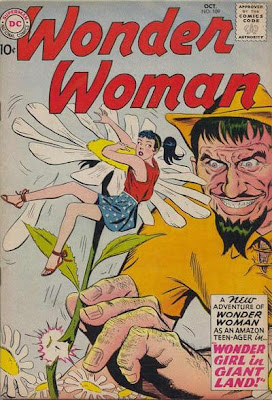 Or both at once 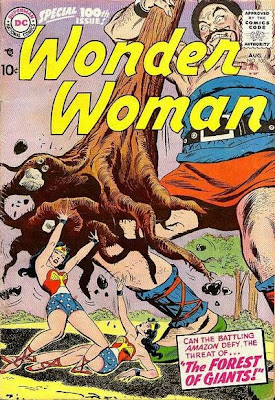 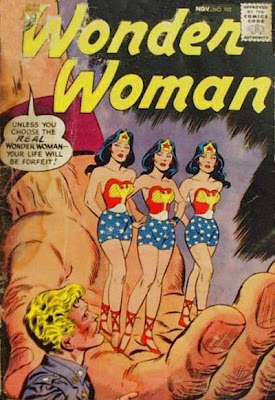 In fact, I’m pretty sure Kanigher just had a fishbowl on his desk full of 12 ping pong balls in it, each with a different word written on it, and when it came time to bang out a Wonder Woman script, he’d just reach his hand in and pull one out for a story idea.

Wonder Woman fights different versions of herself nine times, or in one-fourth of the stories. There are more than nine different fake Wonder Women however, as in addition to robot duplicates and Dimension X doppelgangers, in one story the entire population of Paradise Island dresses up as Wonder Woman and competes against her in a variety of challenges, and in another hundreds of young women dress up as Wonder Woman and pretend to be her to win award money. She also fights a “Tracy’s Day” parade balloon-come-to-life version of herself and a wooden ship’s masthead-come-to-life version of herself.

She also fights giant birds and/or pterodactyls on nine occasions.

She fights races of giants on four different occasions.

She fights only two reoccurring super-villains, neither of which appears more than once in this particular volume. They’re the Duke of Deception, a servant of war god Mars who lives on the planet Mars and bedeviled her during the Golden Age, and The Angle Man, who’s menaced Wonder Woman and her fellow heroes since the 1940s, and continues to do so today.

While the volume proved pretty disappointing (Why did they start it after this comic, but end it before this one?), there are still some decent enough stories in here. 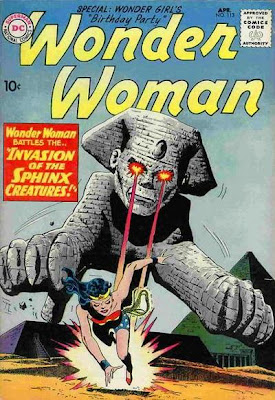 My three favorites include “The Invasion of the Sphinx Creatures!” in which Wonder Woman battles an army of four living sphinx-shaped monuments in the desert before they can invade civilization. The sphinxes make for some really weird visuals, particularly when marching all together over sand dunes or battling one another. See, in the peculiar rules of this stor, “Only by a sphinx can a sphinx be defeated!”

Wonder Woman solves the problem by rebuilding a sphinx around herself and somehow animating it to fight the other sphinxes. How she moves it around, I don’t know, but it looks cool as hell. 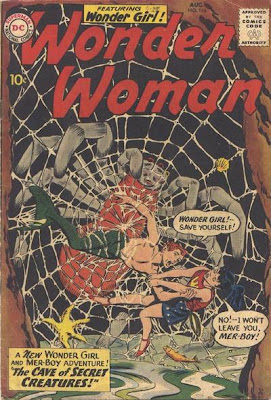 Then there’s “The Cave of Secret Creatures!” in which Mer-Boy tries to get Wonder Girl to like him, and takes the advice of a friendly mer-girl, and tries to make Wonder Girl jealous by taking her to a mer-person dance and then dancing with other girls right in front of her.

It’s only 12 pages long, but plays like a little crappy teen movie, only with added Wonder Woman weirdness, like the mer-teens having an underwater juke box in their underwater hang out, or the mer-people having underwater park benches to sit on (even though they don’t even have asses to sit on!), or Wonder Girl getting ready for a date by bathing in an “Amazon perfume geyser,” and expressing her frustration with Mer-Boy by throwing a giant clam at him. All is resolved for the best when Mer-Boy is trapped by a giant sea spider.

The most delightful story of all though is a nine-pager entitled “Wonder Girl’s Birthday Party!”, in which the Amazon teen is about to blow out the candles of her birthday cake when her mother tells her of all the trouble Wonder Girl’s had with birthday cakes over the years. When she was just two-years-old and still a Wonder Tot (actually, Wonder Tot would appear until Wonder Woman #122, but this is Wonder Girl as a toddler), she blows her cake so hard that it disappears into orbit, and is seen through a telescope orbiting the earth. In later years, earthquakes and freak tornados would keep Wonder Girl from getting to enjoy her cake, and, at the end of the story first a roc snatches this year’s cake, and she fights off the bird, but not before a giant whale can devour her cake.

These stories aside, however, Showcase Presents: Wonder Woman Vol. 1 really kind of sucks.

Both volumes have approximately four plots each, yet there are upwards of 30 stories in each.

Needless to say, after much torturous self-flagellation, I eventually read a full HALF of the stories in each volume before surrendering to the inevitable.

I still feel slightly traumatized and dirty for having made the effort.

(Another book I expect fits in this class: Showcase Metal Men. I wound up with a free copy of Metal Men Archives, and it's more Kanighery three-plots-recycled-again-and-again-and-again wonderfulness. I was able to finish only because the Archive is 1/3 the length of a Showcase.)

I'd never read any of the stories from this era of Wonder Woman, so I was sort of excited to get the Showcase edition when it came out...and then I learned why I hadn't read much of all that. It's kind of not awesome...tho I am still okay with Ross Andru's visual presentation of Diana. But that Kanigher...you know, I think you're right about the Ping Pong balls.

I really really wish that someday, a couple of Green Lanterns will happen upon that birthday cake that is probably still floating in space and wonder just what the hell is going on.

Wonder Woman is a character who *ought to* be great.

The post-Crisis Wonder Woman has had a lot of really great stuff; Perez, Jiminez, and Rucka, mainly, but some interesting things from other writers too.