This Is Not A Graphic Novel...Or Is It?: Bow-Wow Bugs a Bug

The same interests that lead me to become so enamored of comic books, writing and drawing, reading and looking at drawings, have also always attracted me to children's picture books, which also generally feature a fusion of word and image in a print format. I spend an awful lot of time in libraries these days, and whenever I see a neat-looking kids' book, I'll usually snatch it, bring it home and give it a read.

The other day, I saw this one: 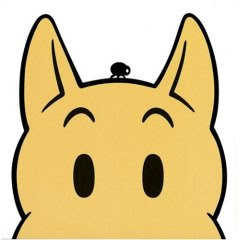 There's no title on the cover, but it's called Bow-Wow Bugs a Bug (Harcourt Children's Books; 2007). I didn't much care for the extreme close up of the dog on that cover (he's actually much cuter on the insid when you can see his whole head; this cropping out of his snout makes him resemble some kind of old Disney cartoon cow or horse), but I really liked the three-legged, almost featureless bug, so I took it home to give it a looksee.

It opens with a full-page image of a little golden dog of the terrier variety cureld up on a little dog bed, sleeping. Then I turn the page, and am greeted by this: 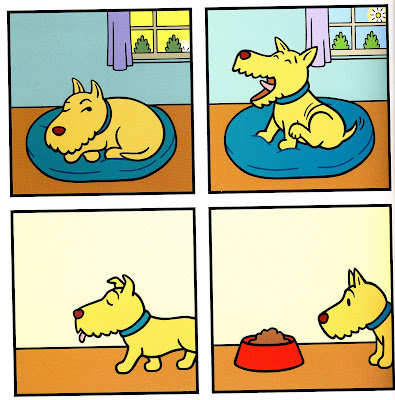 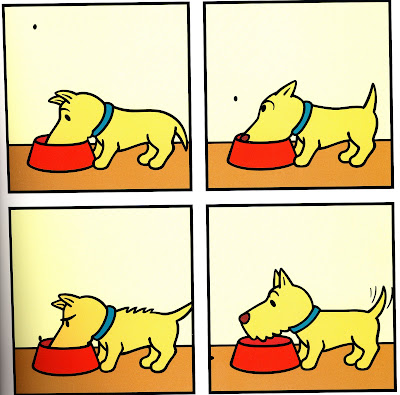 So, is this book a "graphic novel?"

The two local libraries I go to both had it shelved with their childrens' picture books, and its size and shape is such that, without cracking it open, one would assume it's a childrens' picture book (It's nine inches wide and nine inches high, has a spine, is a hardcover, and is only about 50 pages long). There's no suggestions on where to shelve it on the title page or back.

Shelving it with childrens' picture books is certainly the best place to put it, as it will get it into the hands of the intended audience much better than if it were shelved with graphic novels, and I'm not really asking in a practical sense so much as out of curiosity regarding the medium.

The book is wordless, so if the fusion of words and images are integral to graphic novels, then it doesn't seem to fit. But by the most accepted and used definitions of "graphic novels"—which here I'm using to mean "comics" or "sequential art"—Bow-Wow Bugs a Bug seems to be one.

At any rate, it is a great read. It's by Mark Newgarden and Megan Montague Cash. I'm not sure which of them does what, as the credits are a little unclear; Montague Cash designed the book at the least, and Newgarden is a comcis artist with at least one graphic novel to his name (We All Die Alone, which I haven't read yet; but plan to this week on the strength of Bow-Wow).

As you can see in the badly-scanned images above, the book is beatifully constructed, with each panel filled with a clear, sharp image with a nice, thick line, the sort of line that doesn't look drawn so much as simply extant (I really like lines like that, as they give me the impression that the characters they delinieate werent' drawn by artists, but are "real" in the same way you or I are). The images flow perfectly into one another, and the artist/s are in perfect control of the pages, and the way different sizes and shapes of panel effect the flow of the story. For example, big surprises and new encounters always come on the left-hand page, so that the right hand page will set something up, and then you'll turn the page to see womething unexpected.

And the book is pretty muc a series of unexpected encounters. That little black dot in the image aboe is the bug of the title, and Bow-Wow follows it out the doggy door and out into the world. What's going on in Bow-Wow's head isnt' exactly clear. His brow is furrowed as he follows it, but you can't tell if he's angry or just really intensely concentrating on the bug—he doesn't seem to be chasing it as much as following it and looking at it super-hard.

Along the way, he and the bug experience a series of increasingly bizarre situations, like another dog that looks identical to Bow-Wow (save a different color collar) following another book that looks identical to the bug. They met, sniff each other, and then go into the Marx Brother's routine in which the one brother tries to fool the other, thinking he might be a reflection (the bugs play out the exact same sequences in miniature below the Bow-Wows).

I don't really want to spoil any of the weird things Bow-Wow and his bug encounter, as the surreal twists and turns of the story are its cheif pleasure, but there's one of my favorites (note the first image appeared on the right half of the open book, so that you would see something slightly off in the last panel, turn the page and then see the punchline): 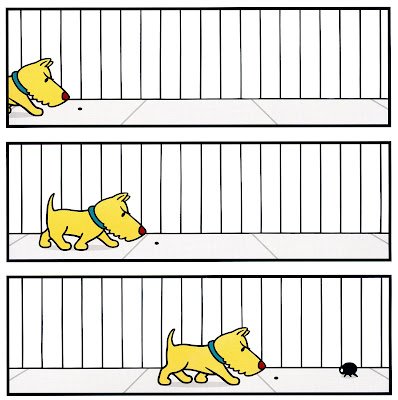 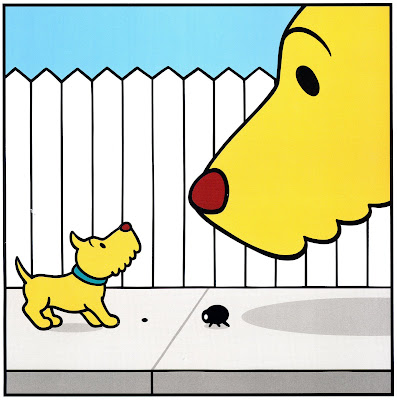 That kicks off a sequence of even weirder, more unsettling things.

Apparently, there are two other Bow-Wow books, both of which have really nicely designed covers, and neither of which my local libraries carry, and two more scheduled for next year. If you like what you see here, check out bow-wowbooks.com. It's a kinda tough site to navigate, on account of the lack of words, but it's full of neat images of Bow-Wow and some odd games and suchlike.
Posted by Caleb at 4:50 PM

That book sounds really great. I should check *my* local library for it.