Daredevil #9 (Marvel Entertainment) You're not sick of people on the Internet raving about how great Daredevil is yet, are you? Oh. Well, um, there's another review underneath this one. So in this issue, Mark Waid picks up where last month's cliffhanger ended, with Daredevil investigating the theft of his father's coffin, along with the coffins of everyone else buried in that particular cemetery. while moving forward with a story thread from the past few arcs.

It's deft plotting, and, as with several other issues, Waid finds an interesting setting and situation to throw someone with such spectacularly strange senses into, as Daredevil follows the grave-robbing Moleoids to their master. And what does The Mole Man want with a bunch of coffins full of a bunch of corpses? That's not yet laid out, and it's a pretty intriguing mystery.

As top-form as Waid's scripting is, the art is, as usual, spectacula. Paolo Rivera pencils, Joe rivera inks and Javier Rodriguez colors, and this issue is just full of blacks, as that color seems to be nibbling at the edges of almost every image in this issue, as Daredevil's journey gets darker and darker.

Here's a detail of a two-page spread, in which we see Daredevil creeping into the underworld, on the trail of the Moleoids hauling coffins, as they head into an immense cavern lit by magma/lava: 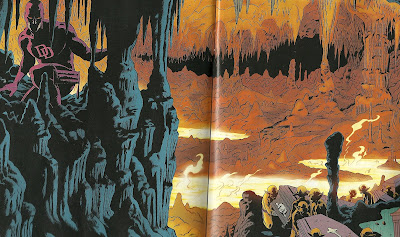 It's a bad scan (it wouldn't all fit on my scanner), but look at the detail in it, and look at those colors. Wow.

Here's one neat two-panel sequence, in which Waid, the Reiveras and Rodriguez reveal that, for whatever reason, the Mole Man's monsters are invisible to Dardevil's radar vision. 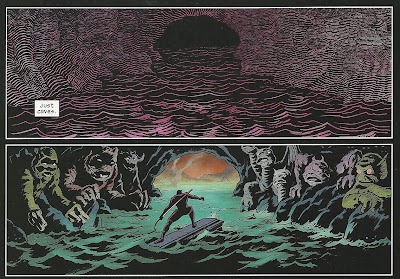 So in addition to the scary little Moleoids Rivera draws, our hero is surrounded by unseen monsters throughout the story.

I'm running out of ways to say "Daredevil is a great superhero comic," but it is. In fact, it's at the top of the heap of comics the major publisher's are producing these days.

Oh, but it's not all peaches and cream. There are 20 story pages in here, plus a recap page and a letters page. And there are 12 pages of ads and, get this, every single one of them is a house ad for another Marvel comic, the only ones that aren't full-page house ads are the two that are two-page house ads. What a strange waste of space; no wonder Marvel charges $4 a book so often; they apparently don't get any ad revenue anymore.

Reading Daredevil today was the first time I've read a Marvel book and thought that there were too many ads in it—two consecutive pages of story without an ad are rare this issue—since the early issues of the David Aja-drawn Iron Fist, which is why I ended up dropping the title, figuring it would read better in trade, without all those ads getting in the way of the flow of Aja's superior art. (Although I never actually got around to reading those trades). I'd consider dropping Daredevil for the same reason—this stuff is gonna look great without an ad for AvX every other page—were it not one of the few comics I'm still reading as it's serially published.

Wonder Woman #6 (DC Comics) While Daredevil's cover alludes to a trip to the classical, mythical underworld, the actual, classical, mythical underworld plays a role in this month's issue of Wonder Woman. Diana and her allies Hermes and Jason Statham pull of their sneaky plan to get Hera out of their faces, a plan that involves simultaneously confronting both Poseidon and Hades (whom are given wonderfully idiosyncratic redesigns and the appellations Sea and Hell to further distance them from the Olympians' appearances in previous volumes of Wonder Woman.

What exactly happens and how was a little muddy, and that it works in-story isn't something clear to someone not actually in the story, since how the hell would we know that the thing they use affects the other thing that way, but I got it the second and third time through.

Tony Akins is still in Chiang, and his art's still pretty great, but it's a bit of a bummer that the series' artist missed such a substantial chunk of its opening arc.

I was pretty vocal in registering my disappointment that DC's rebooted-for-the-21st century Wonder Woman was still going to be the ruthless efficient, brutally violent, post-Kingdom Come Wonder Woman, rather than the, um, "real" Wonder Woman*, so I suppose I should point out that as the book's progressed, she's only gotten more over the top.

In the first issue, she lopped off a fleeing centaur's arm with a sword (when her magic lasso was right there!) and, in this issue, she again faces that same centaur and she... 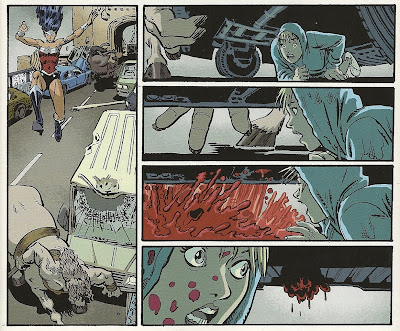 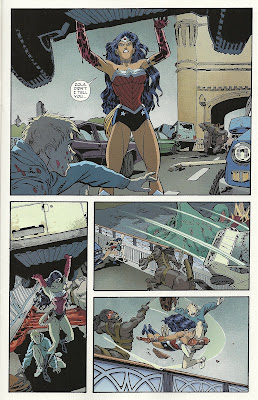 ...well I guess she reduces it to a red smear on the pavement, staining her arms to the elbows in its gore.

I am glad writer Brian Azzarello and artist Akins decided to stage that scene so that her splattering her opponent happens out of sight, but, still: Yeesh.

I love that sequence of him exiting the cave. I stared at that radarsense panel for a full 3 minutes, and I swear you can see hints of the monsters! It's like radarsense camouflage.

I like to fold my comics front-cover-to-back, so I read one page at a time. Those two-page spread ads like those X-men ones get really annoying.

If I remember right, Cliff Chiang had about 8 issues on Green Arrow/Black Canary before Mike Norton filled in for and eventually replaced him, and then I lost interest. Hopefully that doesn't happen with Wonder Woman.