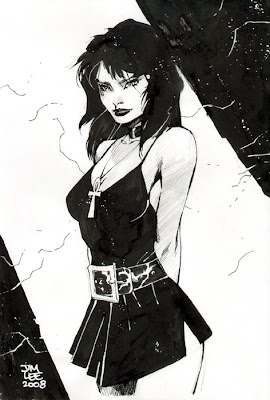 I don't usually link to single pieces like this in the middle of the week, but I want to make an exception here, because I just had a bone-chilling thought I thought I'd share with you.

My fellow Robot 6 contributor Tom Bondurant's regular "Grumpy Old Fan" column addresses this week's Topic A in the comics industry, and in the process of talking about DC's decision to exploit Watchmen's singular vision, he refers to other DC books whose popularity and success are similarly dependent on singular visions:

Starman was one of the rare series where one writer introduced a character (Jack Knight) and took him through a series of adventures, until that character reached the natural endpoint of his life’s particular phase. Neil Gaiman’s Sandman preceded it, and Garth Ennis’ Hitman followed.

Robinson hasn’t returned to the character of Jack Knight since Starman ended, although he used a few Starman characters in his Justice League work(and I’m pretty sure one of the supporting cast showed up in the year-long Trinity miniseries, with which Robinson was not involved) — but more to the point, no new creative team has explored what Jack, or Sandman’s Morpheus, or Hitman’s Tommy Monaghan, has done since their various series ended. There is a firewall around these characters, if not their unique milieux, apparently reinforced only by friendly agreement.

If DC will go ahead with more Watchmen, of all things, and, more importantly, if it succeeds—and I've read a lot of troubling comics and at least one very troubling piece from someone who covers the comics industry that suggest DC's audience isn't as unanimously dead-set against the endeavor as I assumed most comics readers, creators and care-ers about would be—does that mean we'll see a Gaiman-free Sandman relaunch of some sort next?

I don't think there's much danger of a Hitman revival, or even a Starman one—certainly not as long as Robinson and DC seem to be working together as nicely as they have been the last few years—but Sandman seems like the obvious next sacred cow to slaughter when they're done with Watchmen.

DC and Vertigo were extremely cool to Gaiman in letting him end his story, and Neil Gaiman has been extremely generous with DC and Vertigo for allowing them to exploit the world he created out of some of their dustier old trademarks, which they did rather extensively in the ongoing series The Dreaming and I forget how man character-specific spin-off one-shots and miniseries. Even the examples Bondurant mentioned, with Morrison using Daniel in JLA or Cornell using Death in Action, Gaiman was consulted with (I'm not sure if he was regarding Daniel and Sandman-appropriated characters showing up in Robinson, Goyer and Johns' JSA comics, though).

If DC will do sequels to Watchmen, what else will they do? Or, put another way, what won't they do?

I don't know the exact agreement the involved creators had with DC/Vertigo after Sandman—I suppose I could look it up online, but I've got a couple of paid writing-about-comics-pieces to get to tonight yet, so I'm trying to keep this short and alarmist—so maybe (hopefully) there can't be any more Transmetropolitan or Preacher or 100 Bullets, but a chill ran up and down my spine reading Bondurant's post as such possibilities occurred to me.

With all of the examples he mentioned, and the other creator-specific Vertigo series I can think of, the appeal of those series wasn't simply the characters, but the characters as defined by their creators, and the story told by those creators featuring them. That's what readers and fans liked and, conceivably, might want more of, not simply to see Morpheus show up for 20 pages a month indefinitely.

Of course, that held and holds true for Watchmen too. I don't believe there are many people who are fans of Rorshach or Nite Owl as intellectual properties (And, if there are, there are plenty of other, better violent masked fedora and trenchcoat-clad vigilantes and gadget-wielding superheroes dressed up like creatures of the night for fans of those IPs to choose from). Those fans are actually just fans of Alan Moore and Dave Gibbons' Watchmen.

I think the whole problem lies in the fear of trying to make comics look "more serious" by giving them a format similar to prose.
Watchmen won´t look prose-y/mature if it is an ongoing.
But for me that´s inherent to the medium, or at least to mainstream american comics.
There´s nothing really wrong in Sandman having a monthly comic. Neil Gaiman´s original Sandman, Rob Liefeld´s Sandman, Geoff Johns´ Preacher or whatever as usual.
The best example in reality I guess is Swamp Thing or Animal Man.

I think I read Gaiman is really smart and negotiated to keep Sandman rights, so you need his permission to use his takes on Death or such. I think???

Gaiman has creative control over the characters he created for Sandman, so no, they aren't going to use them.

Some rumors exist that James Robinson has the same creative control in place for Jack Knight, but that hasn't really been confirmed.

Also, if anyone cares, Ellis and Cassaday have the same creative control contract on Planetary, so they won't make their New 52 debut anytime soon.

Geoff Johns' Preacher? So we'd get a six-issue "Rebirth" mini-series where Cassidy gets re-vamped, God comes back, and Jesse whines about the significance of his father's lighter? (Okay, the last one actually happened, but still....brrrr....)

If I thought DC was breaking the law by doing BW, then I'd feel pretty bad about the projects. But they have their contract that says they can do it. Alan Moore wouldn't sign that contract today, but it was a generous deal at the time and has made him a rich man. He got a better deal on it than most of his comics creators predecessors at the time and many have used his example as leverage to get even better deals for themselves since that time. This is the progression of creators' rights.

If the BW comics are shitty, or meh, then let's complain about that. They won't be AS great as Watchmen, but I for one won't be comparing them to the original. I just want some more good comics. If I can stomach reading Scott Snyder's Batman even though he's treading on the legacy of Bob Kane & Bill Finger & Jerry Robinson, then I can sure as hell try to enjoy a few BW titles without feeling like I'm betraying Alan Moore.

J. Caleb, I agree we should be wondering if 'Beyond Watchmen' is a hit, can 'After Watchmen' be far behind?

And what flood gates will that open? Superman vs. Dr. Manhattan? Batman vs. Nite Owl? Rorschach vs. Lobo? Hey, as long as it sells, who cares if it's crap?

I've been arguing with my big brother over this at my blog. I'm on the side of leaving alone what was done right the first time 25 years ago by Moore and Gibbons and he's all in favor of pimping Watchmen out for a fast buck.

In the never-ending battle between art and commerce, I like commerce, but I support art.