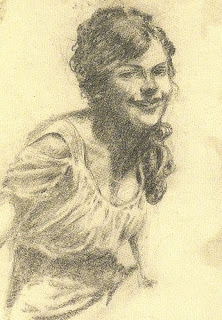 As an artist and writer, Wanda Gág is known for her fairy tales, those she invented herself, and those her old world ancestors used to tell, the ones collected by the Grimm brothers, and translated into English and illustrated by Gág.

But as has often been pointed out, Gág herself resembles a plucky fairy tale heroine. The first of seven children, a magical number, she was born at the end of the 19th century to Bohemian immigrants with a connection to a rural enclave of barely-changed immigrants—her Grandma lived in a place called Goosetown, and the Gág children referred to the people there as “Grandma folks.”

Her father died when she was 15, still a maid, and she began to live a life of hard work that makes it look like Cinderella had it easy—in addition to caring for her often sick mother and helping keep house for six younger siblings, she also went to school and stayed up late nights, drawing things she could sell and drawing things simply because she loved drawing things, and would spend all day doing so if she could.

By virtue of her years of hard work, perseverance and talent, she earned a scholarship, then another and moved to New York City. A successful gallery show later, a publisher asked if she ever thought about publishing a kids book—she had and, as a teenager, had little stories and poems published in children’s magazines—and published 1928’s Millions of Cats, a massively successful book. She bought a ramshackle New Jersey farmhouse, dubbed it “Tumble Timbers,” and lived her own version of living happily ever after—writing and drawing whatever she wanted. 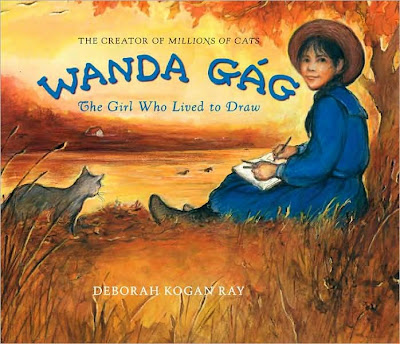 It’s no surprise then that a modern children’s book author would want to tell that fairy tale in a book of their own, and that’s precisely what Deborah Kogan Ray did with her 2008 book, Wanda Gág: The Girl Who Lived to Draw (Viking).

Ray’s book takes a rather Hollywood biopic approach, beginning at a moment of personal triumph, and then flashing back to the beginning of the story.

The first image is of Gág’s Tumble Timers, the mailbox with her name in the foreground, and the a figure in a hat standing on the porch. The text tells us that it’s 1928 and “an artist named Wanda Gág” has just created her first book for children.

“That rainy spring, as she polished the words and prepared to draw the illustrations in her studio,” the narration tells us, “she would often think of her own childhood.”

A turn of the page starts the story proper. Each two-page spread features an image of Ray’s, which fills at least one of those pages, but in many cases stretches over the gutter and onto the second page.

The text portion of the spread begins with an italicized quote from Gág, taken from her Growing Pains, a publication of her girlhood diary, in italics. Below that Ray tells the appropriate part of the story. 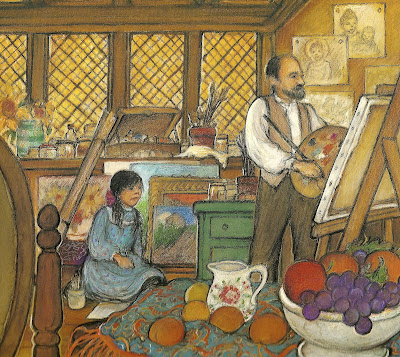 Ray focuses quite a bit on Gág’s childhood, her family’s encouragement of their children to be creative, their journey’s to Goosetown and, especially, Wanda’s special connection to her father, an artist who made his living by painting decorations on buildings and churches six days a week, and spent Sunday’s painting what he wanted for himself.

His last words to Wanda on his deathbed were, translated to English as Ray recounts them, “What Papa couldn’t do, Wanda will have to finish,” a too-perfect to be fictional hook that provides a story arc to Wanda Gág’s biography—first by working hard at keeping the home together and taking care of her mother and siblings, and then by achieving fame as an artist, Gág finished her father’s two callings for him. 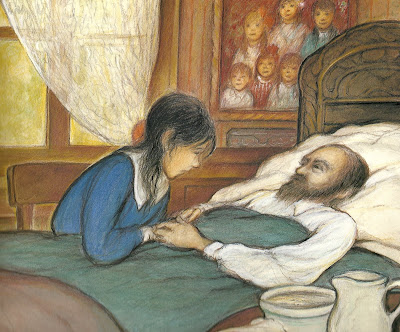 Ray traces Wanda’s life back up until the starting point, and ends with how successful her book turned out—“In 1929, Millions of Cats was awarded a John Newberry Honor…Many now consider it to be the first modern picture book”—and sort of happily ever after that calls back to her father’s last words:

Wanda went on to create many other picture books and make many more prints and drawings that she exhibited.

The girl who lived to draw carried out her father’s wish.

“What Papa couldn’t do, Wanda will have to finish”

The book features three one-page epilogues: After Millions of Cats, recounting highlights from Gág’s professional and publishing career; Wanda’s Diary, about the diary she kept and which much of her biographical information came; and Author’s Note, telling a little bit about the creation of this book.

It’s a rather wonderful little biography of the artist, one perfectly suited to what I would like to think is her ideal audience, little girls who also like to draw, and would also like to one day become artists—in that respect, I think Gág in an ideal hero and role model. I sincerely wish I had learned her story at six or seven instead of in my mid-thirties.

Because Gág was, as Ray says in her author’s note, “a saver,” Gág provided her own biography, although she did so in a strange way. When asked to write an autobiography, Ray tells us Gág demurred, as “a book of recollections about her girlhood would not have the freshness and sense of wonder that she sought in all her work.” So they published her diary instead, which has the freshness of immediacy.

Ray is quite an accomplished artist, as the small samples I’ve chosen to highlight here will hopefully convey, although hers is not a style I’ve ever particularly been enamored with. The artwork is alive with lines, and thus a very organic, very living set of drawn pictures, but there’s a slight, impressionistic blur to the work, and an unnatural warmth. 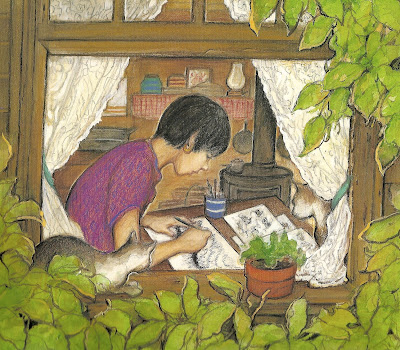 Her art is realistic in design, but obviously artificial as drawn art simultaneously—It’s fine work, but it’s not the sort I naturally gravitate towards.

I’m of two minds over how appropriate it is as well. Both Wanda and her father longed to create the images they wanted in their lives, and it therefore seems appropriate that Ray illustrates their story in her own style, whatever that style may be.

But if form is to reflect content, then I wonder if a book about Gág drawn in a style similar to Gág’s, with its big, bold, black and white figures and rolling settings winding their way from one page to the next might not have been more appropriate.

Ray tells Gág’s fairy tale life like a fairy tales, but not as one of Gág’s own fairy tales.

It’s something I’d like to see done at some point, though. 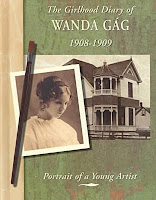 The Girlhood Diary of Wanda Gág, 1908-1909: Portrait of a Young Artist (Capstone Press; 2000) also uses Gág’s diaries as source material for her story, but this work is meant as a more straightforward educational tool, and while the story is still there, it’s obviously not as engagingly told.

This slim, 32-page volume is part of a Diaries, Letters and Memoirs series, meant to educate young readers on different time periods. Other books include A Civil War Drummer Boy, A Colonial Quaker Girl, A Pioneer Farm Girl and so on. Other recognizable names in the series include Louisa May Alcott, Charles Lindbergh and Theodore Roosevelt.

There is a two page summary of Gág’s childhood, and then excerpts from the diary entries themselves, which account for the bulk of the book. I’ve read the entries in their entirety in Growing Pains, and these are mostly shortened versions, using ellipses to edit them down into shorter, more child-friendly chunks. They aren’t bowdlerized or anything, though; Gág’s industriousness, ambition and dreaminess shines through, and I think it’s probably enough of a taste of Growing Pains that a young reader might want to follow up with that book when their older.

An afterword tells readers the rest of Gág’s story, up to her death and legacy, and there’s a timeline, page of places to find out more, and a “words to know” glossary (“deplorable,” “glee club”, “tuberculosis,” etc).

The book is also full of little activities to do—“Draw a Profile Face,” “Making Spaetzle”—and a few sidebars expounding on things referenced in the diary—“German and Bohemian Traditions,” “Ladies’ Turner Society.”

The images in this book—which is fairly heavily illustrated—consist mainly of photographs and images of Gág’s art, particularly that from the time period in which she was keeping the diary.

As more of a teacher’s aid than a book-book, I’m not sure how to recommend this one to interested parties. I suppose I’d recommend it to grade school teachers who want to teach their kids about Wanda Gág.

The Girlhood Diary's timeline included several photos. Here's one of Gág’s father, Anton. Note the way that this image was later echoed by a photograph of Gág from 1916 or 1917... 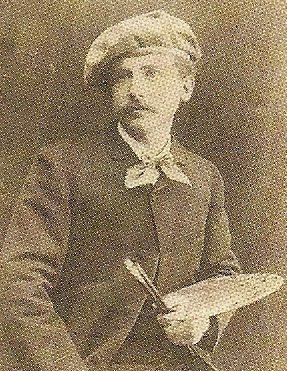 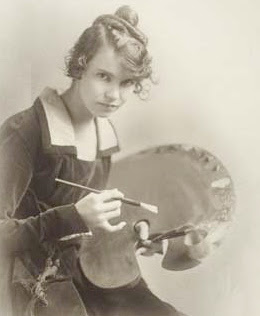