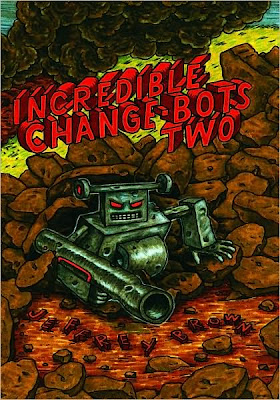 The other day I was in a dollar store and was amused to find this Transformer robot in the toy section: 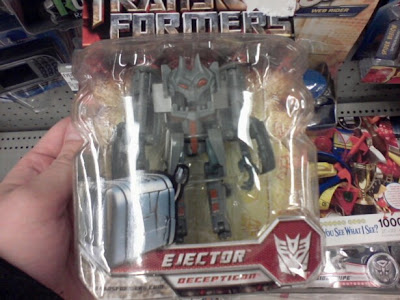 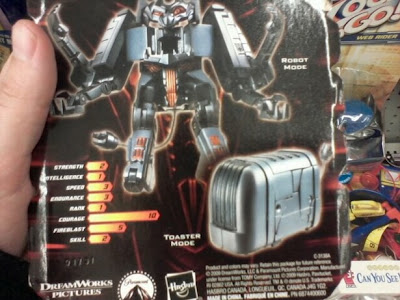 So amused that I almost bought it, but ultimately decided I would rather have more money in my wallet than another Transformer toy I'm too old to play with collecting dust. As you can hopefully tell from the cellphone pictures I took, his name is Ejector, and he transforms into a toaster.

I don't remember seeing him in any of the movies, but I assume he was in one of the first two, probably during one of the "funny" bits I blocked out of my memory.

I tried to remember if there was a robot that turned into a toaster in Jeffrey Brown's strange nostalgia parody/celebration of the original Transformers cartoon/pleasure of playing with toys as a kid, The Incredible Change-Bots, as it seemed like there probably should be one: I know he had a microwave character named Microwave who, like the Decepticon tape recorder Soundwave housed smaller robots within himself, although Microwaves robots were little robots who could turn into a package of microwave popcorn and a bowl of soup, and they were named Poppy and Soupy, respectively.

So I ordered it and, upon its arrival, I sat down to read them both back to back.

There is no toaster character. The only robot that can transform into a common household appliance to appear in the second volume that wasn't in the first volume is Laptopor (You can probably guess what he turns into).

As someone who grew up watching Transformers every day after school at 4:00 p.m. (and G.I. Joe every day at 4:30), and whose birthday and Christmas wishes revolved around their toy line (along with those for G.I. Joe and He-Man), I was a big fan of Brown's original book. The situational humor and gags were funny by themselves, although the many digressions spent on exploring questions the cartoon raised were certainly the highlight for me. You know, why were the Transformers fighting in the first place, why didn't the Autobots ever give chase to the Decepticons after defeating them, why were fleets of random vehicles with no drivers considered "disguises" and so on.

Brown further gave his characters the sorts of names and designs that made them seem like they came out of his childhood notebook—there's a Megatron analogue named Shootertron, for example, and a race car named Racey—that gave the endeavor a refreshing naive quality. While the characters were analogues to Transformers characters, they weren't analgoues in the way that, say, Alan Moore and Dave Gibbons' Watchmen characters were inspired by the Charlton characters, or even the more obvious and clumsy ways that some of Mark Millar's more recent high-concept, "twist" characters are stand-ins for Captain Marvel and Batman.

The best, most touching part of the Change-Bots, however, was the way Brown captured a sense of play in his narrative, from the sound-effects ("Bew! Byew!") to characters calling time-out in a battle because their arm is stuck or because it takes a while to set up their accessories.

The original was a pretty complete story, and did all of the above in a satisfying manner, ending with the warring robot tribes leaving Earth forever. It didn't exactly scream for a sequel, but hell, Michael Bay made three Transformers movies so far, and they've all been just awful, so why can't Brown do a sequel to a good narrative featuring warring robot clans on earth?

In the sequel, the heroic Awesomebots and the evil Fanstiscons are traveling through space together, looking for a new home (having long ago destroyed their home world of Electronocybercircuitron). The only Change-Bot left on earth is the evil Shootertron, who was seemingly destroyed after a climactic battle with his brother, Awesomebot leader Big Rig.

He's survived, but is now amnesiac, and is taken in by a kindly old couple in the Midwest, and they raise him as their own. He eventually recovers his memory though, just as the Change-Bots re-crash on planet earth, and their ages-old struggle begins anew.

Brown's art is slightly sharper in this volume, although it retains enough of it's primitive, home-made quality that it doesn't lose any of the charm of the original's slightly rougher art. With the broad, foundational elements of the inspiring franchise addressed in the first volume, here Brown is free to indulge in more awkward humor, faux melodrama and cycle through various, distinct elements of the Transformers, including the Headmasters, the ineffectiveness of fighting human beings with laser beams (mirrors thwart them...at least until they decide to use their giant robot fists to pound the puny humans), the badges/decals used to differentiate Decepticon from Autobot, the later addition of giant robots to the line and, to my great personal excitement, Change-Bot analogues for the Insecticons... 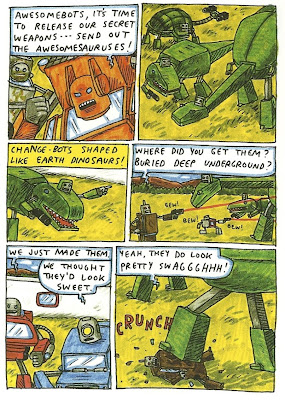 Though the ending of this volume seems pretty final, and Brown has a lot on his plate these days, including work on a feature film (sadly, it's not an adaptation of Incredible Change-Bots), it does end with a "Probably to be continued...!" box, so there will probably be more some day. Brown hasn't even made any combining robot team jokes yet, so there's certainly more for Brown to cover.
Posted by Caleb at 8:11 PM

This is so cool.

I believe Ejector was based on a robot seen in a Mountain Dew commercial.

Sadly, the vending machine with a Mountain Dew cannon seen in the first movie only got a Robot Heroes version.