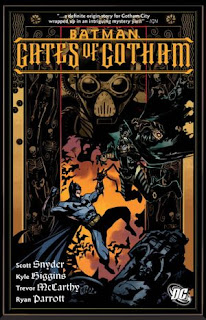 In the earlier story, the bomber was destroying Gotham's modern architecture, and the point of the story was to provide an in-story reason for artists to start drawing the comic book version of the fictional city to more closely resemble the movie version of the city designed by Anton Furst (I don't believe the story, which ran in a single issue each of Batman, TEC and Legends of Dark Knight, has ever been collected, but it seems like a pretty good candidate for collection in one of DC's DC Comics Presents line of almost-trades).

In Gates, it's the original architecture that's the target.

The point of this story? It seems to be two-part.

First, co-plotter Scott Snyder, who is currently exploring some sort of shadow history of Gotham in his Batman run, retcons the history of Gotham City to establish founding families that include Batman's ancestors the Waynes, The Penguin's ancestors the Cobblepots (which seems to borrow an element from the characterization of The Penguin from the 2004 cartoon series The Batman), Hush's ancestors the Elliots and Batwoman's ancestors The Kanes. The other turn-of-the-century characters whose legacy is picked up in modern Gotham are the Gates, brother architects responsible for building the city's most unique architecture, under the patronage of the wealthy families.

Secondly, this is a somewhat light exploration of Batman's various sidekicks after his Final Crisis "death;" there have been a lot of such explorations during that period, but this one is separated from those by its fairly high quality.

Snyder gets top-billing, but he's only one of the three writers involved. Kyle Higgins does the lion's share of the work, co-plotting all five issues with Snyder, scripting two issues by himself, and scripting the other three with a Ryan Parrott. Trevor McCarthy provides most of the art, but something went screwy in the planning and production of the series, so that the penultimate issue features lay-outs by Graham Nolan and drawn by Dustin Nguyen and Derec Donovan, both of whom apparently pencil and ink their own work.

It's awfully unfortunate, as the strange, visual interruption draws such a sharp contrast to the other four—Nolan and company's fourth issues is clearer and easier to read, and Nguyen's style is more pleasant and better-suited to the story and characters, and Donovan's looks a little worse than both, at least to my eyes.

It's also a little perplexing, given the fact that this is a continuity-light, standalone miniseries, and DC could have easily waited until it was all in the can before they announced it, let alone started shipping issues.

The story is divided between the past and present. In the latter, a costumed criminal in a suit of armor that Tim Drake calls "steam punk-y" is blowing up bridges and other architectural monuments connected to the founding families, and Batman Dick Grayson and his allies—Robin Damian Wayne, Red Robin Tim Drake and the recently re-dubbed Black Bat Cassandra Cain—are trying to discover his identity and stop him.

In the former, the Gates' journal tells their story, the story of the building of Gotham City, a conflict among the families, a murder and revenge for that murder.

That past feeds the present, as the descendants of the Wayne clan (only one of 'em an actual, biological descendant) try to protect Hush and Penguin from the Gates' descendant, who has taken the name "The Architect."

It's all rather Batman 101, but I suppose if you read enough of these sorts of comics—and God knows DC has made it easy enough to be able to do so—than the change in setting is probably pretty refreshing, even if that change is simply a century backwards in time. Personally, the thing I enjoyed the most was the It Takes a Village To Be Batman aspect, with all of the original Batman's sidekicks forming a big family team in order to crack the case.

Snyder and Higgins give each of them unique roles to play, with unique personalities and skill sets, and they mix and match the characters rather charmingly throughout the story, so all of them seem necessary to the plot, which could have quite easily been slimmed down to be a simply Batman vs. A Villain story. Unfortunately, it was also a little sad reading this and appreciating how well they juggled the cast while knowing, in the back of my mind, this exact dynamic with many of these particular characters probably isn't going to show up again any time soon. For starters, after the "New 52" reboot, its unclear if Cassandra Cain even exists anymore.

McCarthy does a nice job on the character designs, especially when it comes to differentiating all the dark-haired young male heroes form oen another, and there's an appealing energy to his work. Some of his designs were a little over-the-top—his Penguin looked a little too much like a Muppet, for example—and he relies overmuch on recycling images of characters on the same page (It was obvious enough to notice, but certainly not as egregious as the most appalling example I can think of). I didn't think the action was terribly clear at all times either; it wasn't muddy or hard to read, but it didn't move and snap as much as I would have liked.

Nevertheless, Gates of Gotham was an all-around better-than-average Batman comic (although it is worth noting that the average quality of Batman comics have plummetted rather dramatically over the course of the last five to ten years. Fans of the pre-reboot status quo, and, especially, the terminally mis-used Cassandra Cain should be more delighted in this than most. (I know I thought repeatedly, "Yes, this works fine! This is Cassandra Cain as she should be going forward"...again, only to be bummed out knowing that it probably won't, maybe even can't be).

Also included in this collection is the story of "The Nightrunner," which apparently filled parts of Detective Comics Annual #12 and Batman Annual #28. That's the one that introduces a new member of the Batman Incorporated initiative, the French Muslim parkour expert Bilal Asselah. It's presumably included because it too was written by Kyle Higgins and drawn by Trevor McCarthy (and it too plugs nicely into the Batman Inc status quo on display throughout Gates).

The story seems to be missing parts, including the conflict that defines our hero and brings him to Batman's attention, and a meeting with the original Batman, but I liked what was here a whole lot. Nightrunner is a pretty cool character design, a sort of Spider-Man-meets-Batman concept, and McCarthy's cartoony-faced, fluid-limbed characters seem perfect for a story with a character like that at its heart. It's a nice reminder how great the Batman Inc concept is—this isn't Morrison-related at all, but it's still compelling seeing different people in different cultures rise up to be their own Batmen—and, again, a sort of sad reminder that there were some babies in all that bathwater DC dumped during the Flashpoint-to-New 52 reboot.

Batman Inc is being restarted soon though, so maybe at least some of the virtues on display in this trade will be recovered for future use.
Posted by Caleb at 11:09 AM

What went wrong in the fifth issue is that the creators had to hurry up and get it done before the September relaunch of DCnU. I believe Gates doubled shipped either in July or August when it had just begun in May. It was also billed as a beginning thread that would run through the rest of the bat books... or at least Snyder's. That obviously didn't happen.

Yeah, it was originally solicited as 6 issues, not 5, not to mention that the solicitation for the first issue bears no resemblance at all with what we actually got. It seems fairly miraculous that the book ended up being pretty good.

I really wish it could have kept McCarthy as the artist for the whole run. I can understand having fill-in artists on ongoings, but it's so jarring for a short miniseries to have several changes in art style (though Nguyen tries his best to imitate McCarthy). The relaunch was really this book's main villain, I think.