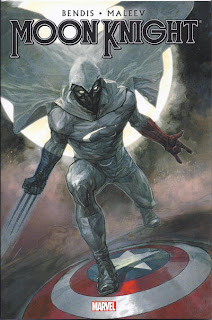 Last year Brian Michael Bendis began writing the newest volume of a Moon Knight series for Marvel, teaming with artist Alex Maleev, with whom he had enjoyed a long and popular run on the title of another of Marvel’s gritty, street-level urban crime-fighter characters.

The particular tack Bendis took was a somewhat familiar one he had honed over the years of his writing New Avengers; in order to help ensure the popularity of a character he liked, he made him an Avenger. Now the Moon Knight character has had some affiliation with the team before and, in fact, was currently on an Avengers team at the time the book launched—the black ops version of the team in Secret Avengers, one of the few Avengers books Bendis doesn’t write—but here Bendis gives his star an Avengers-developed and approved mission, and he puts the three most popular Avengers in every issue.

The twist, which is telegraphed on the cover, and which I’m about to spoil since this is a six-month-old storyline, is that all of this Avengers business is simply in Moon Knight’s head. The character began life as a Werewolf By Night villain who then transitioned to a clumsy Batman knock-off, but his defining trait over the last decade or so has been that he’s a literal crazy person, someone suffering from a variety of fairly severe mental illnesses. Yes, quite edgy.

Exactly how mentally ill Moon Knight is becomes part of the story, and something his non-hallucinatory allies like an ex-SHIELD agent-turned-Hollywood prop man and New Avengers cast-off Echo try to figure out while helping him. Is he, perhaps, mentally ill like a fox?

Bendis at least suggests this may be the case, when the character talks about some new techniques he’s been trying out, and it does provide some background tension…as well as at least one really weird set-piece, in which Moon Knight wears a Spider-Man costume over his Moon Knight costume and breaks into a brothel to fight hookers in his version of the Spider-Man persona (he also wears fake Wolverine claws, which he unsheathes when he goes into a fake Wolverine berserker rage during the same fight).

It’s a welcome bit of unpredictability in an otherwise somnambulistic Bendis plot. If you’ve read any half-dozen of his Marvel story arcs, you’ll recognize all of the familiar, grating tics: Everyone talks the same, as if they’re reading a spec script for a 10 p.m. hour-long cable drama, everyone has the same sense of humor, the plot is told primarily through explanatory dialogue, favorite Marvel characters and concepts get dropped in or just name-dropped, etc.

Moon Knight has moved from New York to L.A. because, as has been pointed out in a score of other Marvel comics, all the superheroes live in New York City. Moon Knight’s in town to try and stop a mysterious villain from setting himself up as the Kingpin of L.A. (It’s teased throughout that it’s someone familiar and powerful; when the final reveal is made, I must confess I have no idea who the character actually is, although he is on Wikipedia).

While there, he’s also producing a crappy television show based on the soldier-of-fortune adventures of his secret identity, Marc Spector. The star of a Bendis comic, written like a pitch for a TV series actually producing his own TV series within the comic seemed kind of clever, and in this case Bendis is definitely in on the joke, as he has a character in the show-within-the-comic melodramatically repeat one of Bendis’ most oft-mocked lines.

Maleev is particularly well-suited to drawing Bendis scripts. In a more perfect world, perhaps Maleev would be the only artist allowed to draw Bendis scripts (Well, aside from Bendis himself, although he seems to have given up professional cartooning since enlisting with Marvel).

He draws in a photorealistic style, but he does seem to be drawing in it, rather than dropping in photos. A lot of the characters look heavily photo-referenced, but expertly and organically so: I couldn’t, like, identify movie stills within the DNA of the panels, or recognize actors or models in the character designs.

The only real flourish of expressionstic, more superhero-like art is in Moon Knight’s occasionally moon-shaped, almost-luminescent white cloak, which is over long, and a nice, sharp, dramatic break with the more realistic settings and character designs.

Maleev also handles typical Bendis scenes of Person Monologueing for 1-3 pages quite well…certainly quite a bit better than many of the other artists who have drawn Bendis scripts at Marvel over the last decade. 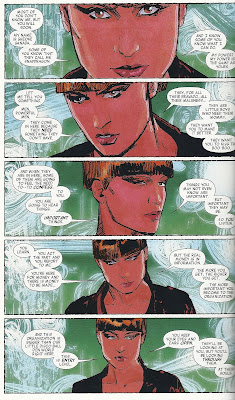 I was curious about this book prior to finding this volume, which collects the first seven issues of the monthly series, and serves as a satisfying enough chunk, resolving one mystery (the identity of the villain planning on becoming the Kingpin of L.A.) and ramping up the other (seriously, how crazy is Moon Knight?) by the end of the seventh issue.

I had noticed from Paul O’Brien’s regular analysis of Marvel’s month-to-month figure at The Beat that Moon Knight was pretty far down the chart, and moving far, far fewer copies than most Bendis-written Marvel Universe books do (in December, for example, it was #78 on the chart, and moved 24,626 units, while Avengers and New Avengers were #17/57,000-ish and #25/53,000-ish respectively).

From the contents of the first seven issues, I can’t tell why the market is less interested in this Bendis books than it is in some of his others, but it’s worth noting that even his more popular books are falling down the charts, with the X-Men retaking their traditional spot of Marvel’s top franchise from the Avengers, and DC’s “New 52” experiment dominating the top ten.

Looking at the covers for the individual issues, however, I see that Marvel was charging $4 a pop for this book, which might explain it’s relatively poor placement on the charts. I imagine even fans willing to shell out 33% more for Avengers or Spider-Man than they might if DC were publishing those books becoming more reluctant to do so when it’s a Moon Knight book. 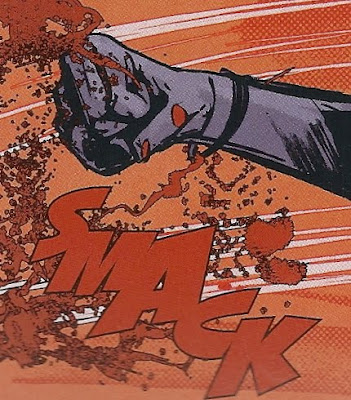 I thought this scene was really weird. It involves Marc "Moon Knight" Spector (that's him on the left) and super-martial arts expert Echo (on the right). He tries to kiss her, and does, I guess because she let him (her being a super-martial artists with wicked reflexes and what not). And then, instead of, like pushing him or slapping him, she decks him so hard that blood explodes out of his face.

And then she does it a few more times: 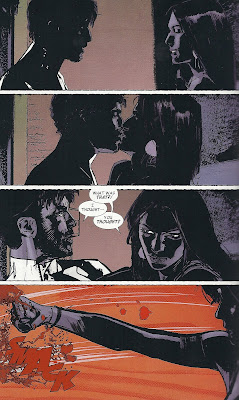 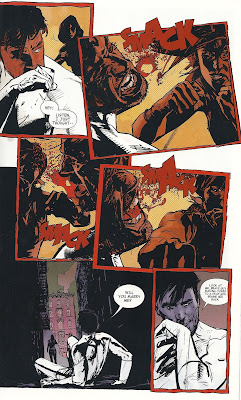 Pretty weird, right? But maybe that's what Bendis and Maleev were going for: These two people are both totally insane.

Finally, may favorite part of the whole book was the last chapter, in which the mystery villain is finally revealed (stop reading if you don't wanna know who it is, yo). Like I said, I didn't recognize him or his name, but he looks totally awesome: 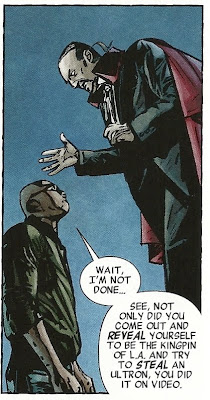 Not pictured: He totally wears a monocle, too.

Do you recognize this dude? He's apparently a Thor villain named Count Nefaria.
Posted by Caleb at 7:53 PM

You don't know who Count Nefaria is? Seriously? I mean he's no Doctor Doom but he's featured pretty heavily in quite a few big/important Marvel stories over the last 50 years and he's ridiculously powerful (did they explain why he's de-powered enough to want to just be the kingpin of La rather than the world wide boss of bosses of the mafia again and fighting Moonknight rather than all the Avengers?). Ah, man, I don't know if you're joking or not... I used to be able to tell if you were joking or not.

Ah yes, the venerable Count. He's another of Marvel's 'Supermen' like Hyperion and Blue Marvel and Gladiator and so forth (not saying this with scorn, mind; I really, seriously enjoy these homages). Neferia has the added distinction of being a Mafia Don and now a vampire. and also Superman clattered him into his smug face during the JLA/Avengers event thing.

I remember who he is primarily-- only, I guess-- from the first All-New All-Different X-Men arc after the Giant-Sized issue fight against Krakoa, in which he was the villain. Claremont's first issues; Sunfire, Havok, Polaris, and the original students except for Cyclops all quit; Thunderbird I died.

My favorite bit from those issues-- very Silver Age-y, in a Flash Facts kind of way-- is when Nefaria has blown up the X-Men's plane, they're all in free-fall, and Cyclops suggests to Nightcrawler that he teleport to the ground. Nightcrawler explains that teleporting will change his location but not his velocity, resulting in a ground-splat that much sooner.

Wow...Nefaria is really slumming at this stage of the game.

Sometimes neither can I! Nope, no joke (in this case). I honestly had no idea who Nefaria was. I've "only" been reading Marvel Comics for about 12 years, and much less intensely over the course of the last three or four as their prices went up and my wages went down. I may have read stories that reference him in that time, but none that I recall (They didn't explain why he's DE-powered, but The Avengers and Moon Knight are all aware Moon Knight's out of his league in dealing with him)

Ah yes, the venerable Count...also Superman clattered him into his smug face during the JLA/Avengers event thing

Wait, wait, wait...he's like Superman if Superman were in the mafia and also a vampire? That makes me like him even more than the fact he's just some crazy guy dressed like a World War I era aristocrat flying around L.A. blowing up Mr. Hyde and The Night Shift and running brothels...

I DID read JLA/Avengers, so I guess I have seen stories with him in it, although I don't remember him (that story did guest-star almost everyone in both the DC and Marvel Universes though, right?)

The name's a little familiar to me, but is the Count really that. . . TALL?

And yeah, the blood actually looks like sand. Weird.

I love Moon Knight as a character so much an by him no matter who is writing, so Bendis doing it should have been a huge hit as with Daredevil. Instead it moved low copies as you remark and now ends with issue 12. Sigh.

The name's a little familiar to me, but is the Count really that. . . TALL?

Ha! He's actually flying or floating, but the placement of the word balloons does make it look like he's got a normal-sized torso on top of six-foot long legs, huh? That would actually be kind of awesome...

Well, I went and checked the JLA Avengers graphic novel I got for Christmas and found him in it. He's in issue four , trading blows with Superman on the page opposite the one where the words 'And they do. They do.' appear in caption boxes. Sorry I can't be more specific, what with the complete lack of page numbers. Unfortunately, by that time he had adopted this more overtly 'superhero' type costume, one no where near as cool as the respectab;e suit he's wearing at the moment.