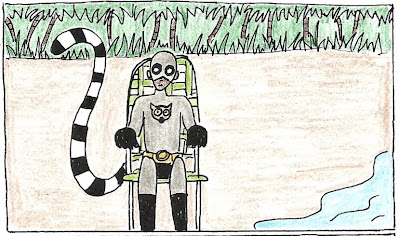 Well, there' s a story behind it.

Troy Brownfield, a former colleague at Newasrama and friend of the blog, is launching a new webcomic entitle Sparkshooter next week. Troy's writing and artist Sarah Vaughn is drawing. (The Beat has links to two relevant interviews and the teasers, so I'll direct you there instead of re-linking to all the same places.)

To celebrate the launch, Troy resurrected Shotgun Reviews, and has been posting contributions from many of those who have written for the site in the past. My contribution is "The Lemur Rises," a one-page superhero gag strip that Troy and writing partner Matt Brady scripted as a bit of a lark when they were originally planning to pitch a Batman comic or something to DC (They ended up doing a short story in Batman 80 Page Giant 2011 #1, which I reviewed here, if you're interested).

They never ended up using the strip I drew, so whoever clicks on over to Shotgun Reviews now will be among the first to see it. When they conceived it, Batman Inc was just starting and the no one outside of DC's inner circle could have conceived of the New 52 reboot. The idea was to think of a joke international Batman, and The Lemur was their pitch for the Batman of Madagascar.

I had a lot of fun making it, as I got to pretend that I was a real, big boy, grown-up comic book artist...at least for an evening or two. They had a few ideas for what a costume should look like—they wanted a Captain America-like cowl with human ears sticking out of the sides—and so I spent one night drawing different versions of a superhero costume that seemed to say both "Lemur" and "Batman of Madgascar" (which, if you've ever tried to design a lemur symbol equivalent to Batman's chest emblem, you'll know is a lot harder than it sounds). And then they sent me a full script, so I got to try my hand at drawing something someone else wrote.

It was done on a piece of eight-by-eleven inch printer paper instead of index cards, which is what I usually draw on for the little strips I post here (and used to post at Blog@), but was draw in pencil and ink pen and colored with colored pencils as per usual.

Anyway, that's a whole bunch of words about that. Check it out if you like, and bookmark the site for Sparkshooter—it should be good, as you can probably tell from the art in the teasers.

I have two posts of possible interest up at ComicsAlliance today.

The first concerns Archie Comics' latest headline-seeking storyline, in which the Occupy movement comes to Riverdale (which will feature at least one swell-looking variant cover from EDILW favorite Jill Thompson, whose renditions of the familiar characters are pretty amazing). Give it a read, and hey, good news! The comments thread below it isn't even toxic yet!

The second concerns an issue of Amazing Spider-Man shipping in May, by Mr. and Ms. Immonen—the pair answered a handful of questions about their issue, their guest-star and their collaboration. Read that too, if you like.
Posted by Caleb at 6:50 PM