I was going to note how many of Marvel's ongoing series are now double-shipping—that is, coming out twice a month instead of once a month—these days, but I see retailer and Robot 6 columnist Carla Hoffman has already done so, sparing me counting and math-doing.

Hoffman notes that there will be 19 titles shipping twice a month in September, as well as noting that there's no easily discernable pattern to which "monthlies" are now "twice-a-month-lies"; some are $2.99 books, while others are $3.99 books. Some are among the publisher's most popular titles featuring their most recognizable stars, some aren't.

Trying to make sense of the publishing decisions that Marvel, or their Distinguished Competition, make is, of course, a fool's game. So let's all be fools, and take a closer look at Marvel's solicitations for September, shall we? 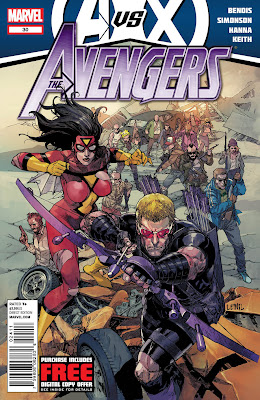 Wait, honest question time! Hawkeye and Spider-Woman have a budding romance? Isn't he married to Mockingbird? (They even had a title together for, like, four issues before it got canceled!) And didn't they make a big deal out of her coming back to life and reuniting with Hawkeye in Secret Invasion? I know that was three line-wide crossovers ago now, but it seems kind of...unromantic to be reunited with the spouse you thought you'd never see again only to break-up and move on in the space of what's gotta be only a couple months, Marvel Universe time. Or did Mockingbird die again already...?

As for Leili Yu's cover—Simonson's on interiors and they slapped a Yu cover on it?!—Spider-Woman's huge, bullet-shaped breasts look extra-weird with part of the spandex torn away, reinforcing the fact that yes, those things are actually supposed to be made out of human flesh.

And I'm kind of curious about the context, with all those civilians packing heat. I wonder if Bendis has some confused conservative political point to make in this crossover tie-in, kinda like his weird "liberal protesters don't understand the nature of Islamic evil" or whatever he was trying to say in that stupid scene in the stupid sixth issue of his stupid Secret Invasion series...

Maybe "The Only Way Real Americans Can Defend Themselves From the Tyranny of the Eternal, Cyclical Political Struggle Between Democrats (The X-Men) and Republicans (The Avengers) Is By Resorting to Second Amendment Remedies"...? I have no idea. I look forward to reading the trade collection in like two years and trying to figure out what the hell Bendis was going for, and what the hell people saw in the story in the first place. That's how I engaged the last one of these silly things I read, anyway.

So I wonder why Marvel is promoting this series with little plastic Infinity Gems giveaways, like DC did with the plastic Lantern rings that accompanied various Blackest Night tie-ins...? I might be proceeded to spend an extra dollar on yet another Avengers comic written by Brian Michael Bendis (Hey, did you know that he has three entirely different Avengers series he's writing in September? And he's writing the Ultimate version in his Ultimate Spider-Man that month too!) if I got something for that extra dollar. Like a plastic doodad. 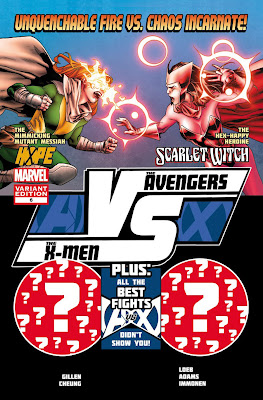 This is the cover to AVX: Vs#6 (not to be confused with AVX, although the two books have "A Vs. X" printed as the title on their covers; the "VS" is bigger in the former than it is in the latter).

I just wanted to pull this cover out to point out how much more graphically interesting and, I think, effective the question mark-filled panels on the cover are at presenting a mystery and/or concealing the identity of characters than Marvel's usual method of simply blacking the figure out.

Say, if Marvel's publishing the Busiek run on Avengers under the name Avengers Assemble, then what are they going to call the eventual collections of the current Avengers Assemble series, and how will they distinguish those from these...?


AVENGING SPIDER-MAN: MY FRIENDS CAN BEAT UP YOUR FRIENDS TPB
Written by ZEB WELLS
Penciled by JOE MADUREIRA, GREG LAND & LEINIL FRANCIS YU
Cover by JOE MADUREIRA
He’s been Amazing, he’s been Spectacular, and he’s been Sensational. Now, Spider-Man is doing a little Avenging, and he’s brought a few of his pals along for the ride. Ever the social animal, the wall-crawler has a proud tradition of fighting side-by-side with heroes from across the Marvel Universe. And now that he’s a card-carrying member of both the Avengers and the Fantastic Four, he can’t go far without swinging into a teammate or two. Step forward the rascally Red Hulk, the hotheaded Hawkeye and the legendary Captain America as Spidey bonds with Earth’s Mightiest Heroes! Collecting AVENGING SPIDER-MAN #1-5.
120 PGS./Rated T+ …$19.99

I generally like Zeb Wells' scripting quite a bit, but given the names of two of the credited artists whose work appears in this collection, I can't imagine it will be very good. Hell, it might not even be readable...at least not without great effort on the part of the reader.

That said, I thought the sub-title for the collection was funny. 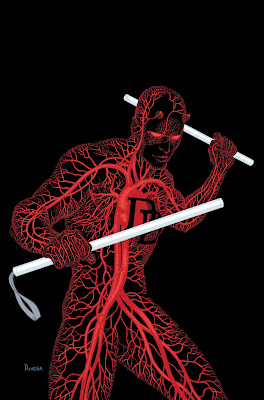 Reminder: Paolo Rivera is the best. 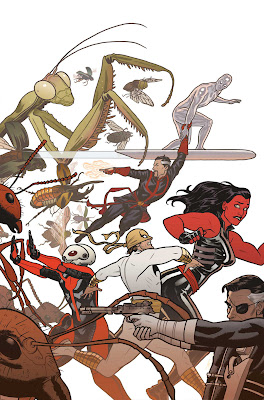 DEFENDERS #10
MATT FRACTION (w) • JAMIE McKELVIE (a)
Cover by joe quinnones
• LETS’S GET SMALL! The long-awaited arrival of ANT-MAN hits THE DEFENDERS!
• With the nature and purpose of the Concordance engines revealed, the team must act fast to SAVE EVERYTHING!
• How can you save the world when you can’t tell anyone it’s about to end?
32 PGS./Rated T+ …$3.99

Great cover by Joe Quinnones, and I bet Jamie McKelvie's interiors are neat looking, too. The fact that Marvel has the balls to charge $4 for a Defenders comic, especially given the market's long-standing resistance to embracing Defenders comics, still kinda boggles my mind.

I like Ant-Man...I assume this is the Irredeemable version of the character, in a newer, worse costume? Call me crazy, but a guy calling himself "Ant-Man" should at least look vaguely ant-like. Antennae or GTFO! 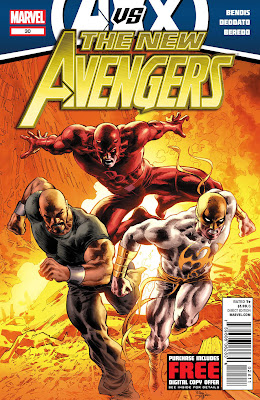 It looks like Daredevil is totally kneeing his allies in the backs of their heads in this cover, right? It's not just me? 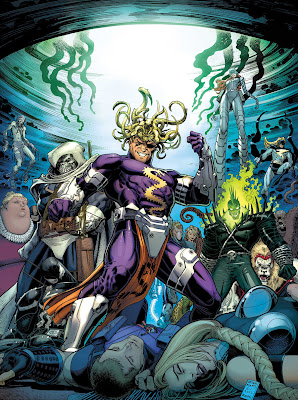 Well it's about time we got a legacy version of the late, great Stilt-Man—Stilt-Woman.

Thanks, Whoever At Marvel Made Her Up!

I can't decide if realistic-faced Griffin looks awesome or dumb. Like, it's an awesome drawing, but, as a drawing of the Marvel villain Griffin, I don't know if "as realistic as possible" is necessarily the best way to go, you know? 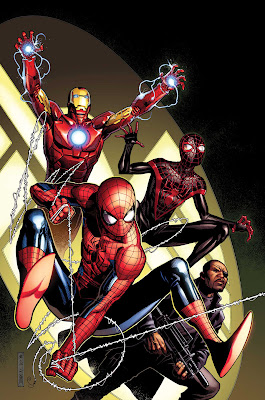 SPIDER-MEN #5 (of 5)
BRIAN MICHAEL BENDIS (w) • SARA PICHELLI (a)
Cover BY JIM CHEUNG
VARIANT COVERS BY SARA PICHELLI & TRAVIS CHAREST
• The shocking conclusion to the Spider-Man event of the year!
• How will the amazing Spider-Man get back to his own reality?
• What will both Spider-Men due now that they know they’re not alone in the universe?
• Will Peter Parker give Miles Morales his blessing?
32 PGS./Rated T+ …$3.99

Sometimes I feel bad about the constant typos that appear here on EDILW, but then I see something like the above, wherein the word "due" is used instead of "do," and I think to myself, "Well, at least I'm just doing this for my own amusement, and the occasional amusement of readers who don't have to pay a dime for it and thus get what they pay for and I'm not, like, a paid professional whose job it is to try and sell hobbyists something."

Check out that last bullet point too, "Will Peter Parker give Miles Morales his blessing?" How weird would it be if he didn't? Or if he was all like, "Well, you can keep fighting crime with your spider-powers, but only if you change your name to Black Spider-Man, or maybe The Black Spider." Now that would be a shocking conclusion to the Spider-Man event of the year.


THANOS QUEST #1
JIM STARLIN (w) • RON LIM (a)
Cover by ANDY PARK
• Thanos of Titan, the mad Eternal, has been released from Death’s domain.
• In return, he’s pledged to kill half the population of the universe using the most powerful weapons in existence: the Infinity Gems!
• If he obtains them all, Thanos will rule all he surveys!
• Collecting THANOS QUEST (1990) #1-2.
104 PGS./Rated T …$7.99

Just wanted to point out that this page-count and price point, along with the general vintage of the contents, suggests Marvel is experimenting with aping DC's DC Comics Presents almost-trades, which I loved (DC seems to be shying away from them, though; I haven't bought one in a good long while, and they seem to be solicited less and less). I wonder if it will have ads, as DC's did, or not? 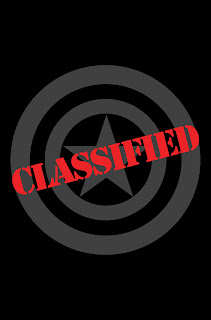 I don't think that's the way solicitations are supposed to work, guys. 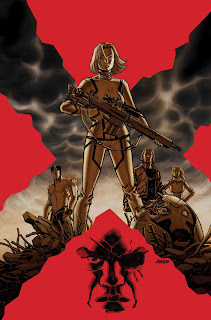 Despite the lack of kittens on Johnson's cover, I think this still wins as the best solicitation of the month, thanks to the promise of "Nick Fury's Howling Kittens."

Actually, "howling kittens" all by itself would be enough to propel this to the top of the Most Intriguing Solicitations list...


UNTOLD TALES OF PUNISHER MAX #4 (OF 5)
NATHAN EDMONSON (w) • NIC KLEIN (a/C)
• Another never-before-seen chapter in Frank Castle’s life!
• A father begs Frank to help him find his daughter who was sold into slavery.
• Frank does way more than just find the girl.
• Rising star NATHAN EDMONDSON (Who Is Jake Ellis) writes this issue.
32 PGS./Explicit Content …$3.99


Considered but rejected title for this series: Unused Inventory Stories of Punisher Max.

I admit it: I really like the sound of the name "HELL-VENOM"

I also like comics featuring Damion Hellstrom, but only the one's that were published prior to the year 1985.

Re; Hawkeye and Mockingbird.

While the status of their relationship seems to change with whoever is writing the characters, I think the official line is something like this:

MOCKINGBIRD: "With everything that went on with my life, I need some time. Let's put our relationsyhip on hold."

HAWKEYE: "FIne. While we are on hold, I'll be shagging Spider-Woman for a while."

"Reminder: Paolo Rivera is the best."
Like we`d need a reminder.

I thought that Bendis and co. wouldn`t bring ultimate Peter Psrker back. I thought wrong, and now I`m dissapointed, but not suprised at all.

She`s actually called LADY Stiltman, and she appeared for the first time a few years ago, in an issue of Amazing Spiderman (which you didn`t buy, because that issue cost 3 dollars and 99 cents).

No love for Warren Ellis' Hellstorm series? Or Kieron Gillen's use in Journey into mystery?

Please curtail the criticism of Arthur Adams. He doesn't work fast enough to sustain a monthly title, but his covers are still genius.

I've really liked Avenging Spider-Man up to this point in spite of the fact that it's 3.99. The Joe Mad issues were very fun and the Cap team up was one of the better character studies of both heroes that I can remember reading. That story in particular got a lot of critical praise. The only mediocre issue of the first five was the Hawkeye because of Land's art, but even that one had a pretty decent story from Wells. I'd recommend reading these if you like non-continuity Spidey.