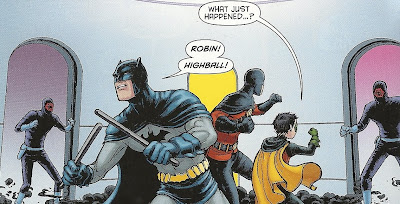 I recently read Batman, Incorporated: The Deluxe Edition, a hardcover collection of the eight issues of the Batman, Incorporated monthly series and a special that was basically two or three issues in one, written by Grant Morrison and featuring art by a generally quite talented battalion of artists. I was waiting for the cheaper trade paperback collection to finally read this series, but my local comic shop was having a 20% off sale on graphic novels, and I wasn't strong enough to resist.

In general, I enjoyed the series quite a bit, and I'll write more about it in greater detail at some point in the near future, but one thing kept nagging me while I was reading it.

Morrison continued his "Every Batman story happened" approach to Batman continuity, with a surprising amount of plot details pulled from Batman comics from the 1950s, and characters pulled from Bat-comics from the 1940s, '60s and 90s, and even early 2000s. While there are a lot of little references and allusions to "get," it's hardly necessary that you need to do so (In fact, this "Deluxe Edition" is apparently made deluxe simply by having Morrison point out all the cameos and character origins in a back-matter feature). But it is very rooted in Batman continuity, particularly that of Morrison's own creation, but he uses the entire Bat-family as it stood at the time of the series creation in the story.

It was gnawing in the back of my mind as I was reading, and sort of exploded at the climactic, cliffhanger ending, that the New 52boot has undone a lot of the characters Batman teams up with in this book.

For example, in this book, Barbara Gordon is Oracle (and a digital Batgirl fighting cyber-crime in the Internet via avatar), Stephanie Brown is Batgirl, Cassandra Cain is The Black Bat, Dick Grayson was Robin and is now (also) Batman and Tim Drake was Robin and is now Red Robin. A particular version of The Outsiders superhero team appears.

I haven't read any New 52 Bat-books yet, but I understand Gordon was apparently never Oracle, we're not sure if Stephanie Brown or Cassandra Cain ever even existed or not, so they certainly weren't Batgirl. Whheter or not Tim Drake was ever Robin seems to be something still under discussion, and depends on who you ask at DC. I know Grayson has gone back to being Nightwing...was he ever Batman? Did they explain why he went back to being Nightwing instead of Batman in the pages of his own series?

There's so much continuity referenced in this book, and a lot of it probably doesn't matter overmuch—like, whether Batman had an Ace, The Bat-Hound in the New 52iverse, or not—but it really doesn't look like it would work in a five-year timeline, and, if nothing else, few members of the supporting cast seem like they could still "work" if this were read from the perspective of The New 52, and even the villain and the villain's motivation becomes...suspect, given the reboot.

Anyway, I know the New 52 iteration just started—issue #3 is in shops this week—so maybe a lot of this isn't even clear yet, but if any of you have been reading Batman Inc and/or the other Batman titles since the reboot, I'm curious to know just how rebooted the new volume of the series is.

In the Chris Burnham-drawn image above, Batman Dick Grayson is apparently working up a thirst in the pages of last winter's Batman, Incorporated: Leviathan Strikes, and is asking his sidekick for a drink.

Batman Incorporated is so tied into the old status quo that I really wish DC just let Grant Morrison finish up the series as an "Elseworld" story set in the old universe. It might have even let Grant tell a definitive ending for that version of Batman ala "Whatever Happened to the Man of Tomorrow?"

On the other hand, thinking about how Batman Incorporated fits into the "New 52" continuity just makes my head hurt.

More or less, Morrison is pretty much continuing where he left off. The New 52 costumes in flashbacks are the only thing that's really changed. I have a feeling that he just won't bring up Oracle, Stephanie, and the other niggling continuity points, but he won't outright contradict them either.

Still, in the first issue, he referenced the events of the first issue of his JLA, which, according to Geoff Johns, could never have happened, since the League has never had a fluctuating roster. So yeah, Morrison seems to not give a damn, which is very refreshing for those of us who loved his "everything happened" vision.

I prefer this to anything in the new 52-niverse.
Though I thought Barbara Gordon still was Oracle for a time in new continuity? I know she was in the wheelchair for several years, still. It's depressing to think that she wasn't Oracle, if that's the case. I haven't been following that closely, because most of these titles suck.
Fucking reboots.

I've had it explained to me that Batman is the only property that wasn't rebooted in the New 52. Yes, it restarted with issue #1 just like all the other DC books last September, but the continuity is still intact from the Old 52.

Thus, Barbara Gordon still spent a few years as Oracle when she was confined to a wheelchair. But she got better and now she's back to being Batgirl again.

The first few pages of The Return of Bruce Wayne #6 are key. The timeline starts over, but Batman's personal history is preserved and retained - on panel. If we're willing to read between the lines, Morrison told us what he thinks of the reboot before it even happened.

Yes, as others have said, Morrison seems to be ignoring any implications of the reboot or shortened timeline. Stephanie, Cassandra, and Oracle have so far been absent, but the Outsiders seen in Leviathan Strikes are definitely still part of the story, Dick was definitely Batman for a while, and Tim was definitely Robin. There was even a flashback to the Infinite Crisis era Secret Society in issue 2, including an appearance by Black Adam that seems at odds with his appearance in Justice League. I saw some speculation on Comics Alliance that issue 2 implied that Damian was artificially aged (which would explain how Batman could have a ten year old son with only 5 years of super-heroing) but I did not get that impression from reading the issue. I think Morrison is plodding along, telling the story he wanted to tell, and DC is letting him, which is how I hope it continues.

Honestly, because DC didn't do a reset on Batman and Green Lantern's continuity, letting some stories stand and other's go....things are kind of a mess. I love Morrison but its clear he kind of doesn't care about this New 52 too much in regards to Batman, and is going to do whatever he wants--which is good because I don't want a re-boot harming Batman Inc. too much. DC has claimed they have some wall in their offices which lays out what stories did still happen and which didn't, but they sadly won't share it with us. So is life.