Let's talk at some length about Batman: Earth One 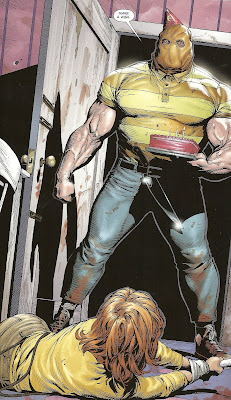 Hey look, it's "The Birthday Boy," the brand-new, original villain that writer Geoff Johns and pencil artist Gary Frank created during the course of their very, very strange Batman: Earth One graphic novel, which is maybe kinda sorta supposed to be a more realistic take on Batman for a new generation...?

I'm not sure what they were going for with the project, to be honest, and what they ended up with is a pretty terrible comic book about how Batman sucks and about how torture, gun violence and lethal force are the only way to beat the bad guys, featuring highly competent but remarkably unremarkable artwork for such an out-of-left-field Batman project.

Here, I reviewed it at Robot 6, if you'd like to read a more thorough (but spoiler-filled!) review of of the original graphic novel (For alternate, superior reviews, I'd re-recommend Sean T. Collins' The Comics Journal review, which couches criticism of the work within a framing device taking up the various "What the hell is this thing, and why is this thing?" aspects of the project, as well as Tom Bondurant's more straight, upbeat and spoiler-free review for Robot 6).

There were a few other things I think worth pointing out, even if they didn't fit in a proper review. I will number them.

1.) First and foremost, look at this lady's breasts: 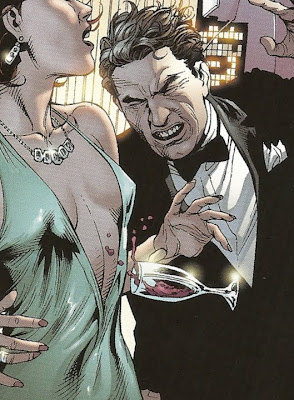 They appear as part of a two-page splash in which Batman, on what seems to be his second night on the job, accidentally crashes through a large glass window and into a gala party thrown by Mayor Oswald Cobblepot.

Frank and inker Jonathan Sibal (who, for some reason, didn't get his name on the cover along with Johns and Frank) just drew the hell out of those breasts, didn't they? Even the colorist did maybe the best work of the volume on her breasts.

They are also, refreshingly, not the exact same size and shape as all of the other breasts in the book. This particular splash page has a good half-dozen pairs of breasts in it, on the young and old, stuffed into revealing evening gowns, and yet Frank manages to draw several different sizes and shapes of breasts throughout the book. Good job, Gary Frank! (If you don't read many superhero comics, let me assure you that this is actually very, very rare within the genre).

This image of this lady's breasts is by far the best part of Batman: Earth One and, after that page passes, it's all downhill.

And what was she wearing in The Killing Joke? 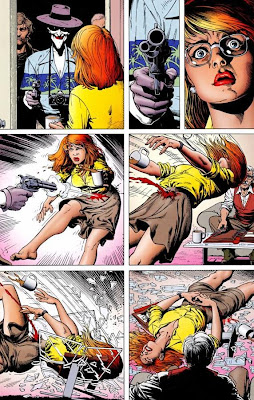 Yellow. Basically Barbara Gordon should stay away from yellow, is what I'm saying.

3.) One of the most shocking moments in the book was a throwaway line in a single panel. Check it out: 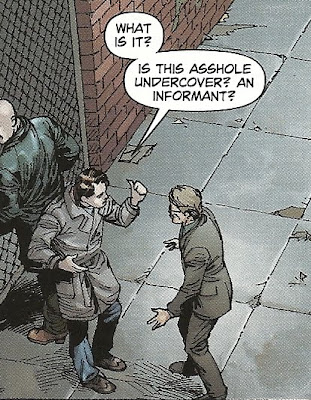 He said "asshole"! In a Batman comic! Can they do that, without the stupid "@#$%" or a black redaction bar or something...? That's crazy. I've seen Johns use "the A-word" in his superhero comics before, but I'm having trouble thinking of an occassion where it was the compound word "asshole." I'm sure it must have happened in some Batman comic at some point before, probably one written by Frank Miller, but I can't think of an example off the top of my head.

I'm fine with it, of course. It's actually one of the least offensive things in the book. I'm just surprised at all, given how Johns and DC usually use extreme gore, violence and allusions to sexual violence to give their juvenalia the patina of maturity, eschewing nudity and PG-13 language. And Marvel Comics goes to great, stupid lengths to have their characters swearing like sailors all the time wihout ever actually printing a swear word on the page.

This particular book, if you're wondering, isn't rated. Or, if it is, I didn't see the rating on it, but maybe I didn't look hard enough.

3.5) Did they use the word "asshole" in any of the Nolan movies...? I can't remember hearing any swearing in any of them, but I haven't rewatched the first two since they were in theaters, and I'm even a few weeks removed from having seen Dark Knight Rises at this point, meaning I remember very little dialogue not spoken by Bane (except for Batman's "Where's the DETONATOR?!" freak out, which recalled Nicolas Cage's "How'd it get burned?" dialogue in The Wikcer Man, only much, much louder and phone sex operator-esque)

4.) I kind of liked how Lucius Fox was portrayed in this, as Batman's gadget man and own personal Q, just as he was in the Nolan films, only here he's a much younger man, and thus doesn't have the fatherly relationship with Bruce Wayne that Morgan Freeman's portrayal of the character did.

I like that version of Fox in general, mostly because it gives the character some agency, rather than just being the guy Bruce Wayne has to talk to when someone decides to do a story involving Wayne's business life or finances.

I haven't read any of the post-New 52boot Batman comics yet (I'm trade-waiting a couple), but I do hope they made comics Fox more like movie Fox. If you're going to reboot the DCU, you might as well adopt what works best about the characters in other media, right? Especially the other media products that are almost universally embraced? (Of course, comparing the "New 52" comics to the DC characters that have appeared in the many successful cartoons from Batman: The Animated Series to Young Justice, it's pretty clear the guys making DC's pre-New 52 comics weren't exactly looking outside of their medium for inspiration on making more widely appealing versions of the characters).

5.) For the life of me I can't fathom why DC decided to push this particular book the week Dark Knight Rises came out with all those free preview comics, as it is so radically divorced from the "real" Batman of all those other Batman comics DC publishes every single month and from the Batman in the movies. If the idea was to introduce readers to Batman, they might as well have handed out free reprints of Batman: Year 100 #1 or All-Star Batman and Robin, The Boy Wonder #1 or Batman: Dark Knight of the Round Table #1. Hell, any of those at least get the bit about Batman being a basically stand-up guy who wants justice and has a strict code of conduct that forbids him from shooting The Penguin out of a window with a big-ass shotgun.

I suppose it has something to do with them wanting to tempt folks into buying the very expensive trade instead of a $3 or $4 pamphlet (Although, why not the first chapter of Batman: Year One, or something with Bane or Catwoman in it), and/or to give Chief Creative Officer Geoff Johns a huge promotional push he doesn't really need, but it seems like trying to sell the "real" Batman who stars in a good half-dozen New 52 monthlies would have been a better way to go.
Posted by Caleb at 9:08 PM

Solid call, Caleb. The yellow in that pic is specifically intended to evoke TKJ... yet one more reason I'm well & truly put off by Johns and what he's come to represent vis-a-vis DC.

[ Apologies in advance for the rant, JC. Feel free to delete if it's OT. ]

Moore's treatment of Babs was grotesque, and I suspect he to some extent regrets it... not because he's squeamish in employing such tactics, but because in the instance of 'The Killing Joke', Babs was victimized purely as a plot device. TKJ eschewed her story in favor of what her victimization meant to the men surrounding her. Moore's admitted that it's a slim thing, barely worth an annual, and certainly his least favorite work-- probably due to the weak, sexist schlock underpinning an otherwise interesting tale.

Point being, Moore's treatment got a pass because it came at a time in which sexual violence wasn't as casually capitalized on in comics as it is today. "These things happen," yes, but the way in which Johns has chosen to exploit them as a selling point-- as part of his 'style', ugh --seems callow and crass. In my eyes, that scene with Babs and Birthday Boy is a direct shout-out to BS even Moore is embarrassed by.

Of course it's not just Johns; DC's tactics have had me puking in my mouth ever since the casual slaughter of Alex Dewitt, followed by Sue Dibney and Stephanie Brown. When we joke about our childhood being raped, it's not euphemistic anymore. Fictional though they may be, these women were part of the formative landscape of my childhood and early teens. To see how they've been treated through the years disgusts me, and Didio doesn't earn the company a pass for resurrecting Steph because her murder should've been vetoed by editorial to begin with. There was no excuse for it aside from the desire to exploit the readership in the hope of moving a few more units; overmore, there's no excuse for us supporting DC by buying this kind of crap.

TL;DR: While sexual assault should not be ignored as a topic, it's tawdry as all hell for writers to keep coming back to these perils of Pauline scenarios. If you're going to reduce yourself to cribbing from giallo, DC, at least take a surface-level cue from Hostel & reverse the roles once in a while. And I don't mean Joker cutting off his own face.

Johns has never really "got" Batman. He's admitted as much himself, which makes him a bizarre choice to put on this book.

That scene with Barbara is actually the reverse of The Killing Joke. Barbara helps save herself, and the event inspires her to become Batgirl, instead of forcing her to stop.

So I doubt the visual "shout out" was intended as approval of what The Killing Joke did to Barbara.