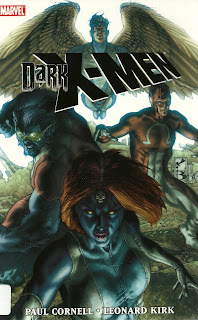 I'm not quite sure I understand how exactly this particular comic book mini-series would have worked, or if it worked as it was originally published in 2010, as part of the big, Marvel Universe shared mega-narrative of the time.

This was the post-Secret Invasion, pre-Siege era in which the president of the United States had decided that former supervillain and mentally-ill convicted murderer Norman Osborn should replace Tony "Iron Man" Stark as the Marvel United States of America's official Boss of All The Superheroes, apparently based on the fact that Osborn managed to shoot the queen of an invading alien army in the head before Iron Man could shoot her in the head. That's how presidential appointments work, in Marvel's United States. There, Donald Rumsfeld was made Bush's Secretary of Defense based solely on the fact that he was the first candidate for the job to score a head-shot during a supervillain attack on Bush/Cheney campaign headquarters during the 2000 campaign.

Anyway, the state of the X-Men at this point in Marvel recent history was a little weird–they were magically whittled down to just 200 mutants, and most of them moved onto a little island off the coast of San Francisco that they declared the sovereign nation of Utopia, which is just asking for trouble (I woulda went with "San FranXo").

Osborn, being a villain, hired a bunch of villains to dress up as The Avengers in a book called Dark Avengers, using them as his own personal version of the Marvel Universe's premier super-team. This is Dark X-Men, and the premise is therefore quite similar—Osborn-approved bad mutants masquerading as good mutants—but since the X-Men play such a different role in Marvel society, there doesn't really seem to be any reason for Osborn to need/want a team of his own.

So I had a hard time wrapping my head around this book's very existence, and thus really appreciate what a decent job writer Paul Cornell did of making a self-contained, super-people drama out of it, one more focused on a collection of bad, broken people trying to meet their own goals. Also, he kinda sorta makes it all about Osborn, rather than The X-Men (Dark, Uncanny, Astonishing, Legacy-having or otherwise), so that it seems to be a thread of the the whole "Dark Reign" tapestry of post-Secret Invasion, pre-Siege Marvel stories.

His X-Men, seen on the cover as depicted by former Astonishing X-Men artist Simone Bianchi, are Mimic (who actually looks like original X-Man Angel), Dark Beast (who is apparently just like regular Beast, but evil), Mystique (who shape-shifts to resemble Jean Grey when in public) and Omega (who I think is maybe from an "Alpha Flight" story, and was maybe introduced in that one Brian Michael Bendis issue of an Avengers comic which spent some eight pages, mostly splash pages, visually describing a town in Alaska blowing up or something).

Cornell, working with his Captain Britain and MI:13 partner Leonard Kirk (and Jay Leisten, who inked 3/5ths of the book) introduces the characters in each issue with a little box listing their name and a song title to describe them, which is either clever/cute or annoying, depending on if you get the references, and/or care to think about the ways in which Nathan Grey, the shirtless mutant messiah who used to star in a book called X-Man is like a particular Rolling Stones song).

Cornell portrays Mimic and Omega as basically decent but screwed-up people trying to do the right thing more often than the wrong thing, but aren't quite in control of their enormous powers and lacking something upstairs or in their hearts. The Dark Beast is an unrepentant psychopath, although there's a kinda clever gimmick to the way Cornell rights him, as post-human sentient who regards human beings the way too many human beings regard animals (the blatancy of his name and appearance form nice, bombastic underlines and exclamation points).

In the course of their duties as Osborn's own personal mutant-focused super-team, they stumble upon Grey, whose backstory I don't know/get at all, but apparently he's some kind of pure energy, nigh-omnipotent future mutant with the potential to do a lot of good for the world, including the bad-to-worse members of the "Dark X-Men," and he attempts to do it by hijacking Norman Osborn's brain, which leads to a weird little adventure inside Osborn's mind involving the title characters, Grey, Osborn and The Green Goblin.

It's a down ending of course, because it's part of a mega-narrative with the word "Dark" right there in the branding, and because the happy ending has to be saved for the Brian Michael Bendis conceived and executed Siege storyline that undoes this status quo, but it's a decent character study of Osborn and, to a lesser extent, the minor characters given a spotlight in the title.

The real stars though are Cornell, whose writing is sharp, clever and imaginative, and Kirk, whose art is smooth, clear and clean, building settings and characters that feel organically linked and occasionally calling to mind the superhero art of Stuart Immonen.

I don't really like X-Men comics, and I don't really know much of anything about any of the characters running around the pages of this book, but I kinda liked this anyway, which I assume is thanks to the great care and craft that went into making it, and Cornell and Kirk's ability to take apathy-inducing source material and make something interesting out of it.
Posted by Caleb at 7:13 PM

I have a weird love for Nate Grey so the fact that this comic brought him back from his sorta-death some years ago made me very happy--even if it was sad how it ended. I didn't mind the sad ending because Grey popped up again in New Mutants. Where he will be next I can only imagine, but I'll probably follow. Luke Cage, Moon Knight, and Nate Grey I will follow almost anywhere. I just couldn't do the Bendis Avenger books even if they had Cage though. It just got so bad.