Despite the title, the three-issue World War Hulk: X-Men miniseries only accounts for the first 66 pages of this 240-page trade paperback. Also included are two issues apiece of Avengers: The Initiative, Ghost Rider and Iron Man, with one issue of The Irredeemable Ant-Man. Each of these tied into the "World War Hulk" event/story, and are supposedly not alluded to at all in the title of the collection for the same reason they put Wolverine on the cover instead of the rest of the X-Men. It's what they think will sell the most volumes.

If you've never read it, World War Hulk was a 2007 five-issue crossover miniseries that pitted a righteously angry Hulk versus Civil War heavies Iron Man and Reed Richards, plus Blackbolt, Dr. Strange and the rest of the Marvel Universe, who wanted to keep the Hulk and his army of space-alien invaders from wrecking the world in their pursuit of the Iron Man. While it was plotted by group-think, with the Brian Michael Bendis-invented "Illuminati" getting the ball rolling a few years ahead of time, it was written by Greg Pak and drawn by John Romita Jr and Klaus Janson.

Unlike the similarly-sized Marvel crossovers that preceded (and followed) it, World War Hulk was pretty straightforward: Everyone fights the Hulk, although it was given a little more dramatic complexity by the fact that the guys he wanted to punish totally deserved it. After Civil War, who didn't want to see Iron Man and Reed Richards get their faces punched in? Also unlike the other Marvel event series, this one featured characters who acted like themselves, and thus much of it rang true.

This collection if basically just a big handful of the many tie-in series, seemingly chosen at random, and the stories themselves are fairly repetitive. In each one, the title characters fight the Hulk without defeating him; each ends either in a draw or the Hulk victorious, as the real story was of course occurring in World War Hulk itself, not some random issue of the tertiary Avengers book or an Ant-Man comic, and any and all major, dramatic beats would necessarily have to occur there.

I read three of these issues before, and talked about them before, so I won't talk abou them again here (Irredeemable Ant-Man in this column, if you wanna read what I had to say about it when it first came out, and the two Avengers: The Initiative books...aw, I don't feel like looking 'em up. There on the blog somewhere in some 2007-era editions of "Weekly Haul").

The sub-titular story is by writer Christos Gage and artist Andrew Divito, both of whom are pretty great at these sorts of superhero comics.

Gage has to engage into some labored set-ups to even involve the X-Men. Because Charles Xavier sometimes hung out with "The Illuminati" group that decided to shoot The Hulk into outerspace, the thing he's so damn mad about that he's returned for vengeance, The Hulk wants to track down Chuck and ask him how he would have voted on the issue of shooting Hulk into space, and punish him for it if he says he would have said yes.

Charlie could have always just said, "Oh no way Hulk, I totally would have voted to not shoot you into space," at which point the Hulk would go away, but, well, that wouldn't fill 66-pages with fighting.

And so after invading Manhattan and issuing an ultimatum to the world that they deliver Iron Man, Richards and Dr. Strange, The Hulk goes on a side trip to X-Men HQ in Westchester. He fights The Beast and the "New X-Men" characters for one issue—these are the new, teenaged heroes who go to school at the Xavier Institute—in order to get at Chuck (Who does offer to surrender, but the kids won't let him). Then, in issue two, the real X-Men swoop in to fight the Hulk—these are the guys who were then starring in Astonishing X-Men; you know, Cyclops, Wolverine, Colossus, Kitty Pryde and Emma Frost. The Hulk beats them all up, too.

Finally, the other X-Teams all come in to try and help out, so we get one more issue of The Hulk fighting the cast of X-Factor, The Juggernaut, Nightcrawler, Native American Stereotype Man and that space-cat lady someone at The Beat really likes for some reason. The Hulk wins, but is ultimately shamed into just going back to the Manhattan to continue with the plot of World War Hulk after he's shown a graveyard full of dead mutant kids.

As fight comics go, it's about as pure as you can get. Highlights, for me, included The Hulk throwing one character's limbs into Connecticut, punting another character to New Jersey, and removing some special Vibranium knives from his arms simply by flexing really hard and making them pop out. 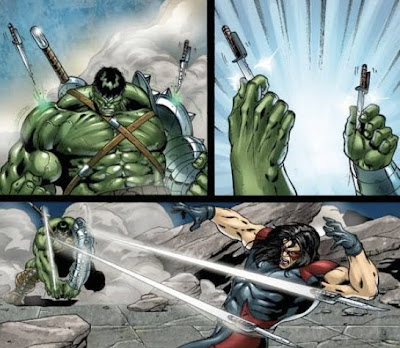 The artwork looks particularly gorgeous when read in 2012, as Marvel's coloring hadn't gotten as computer effect-dominated at that point as it has today.

Daniel Way, Javier Salteres and Scott Hanna's Ghost Rider story is a fairly standard one about a human host wrestling for control with the parasitic spirit of vengeance housed in his body (well, standard for superhero comics, anyway). The Ghost Rider wants to continue chasing a demon or whatever from the previous issues of Ghost Rider (not collected here), while Johnny Blaze wants to use the Ghost Rider's powers to stop The Hulk.

They fight in a big, splashy brawl of the sort only The Hulk and a flaming skeleton demon thing on a flaming motorcycle can. Ghostie uses the Brooklyn Bridge as a ramp to fly into town and drops a building on The Hulk; The Hulk retaliates by throwing a subway car at him and then jumping off the top of the Empire State Building and landing on him. Eventually, the Ghost Rider takes control of Blaze, and rides away from the crossover and back to his own title.

The artwork is again quite nice, although the computer flame effects are a bit much, distracting from the otherwise very drawn, very comic book-y look of the illustrations. Salteres' Hulk looks especially human scaled and even handsome compared to the more gigantic, monstrous Hulk we see in the other stories, which is also a little on the distracting side. With five different artists—more if you count cover artists like Ed McGuinness—no two Hulks look a like in this book.

Finally, Gage and artist Butch Guice provide the Iron Man issues, which span a time period that begins before the other stories that precede it in this collection and ends after them. Since Iron Man is, at this point, Boss Of All The Superheroes and Hulk's target, this story should be the most important in this collection—it's certainly the most relevant one to the events of World War Hulk, so it's rather surprising to find it at the end of the collection, a collection which doesn't even mention Iron Man, but whose sub-title and cover makes it appear that this is simply a collection of a single miniseries.

At this point in the Marvel Universe, Iron Man was something of a high-tech, superhero-flavored espionage series, and this story is mainly concerned with how SHIELD responds to their director Tony Stark flying off to fight Hulk, and what they do when Stark is taken down and captured. It's serious in tone, much more so than the light-hearted, almost-silly X-Men mini also written by Gage, and Guice's realistic art is perfectly appropriate for that focus.

And that's that. As a collection, it's a real quilt of characters, art styles and storytelling, and the presentation's a bit of a head-scratcher, but it's not a bad batch of old-school fight comics, and none of the art is bad, nor any of the stories poorly-written.

It's been about five years since I first read that Ant-Man issue and was perplexed by all the Old Spice product placement (Old Spice billboards fall in the fighting, a shrunken Ant-Man finds bottles of Old Spice body wash in The Hulk's stomach for some reason), and it's still super-weird to me.
Posted by Caleb at 8:42 PM

>...perplexed by all the Old Spice product placement...

The creators had been told there would be Old Spice product placement in that issue; they decided to ramp it up to ridiculous levels by plastering Old Spice ads all over the book for comedic effect.