Wow, it's Monday night already...? So I've been sitting on these books for, let's see, five days now. I must have been awfully busy over the course of the last five days. Which is weird, because it sure doesn't seem like I've accomplished much of anything. Anyway! Some comics released on the last two Wednesdays that I purchased from my local comic shop, along with what I thought of 'em, below!

Daredevil #16 (Marvel Entertainment) This issue is divided rather neatly into two parts. The first deals with Tony Stark, Dr. Strange and Night Nurse helping a very shrunken Hank Pym operate on Daredevil's brain by wandering around it, shooting the nanomites in it with a huge (well, relative to his microscopic size) gun. The second deals with the fall-out of Foggy Nelson finding something weird in Matt Murdock's drawer, and suspecting it is weird enough to prove Matt is 100%, certifiably cuckoo for coco puffs (to use the medical term), and then proceeding to kick him out of their law firm.

One of the best Ant-Man and Wasp comics I ever read was the issue of The Mighty Thor they guest-starred in that Samnee illustrated, so it was nice to see him drawing them, even just briefly, here.

It's sometimes depressing how good this comic is, because it shouldn't be special. Great, imaginative writer and great, imaginative artist brining their A-game to the decades-old Marvel formula of superheroes and soap opera that. It's a shame this stands out as so exceptional, because it puts underscores just how bad almost everything else is these days.

Hawkeye #1 (Marvel) I was mildly interested in this book due to the creative team (Matt Fraction and David Aja's first few issues of Iron Fist were pretty dynamite) and the wonderful covers, but I was mildly interested in a wait-for-the-trade-which-I-may-or-may-not-actually-ever-get-to kind of way. I was in the shop the week it came out though, and there was only, like, one (1) other comic that I wanted to buy, so, seeing it was only $2.99, I grabbed it—total impulse buy ($2.99 is a more attractive cover price for impulse buys than $3.99 by the way, Marvel).

It's a very good, done-in-one, self-contained and complete modern action-adventure comic book, rather like what Marvel has been producing with Daredevil, save without any of the fantastic signifiers of that particular character and franchise, and with a bit less personal personality in the artwork.

For some reason, Aja decided to draw it in the style of David Mazzucchelli...or at least Mazzucchelli's style from his seminal Daredevil run and, more immediately, his Batman: Year One, which the narration and captions further call attention to. It's a good Mazzucchelli impression, but for the life of me, I don't see why he's doing it at all.

Another odd choice is in how generic a character Hawkeye is. He's a nobody, really, defined no further than maybe kind of a smart-ass, kind of immature for a superhero, interested in doing the right thing. This could be a comic book about, well, almost anyone (well, at least almost any superhero; it wouldn't work as well if it was about me, or Tom Brevoort, or your mom, or Congressman Paul Ryan). Hawkeye doesn't even wear his costume in it at all, save for in the first five panels of the book (and his new, post-movie costume, at least as rendered by Aja, is simply a black T-shirt with a vague arrowhead shape on it, and purple-tinted sunglasses). And he doesn't use a bow and arrow at all, save for in the very first panel.

Rather, he demonstrates his powers or skills by having really, really good aim, like Ultimate Hawkeye, who stole that from Roy "Arsenal" Harper, who stole it, I believe, from Bullseye (And we're back to 1980s Daredevil again!)

Beyond the pleasures of Fraction's well-realized craft and Aja's great, if weirdly modulated to Mazz's frequency, artwork, it's also a pretty funny comic.

I like the fact that although he doesn't wear his costume, when in street clothes, Hawkeye is always wearing purple: A purple t-shirt and Converse All-Stars when leaving the hospital, a purple tie with his suit when he infiltrates a gangster-run poker club. It reminded me of Mighty Morphin' Power Rangers, how the various Rangers would always wear only the colors of their uniforms when in street clothes, so that the Red Ranger was always wearing red T-shirts and jackets and shoes, The Pink Ranger was always in pink, and so on.

Also, the bad guy says "bro," like, constantly. I thought that was a funny tick, well executed.

Oh, but I thought this one scene was really weird: 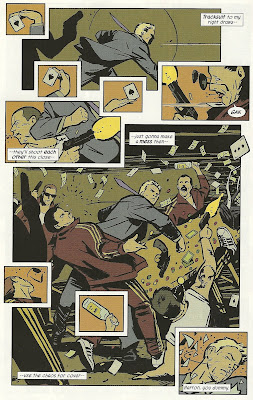 If you get hit in the throat by a playing card thrown by "the greatest sharp-shooter known to man," is the result a paper cut that is also a mortal wound? Or does it just stun you?

I have no idea, having never seen that in real life. Like, I think I've seen The Joker kill people like that, but I think he also had trick cards with razor-edges.

Anyway, I know Brian Michael Bendis has written Hawkeye to be driven to genocidal mania in the past, during Secret Invasion, 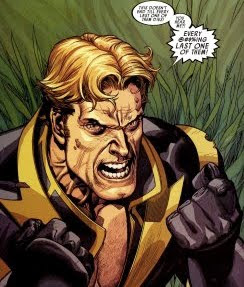 an epic story whose prelude included Mr. Fantastic, Iron Man and their Illuminati pals slaughtering thousands of Skrulls, but I'm not sure what the Avengers rule book says about killing dudes, or if that dude who got hit with a card even died.

The Lake Erie Monster #2 (Shiner Comics Group) It's the latest installment of Clevelanders J. Kelly and John G's self-published local horror anthology (the first issue of which I reviewed here),a big, thick comic that stinks of ink and is packed with the pair's commissioned ads for cool local businesses, that it kinda sorta functions as a visitor's guide to town (for example, while I can't second all of the businesses advertising, I can definitely recommend the music venues who are advertising in this issue).

In this installment, there's the second-part of the title story, in which several of the characters begin to figure out that there may be a monster involved in the various pet-killings and disappearances, a few kids stumble upon where the monster might be making its home (hey, it's a semi-famous local landmark!) and we readers get a pretty good look at the monster itself. 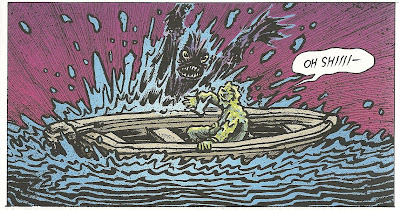 The back-up story is "Greens," in which some hipster college girl and her roommates encounter a horror brought home from a farmer's market. It may be in large part because of the character design and inking, but the art on this one reminded me of Daniel Clowes drawing an EC horror short and that...well, that's something to see. 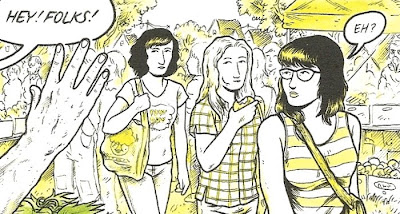 The "Commodore's Cleveland" installment lacked hobos, Bigfoot and a hobo Bigfoot, so it wasn't as storng as that in the first issue. 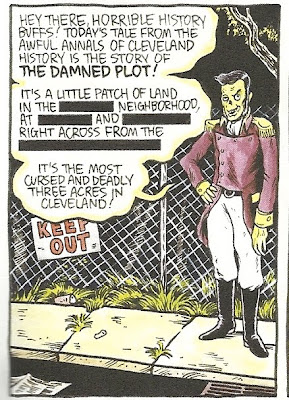 There's a clever gag featuring redaction marks, but otherwise, it lacks the immediacy and vague truthiness of the first one.

Spongebob Comics #11 (United Plankton Pictures) There are particularly strong installments of regular features like the pirate-themed credits page (this one about the dangers of "book barnacles," and how to keep your comics clean of 'em) and James Kochalka's strips (this time, it's "How To Not Draw SpongeBob). Of the four longer stories that make up the rest of the comic, including a particularly funny one in which Patrick keeps a Diary of a Wimpy Kid style of Squidward's activities by totally stalking him, the strongest is probably Graham Annable's "The Big Cover-Up!", in which a late-for-work SpongeBob doesn't realize he forgot to put on pants until he gets to work and, rather than return home, he manages to get through an entire work day without anyone noticing he's in his underwear. 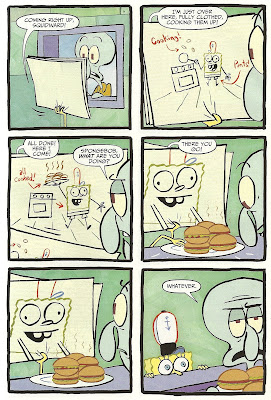 And that's all I got the last two Wednesdays.


Why on earth didn't you read that awesome-looking Godzilla comic by James Stokoe, one of your favorite artists? you may ask. I answer: Because it is $4 instead of $3 or $3.50, and I am poor. What about It Girl and The Atomics, or Beasts of Burden?, you may further ask. My shop didn't receive any pre-orders at all for the former, and thus didn't rack it (not a great sign for that book!), and sold out of the few rack copies of the latter. Maybe I'll get to those next week.
Posted by Caleb at 10:10 PM

According to Wikipedia, stage magician Ricky Jay can throw a playing card hard enough to embed in the rind of a watermelon.

I prefer to think Hawkeye just jabbed the throat enough to cause a choking fit.

Best overuse of redaction is probably the SCP wiki. If you've never read it, it's a collection of various creepy stories in a kind of Warehouse 23 fashion.

Mythbusters did an episode on whether you could kill someone with a playing card (which referenced magician Ricky Jay). Ultimately, they determined it was impossible to kill someone, but that you could draw blood.

Of course this is the Marvel Universe, where Bullseye famously maimed Electra with thrown playing card before running her through with her own sai. So maybe playing cards in the MU are made of sturdier stuff?