I had a blast reading through this month's release of Marvel Entertainment's plans for November releases, because of the way in which they employed the "Marvel NOW!" branding throughout.

See, Marvel's retaliation plan to DC's inspired idea to put an unprecedented PR push behind a complete reboot of their entire universe, renumbering of their entire DCU line and the shuffling of their creative teams was to do the same thing, only without the reboot. And, instead of calling it "The New 52," they would be calling it "Marvel NOW!" with an all-caps "now" that in our post-Internet age of course reads like a shout.

And so, sprinkled throughout their solicits of the word "now," only it must always be capitalized, and with an explanation point.

So, for example, you get a lot of sentences like, "NOW! in the aftermath of Avengers vs. X-Men, Legion will finally attempt to conquer his demons and embrace his father’s legacy!" and "NOW! the Mighty Thor follows a trail of blood that threatens to consume his past, present and future selves," and so on. 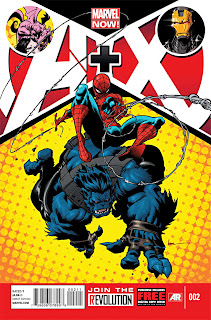 My favorite artist? Cool; I'd love to see a Kelley Jones version of the Brood!

I like the logo and the silliness of the title, and I love Kaare Andrews' art.

That said, this is $4. This is one of the books on sale this month that I would read for $2.99, but won't read for $3.99. There will be a lot of them. I wonder if I'm uniquely stubborn and cheap, or if Marvel fails to sell a lot of comics because of their pricing. I'm sure they make more than they lose though, at least in the short term though, or else they wouldn't keep launching $4/20-22-page books.


All-New X-Men #1 
BRIAN MICHAEL BENDIS (W) STUARD IMMONEN (A&C)
...
It’s a blast from the past as the original five students of Professor X – Cyclops, Marvel Girl, Iceman, Angel and Beast – are plucked from the past and brought to the present. But what they find, the state that their future selves are in and the state of Xavier’s dream, is far from the future they dreamed of. And how will the X-Men of the present deal with their past coming crashing forward?
32 PGS. (EACH)/Rated T+ …$3.99 (EACH)

I'm sure someone, maybe everyone, has already mentioned this, but the premise of this series seems really, really, really, really familiar. Like, I think they've done multiple Legion series which was like this in reverse. I know Ron Marz wrote a Green Lantern story like this featuring Hal Jordan, back when he was still dead. Kurt Busiek played with a similar concept in parts of his Avengers/JLA crossover story. Mark Waid did something similar with the Barry Allen version of Flash (when he was still dead), although there was a twist...at Marvel, between Civil War and Secret Invasion they did this with the Captain Marvel character, although that too ended up being a twist.

I can't imagine what will make this all that different then, save that the characters will all talk like Brian Michael Bendis, and probably act nothing like themselves. The art should be pretty though. 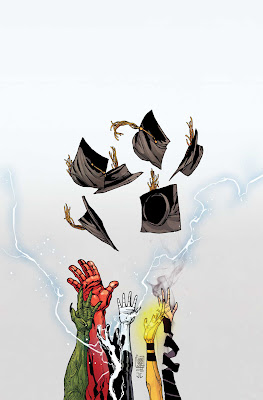 That's the final cover for Avengers Academy, which is being cancelled. It's a pretty effective cover, I think. 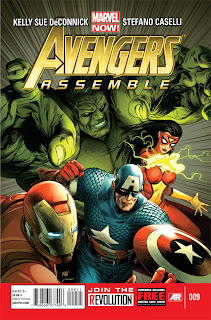 AVENGERS ASSEMBLE #9
KELLY SUE DECONNICK (W) • STEFANO CASELLI (A)
Cover BY STEVE MCNIVEN
...
ALL-NEW CREATIVE TEAM WITH ALL-NEW OUTSIZED ADVENTURES!
• Kelly Sue Deconnick (CAPTAIN MARVEL) and Stefano Caselli (AMAZING SPIDER-MAN) team up to tackle the titanic tales YOU DEMANDED! And in continuity to boot?!
• Two scientists. Two giant egos. One wears a tank. One is a tank. Tony Stark and Bruce Banner are SCIENCE BROS!
• When a fellow bigbrain goes missing, wanna bet who can find him first? It’s Amazing Race, Avengers-style, as Iron Man and Hulk form their teams and embark on a global manhunt with the ultimate prize at stake…bragging rights!
32 PGS./Rated T+ …$3.99

That's a really shitty cover, by the way. 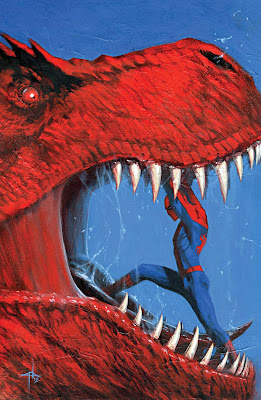 AVENGING SPIDER-MAN #14
CULLEN BUNN (W) • GABRIELE DELL'OTTO (A&C)
Horizon Labs take a field trip to the Savage Land! But when has a trip to the Savage Land ever gone right?
When a horde of super-powered lizards attack, it's up to Spider-Man, Devil Dinosaur, and Moon Boy to save the day!
Raptors are bad enough, but can Spidey overcome a prehistoric language barrier, too?
32 PGS./Rated T+ ...$3.99

Devil Dinosaur! Gabriele Dell'Otto isn't an artist I would think would do a good Kirbysaurus, but that might make for a great pairing because of that.

I like the choice of a blue field background too; it makes Spidey and DD match remarkably well on this cover.

"Lizard-Ock" looks and sounds dumb. That said, if "Venemma" is the name of a a Venom-possessed Emma Frost, that pretty much makes up for the formers lameness. 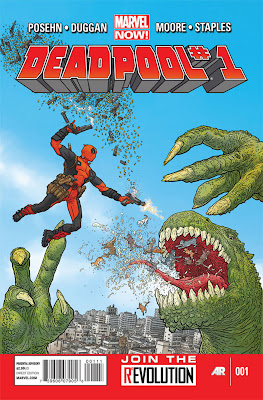 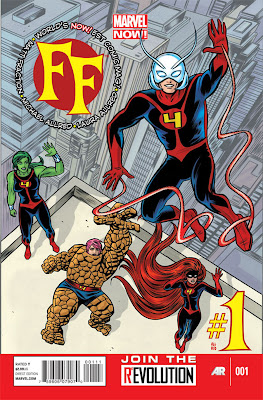 FF #1
MATT FRACTION (W) • MIKE ALLRED (A&C)
...
We have seen the future and it will be fantastic! In the absence of the Fantastic Four, a substitute Four, hand-picked by the real deal--Ant-Man, Medusa, She-Hulk and Miss Thing--stand ready to guard the Earth and the nascent Future Foundation for four minutes... NOW! what could possibly go wrong?
32 PGS./Rated T …$2.99

I'm super-excited about the possibility of Mike Allred superhero art on a monthly basis again. I'm curious about what Ant-Man that will be. I'm seriously a little freaked-out looking at "Miss Thing." 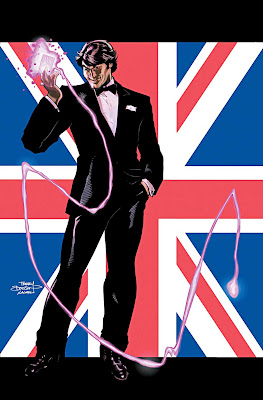 I don't understand; what's Gambit doing with that card that it's energy trail looks like that? If the trail is the path of the card, he must have been dancing around rather weirdly with it. 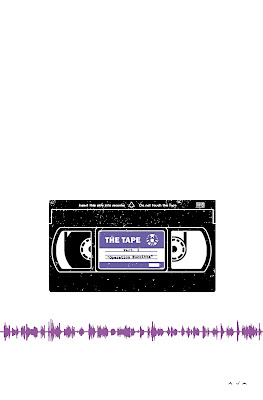 That's the cover of Hawkeye, and it's a nice, minimal one. Looks like Hawkeye is gonna be competing with Daredevil for best covers.... 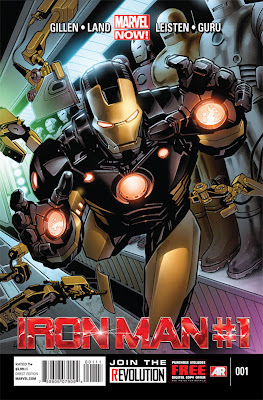 I like the color scheme, and it seems almost daring for Marvel to change it so radically from the movie version.

This is a Greg Land comic though, so it's going to be risible trash. I love the giant-ass one that's part of the logo...they should do that with each issue (It sure would make keeping up with the series easy, especially if they do that accelerated-publishing thing they do with so many of their books).

I'm intrigued by what looks like the big, chunky, foul-mouthed Skeets floating next to him.

I'm confused by the reference to Banner as the "smartest man alive"...what does Mr. Fantastic have to say about that?

I'm surprised that there are six variant covers for this, for a total of seven covers.

I do not like the pants, or the "Agent of SHIELD" premise, which seems like it has been done with, let's see, every single Marvel character ever, so that sounds a little tired.


MARVEL'S IRON MAN 2 ADAPTATION #1 (of 2)
WILL PILGRIM (W) • TBD (A)
• The Marvel Cinematic Universe returns with Iron Man 2, the adaptation of one of Marvel Studios blockbuster films!
• Why does the government go after Iron Man?
• Plus a mysterious figure from Tony's past returns-and he's got a vendetta.
• Featuring: the first appearance of War Machine!
32 PGS./Rated T+ ...$2.99

The fuck is this...? A November 2012 comic book adaptation of a movie that came out in 2010...? And the artist hasn't yet been determined...? There is absolutely nothing about this solicitation that I understand.


VENOM #27
CULLEN BUNN (W)
DECLAN SHALVEY (A)
COVER BY Patch Zircher
MINIMUM CARNAGE – PART FIVE!
• Venom, Scarlet Spider and the Micronauts fight to save a universe – but in the process, have doomed our own!
• Cullen Bunn and Declan Shalvey bring you the pentultimate chapter of the mega-levolent masterpiece!
32 PGS./Rated T+ ...$2.99

Ha ha, I really like the term "mega-levolent." Sue me. 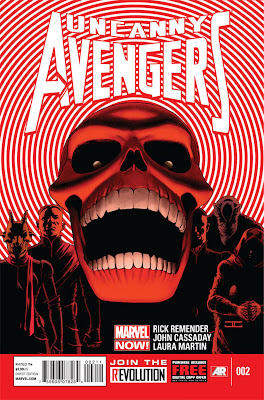 I kinda like the design of this cover and the way the logo, giant skull and radiating red and white lines look, even though I don't really care all that much for Cassaday's rendering.


X-MEN: LEGACY #1 & #2
SIMON SPURRIER (W) • TAN ENG HUAT (A)
...
Legion, the most powerful and unstable mutant in the world and son to Professor Charles Xavier, has killed gods and reshaped the face of the universe. NOW! in the aftermath of Avengers vs. X-Men, Legion will finally attempt to conquer his demons and embrace his father’s legacy!
32 PGS. (EACH)/Rated T …$3.99 (EACH)

Just wanted to point out that this one is by a good writer and an excellent artist with a very quirky, very un-Marvel style. It should be one to watch...or at least catch up on in library trade some day. Again, intriguing looking book, curiosity-killing price.


I think I'm gonna add Fantastic Four and FF to my pull-list, and see how those first few issues go. And while that's only two new titles, it does double my current Marvel pull-list, which currently consists of only Daredevil and Hawkeye.

NOW! the only things I enjoy at Marvel are Hawkeye and Journey Into Mystery and Thor. So naturally, they are giving JIM to Sif, which is ok, I guess,and restarting Thor...again.

Where is Loki? I want to know NOW!

it's not clear what the actual cover price on X-Men Legacy will be. the solicitations and Preview catalog say $3.99. Marvel's own site and the cover mock-ups included with the solicitations say $2.99. it will make the difference between monthly and trade for me, especially since they're double-shipping so many other books that month already.

The Ant-Man in FF is Scott Lang. It says so in the USA TODAY article that teased the seriies: