Daredevil #17 (Marvel Entertainment) I'm strongly considering renaming this recurring feature "Daredevil and Maybe a Few Other Comics", because the ostensibly monthly Daredevil comic book seems to come out at least as often as I write this ostensibly weekly column.

For this particular issue, writer Mark Waid is joined by artist Michael Allred and his colorist/wife Laura Allred and it is, unsurprisingly, one perfect-looking comic book. Allred draws like he was bred, born and trained to be the ultimate artist of Silver Age Marvel superheroes, and while I imagine it's much more creatively fulfilling for him to be doing things like adapting the Book of Mormon or drawing Madman and/or Atomics comics, it's always a treat to seem him tackle one of Big Two's IPs.

This is a done-in-one in which Matt Murdock reflects upon his relationship with friend and now former law partner Foggy Nelson, thinking about some of the fights they had in the past, and this one time he totally fought The Stilt-Man.

There's some great melodrama in here involving Matt and Foggy and the great gift the latter gives the former, and a rather remarkable image of Daredevil posing, leg up on the edge of a rooftop, looking heroic in a big, bold panel that doesn't look all that Allred-esque. The centerpiece, though, is a chase sequence-turned-fight sequence in which DD tries to catch up to and take down Stilt-Man, who is taking fantastically long strides to power-walk away from the scene of the crime.

In a perfect world, every issue of Daredevil—and every other superhero comic—would look this good, and feature the work of an artist who can just draw the hell out of any and everything the writer puts in the script.

Green Lantern #12 (DC Comics) Green Lantern has long been DC's most suspenseful book. Every month, pencil artist Doug Mahnke is joined by somewhere between two and seven different inkers, most of whom weren't solicited and quite clearly there because the art was running very late, and there was no time for an artist or three to ink the pencils before it had to go to press. DC was seemingly always just turning this book in at the last minute, leaving one to wonder, will they ever completely blow a deadline, will they ever get so far behind that no amount of inkers can help Mahnke get this book across the finish line?

Well, this is the month!

Instead of the solicited art team of Mahnke and Mark Irwin, this month's issue shipped featuring artwork by Renato Guedes and Jim Calafiore. The former handles ten, maybe 12 pages (a few are so rough it's hard to tell who drew 'em), while the latter, an artist apparently prized for his speed and unfortunate to be one of those who had their careers dented by work on Countdown, draws the remaining eight-to-ten pages.

While Guedes does a fine job on his pages, and his style is close enough to Mahnke's that it's at least in keeping with the general look of the book, Calafiore's doesn't look a thing like GUedes' or Mahnke's, and looks like the emergency fill-in work it so obviously is.

DC of course offered to fully refund the cost of this issue to anyone who pre-ordered it expecting Mahnke and Irwin, because if there's one thing DC gives, it's a shit about its readers.


Saucer Country #6 (DC) Guest artist Jimmy Broxton joins Paul Cornell for a more-or-less standalone issue of the series entitled "A Field Guide To Flying Saucers," which is more-or-less just that. Presented as the governor's newly recruited UFO expert's slide presentation on the history of UFO/space alien contact as a cultural phenomenon, it's a nice, quick overview of the subject with Cornell's finger on the fast-forward button.

It's also an opportunity to see Broxton draw the angels of Ezekiel, Kenneth Arnold and the ships he saw in 1947, Mulder and Scully, George Adamski, the Hopkinsville Goblins and so on.

Wonder Woman #12 (DC) In this conclusion to Brian Azzarello and Cliff Chiang's year-long story about Wonder Woman getting caught up in a power struggle between various Olympians, she and Hermes have a rematch against Apollo and Diana.

In a scene straight out of Dragon Ball Z, she strips off her apparently very, very, very heavy wristbands, which "CHUNK" so hard on the ground of Mount Olympus that they crack it and sink into the holes they make. She coyly references the fact that they inhibit her true powers (kind of like how Goku and Piccolo would fight wearing heavily-weighted clothing), and then her eyes, the star in her tiara and ribbing in her top start glowing with energy and she beats the shit out of the goddess Diana (Colorist Matthew Wilson does a particularly fine job; because the coloring effects are so sparsely used, when something glows in the pages of Wonder Woman, that glow stands out). I'm no expert, but I'm not sure the twelfth part of a twelve-part story is the best time to mention for the first time that your protagonist has some strange, never-before-alluded to god-wrecking power. 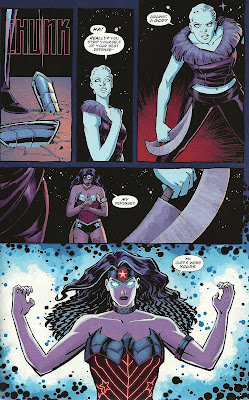 Then they call a truce, so the conflict isn't resolved so much as stopped, somethign similar to something that happened in Marvel's Incredible Hercules series happens, Hermes temporarily gifts Wonder Woman with the power of flight (which she had before the New 52-boot, and which Azzarello never referenced whether or not she had over the course of the last 11-and-a-half issues until she's given it here) and there's a truly weird epilogue in which Wonder Woman seems to include the last page of a new New Gods series. 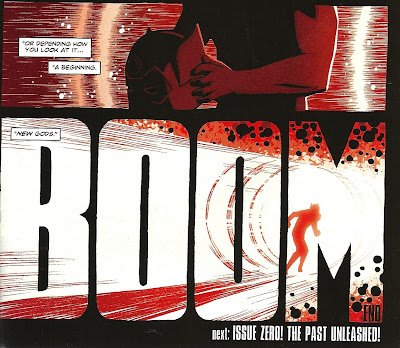 If Wonder Woman going to continue to be more of a book dealing with Ancient Greek mythology than anything Wonder Woman or superheroine specific, I suppose it makes sense to follow up a year-long arc dealing with the Greek "old" gods with something to do with Jack Kirby's "new" gods, and it could prove pretty fascinating to see the pantheons interact. It's just awfully out-of-left-field, like a few other key elements of this particular issue.

Oh, and the cover? It has nothing to do with the insides of the book, save that both characters appear, so don't buy this if you're expecting smooching!

...Wait, did Wonder Woman really call her bracelets/wristbands "cuffs" in that panel up there...?
Posted by Caleb at 5:53 PM