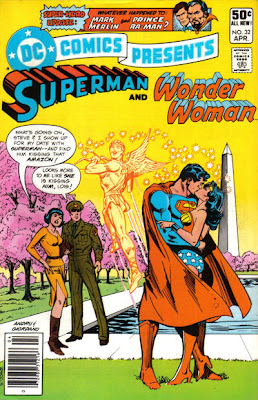 Chances are you've already heard the news that Superman and Wonder Woman were totally going to hook up in Justice League #12, which DC Comics is pushing as a really rather big deal, and managing to get some mainstream press out of their pushing.

You may have wondered, "Say, what does Caleb think about this?"

But it still seemed like a good opportunity/excuse to delve into the two characters' fictional biographies, so at ComicsAlliance I have a pair of related articles: The Many Loves of Superman and The Many Loves of Wonder Woman, detailing the two superheroes' romantic histories.

Even if you don't read the full stories, do take the time to watch the Batman/Steve Trevor/Wonder Woman team-up from Batman: The Brave and The Bold, which manages to work the Golden Age version of Wonder Woman and one of her earliest foes and the 1970s conception of Steve Trevor (complete with Wonder Woman theme song!) into the world of The Brave and the Bold. 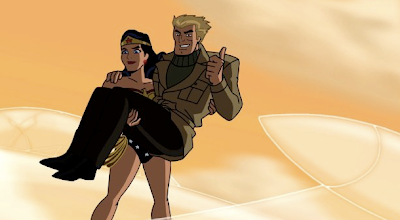 I fucking love that show.

My editors also embedded a few clips from the Justice League Unlimited episode where Wonder Woman gets turned into a pig and Batman has to sing to undo the spell, which was one of the highlights of that series.
Posted by Caleb at 7:39 PM

Y'know who I always wished Wondy would've developed a thing for? Larry Trainor. He was a pilot, she has an invisible plane, he has chemically-treated bandages... Okay, fine, the pairing makes no sense, but it seems ill-fated enough to work! Or at least be interesting. Which the blaringly obvious pairing isn't.

The only time I ever cared about Wondy & Supes kissing was during DARK KNIGHT STRIKES BACK...

The only time the Superman/Wonder Woman pairing worked was in 'Kingdom Come'. I only ever imagined her with Steve Trevor though I can't deny that WW humming that tune Batman sung for her freedom was a pretty sweet moment in their relationship.

I am Doris used every single spell worker on the internet, spent untold amounts of money and discovered they are all fakes…i was the fool though; doing the same thing over and over again and expecting different results. In the end, I decided that I wanted a tarot reading to know what my future held for me; I contacted a woman who lives locally to me and she told me about a man named (priests meruja); he does not advertise on the internet, has another job for income, has no set prices, makes no false promises and refuses to help anyone that cannot be helped and even helps
for free sometimes, he will give you proof before taking money. He is a wonderful man and he was the only person who actually gave me real results. I really hope he doesn’t mind me advertising his contact on the internet but I’m sure any help/ extra work will benefit him.contact him as nativedoctor101@live.com He travel sometimes.love marriage,finance, job promotion ,gambling voodoo,lottery Voodoo,poker voodoo,golf Voodoo,Law & Court case Spells,money voodoo,weigh loss voodoo,any sicknesses voodoo,Trouble in marriage,it’s all he does Hope this helps everyone that is in a desperate situation as I once was; I know how it feels to hold onto something and never have a chance to move on because of the false promises and then to feel trapped in wanting something
more. his cell phone number 5182932141 !