DC Comics has released their solicitations for the comics they intend to release in November of this year. You can read them, and look at the cover images, in various places around the Internet, like right here, for example. But you can only read my thoughts and feelings about them here, on Every Day Is Like Wednesday!

One thing I noticed while scanning through the solicits for those dumb Before Watchmen solicitations, which DC will apparently still be publishing in November, is that each includes the words "Plus, writer/artist JOHN HIGGINS brings you the latest chapter in saga of the CRIMSON CORSAIR!" In October's solicits, Len Wein was credited as the writer of the Crimson Corsair back-ups, and Higgins as the artist.

So what happened to Wein? Did Pam jump in? 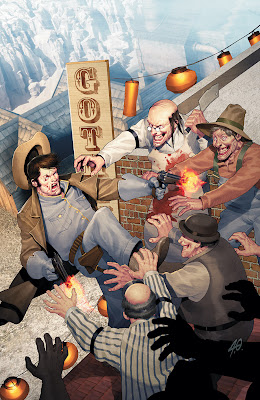 I really dislike Ariel Olivetti's style. Look at that background. Ugh. It seems especially inappropriate for a Western title, too, as the genre seems to demand a certain tactile quality of dirt, grit, dust, sweat and messiness that Olivetti's strangely smoothed out, super-clean imagery can't conjure. It looks so real and unreal at the same time that I sometimes feel like I'm looking at photographs of holograms or something. 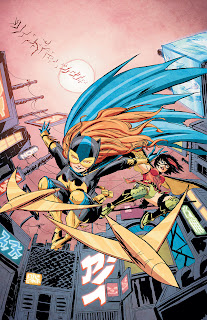 I really love Sanford Green's art, but, like Amanda Palmer who is to draw a Wonder Woman Ame-Comi book, I question whether he draws sexy/fan-service-y enough, and if he draws manga-influenced enough for this particular project. These are, after all, comics based on cheesecake/fan-service manga-style statues for the mildly perverted, and this looks and sounds like just another superhero comic book, albeit one with a pretty awesome artist attached. 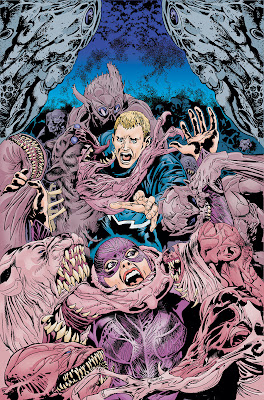 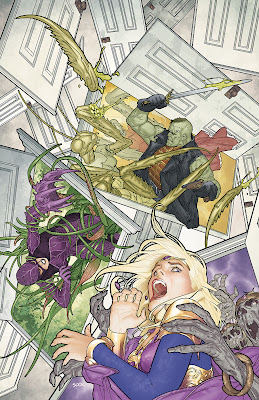 The New 52 Black Orchid—that is who that's supposed to be on these covers for Animal Man and Justice League Dark, right?—looks like she's wearing red cabbage.

Hmm...maybe they'll spin her off into her own book with a new costume, with variant photo covers featuring a live model, at some point...? 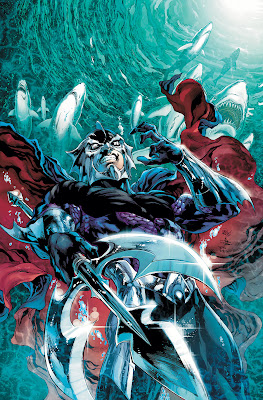 So there's the new New 52 Ocean Master. Not a whole heck of a lot different than the old Ocean Master; costume has different colors, looks more like armor than a supervillian costume, he has a trident instead of an "O" shaped blade, and he and Aquaman have matching belts now. That's kinda cute.

Note that Pete Woods is providing art. Either I didn't notice it/can't remember it, but I'm fairly certain this is the first time pencil Ivan Reis has taken a month off. Wait, just remembered that awful issue about bad-ass Mera being made at people calling her "Aquawoman," breaking the arm of that handsy strawman sexual harrassing grocery store manager, almost killing another dude. Let me check: Yeah, Aquaman #6 had Joe Prado finishes over Reis layouts, rather than Prado inks on Reis pencils.

Every time I finish an issue of Aquaman, I tell myself I'm gonna drop it and switch to trades. So as I look at this, I'm thinking, "Well, I"ll read that in trade next summer," and I don't know, now I don't know if I can quit it.

Not to belittle their love or anything, but that's how I feel about Aquaman: Like the gay cowboys in Brokeback Mountain. 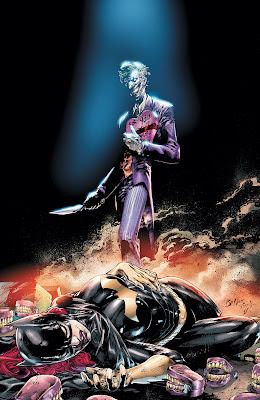 Having cut off his face for some reason in last year's Detective Comics #1, DC was apparently supposed to be making something of a big deal about what he would look like in November's "Death of the Family" crossover story thingee, and the fact that he just kinda taped it on and and wrapped a leather belt around it was supposed to be a big reveal...that the publisher kinda messed it up, to the annoyance of one of their most popularly lauded artists.

Looks like Ed Benes is doing his regular bang-up job there. Great background and sense of place. 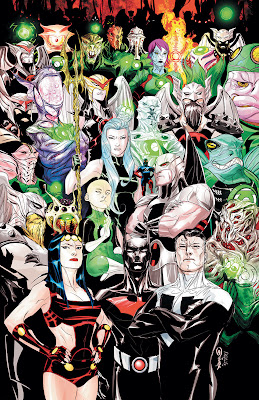 That's a fine cover by Dustin Nguyen. I like how normal everyone looks, just kinda standing there as if for a class photo or something, despite how bizarre the many crazy aliens are. Props to Nguyen too for inventing so many of his own crazy aliens to draw there, rather than just draw the same old homages to the same dozen or so crazy alien Green Lanterns you usually see (Although maybe those props belong to whoever designed the aliens inside the book; I don't know). 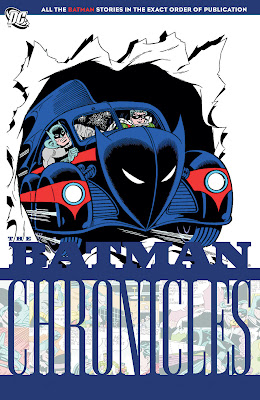 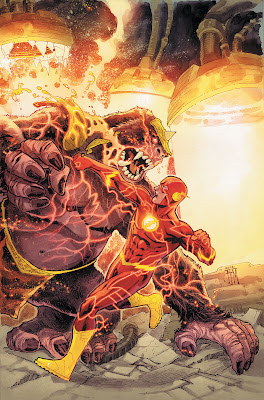 I don't know Flash; I don't want to be a armchair super-combat coach or anything, but if I had super-speed and were fighting a gigantic gorilla, I'd probably stand well out of arm's reach and throw rocks at him or wave my arms to hit him with little red tornadoes or whatever that thing you do is. I probably wouldn't get in that close. I'm just saying, is all. 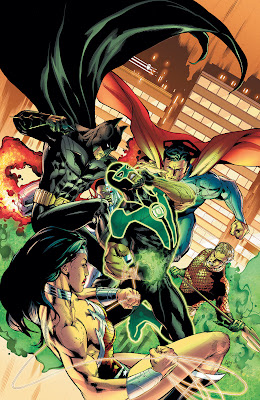 I'm kind of excited about this issue of Green Lantern, as it will feature artist Doug Mahnke drawing the Justice League again...even if they're all wearing lamer costumes than the last time he drew them during his JLA run. Jeez, even Batman's costume looks over-busy. How to take Batman's costume and turn it into a shitty design? Sheesh. 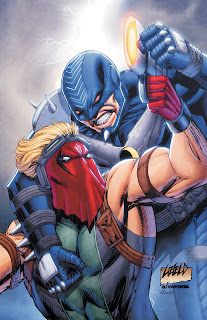 GRIFTER #14
Plotted by ROB LIEFELD
Written by ROB LIEFELD and FRANK TIERI
Art by SCOTT CLARK and DAVE BEATTY
Cover by ROB LIEFELD
On sale NOVEMBER 14 • 32 pg, FC, $2.99 US • RATED T
• Midnight in Paris! Grifter vs. Midnighter in the city where Cole was forced to kill his brother!
• Guest-starring Voodoo!

Ha ha, it's 2012 and DC Comics is publishing this comic book!

I am fascinated by the fact that DC apparently never says "no" or "try again" to Rob Liefeld, they just accept and print whatever he turns in. They never send him a note saying, "We like the idea of this piece, and the energy is good, but it kinda sorta maybe looks like Midnighter is ten feet tall, or Grifter is three feet tall. If the latter is on his knees or something, you should probably pull out on the image a little so we can actually see their legs. Some form of background might also help sell what you were going for." 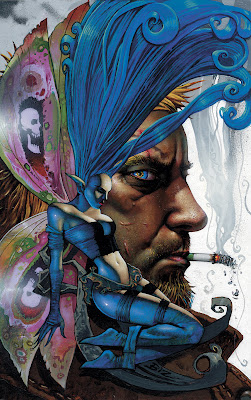 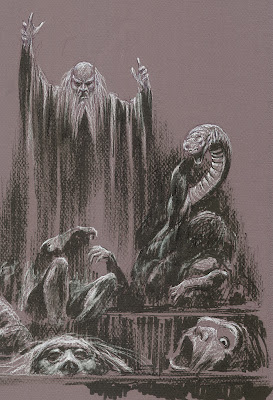 JOE KUBERT PRESENTS #2
Written and illustrated by JOE KUBERT, BRIAN BUNIAK and SAM GLANZMAN
Cover by JOE KUBERT
On sale NOVEMBER 28 • 48 pg, FC, 2 of 6, no interior ads, $4.99 US • RATED T
• At last: A lost Joe Kubert classic sees print! The amazing sci-fi epic THE REDEEMER begins in this issue!
• New stories with classic characters ANGEL AND THE APE and the crew of the U.S.S. STEVENS!

Last month, when DC solicited the first issue of this series, I was super excited. Today I see this solicitation and that wonderful drawing, and I feel sad. For a telling example of what an incredible artist Joe Kubert was, take a moment to scroll through all of the cover images DC has released, and see how poorly so many of them compare to the above, which looks particularly dashed-off and is lacking in color and other production.

I will link to this in next Sunday's links round-up, but since Kubert has come up in the course of this goofy feature of mine, here is Tom Spurgeon's obituary for Kubert, and here's Spurgeon's "Collective Memory" feature which compiles various remembrances, tributes, appreciations and galleries of Kubert and his work. 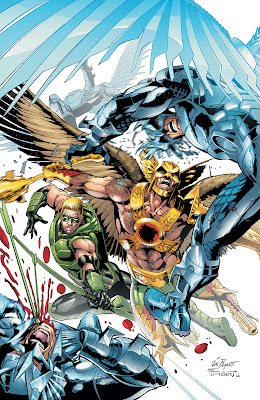 So, is that a picture of Green Arrow straight-up killing a dude on the cover of The Savage Hawkman #14? If so, then I think GA may be out-savaging The Savage Hawkman, whose giant-ass mace only maybe kills his foes.

Of course, those aren't humans from the planet earth they're fighting with apparently deadly force, but humanoids from the planet Thanagar, and I think there's some loophole in the New 52 where superheroes can kill their enemies as long as those enemies weren't born on Earth (see the first few issues of Justice League for a half-dozen examples). 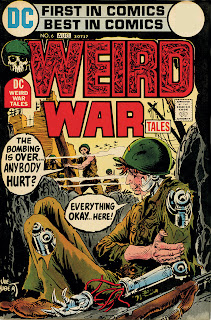 More Kubert. Plus art from Russ Heath, Alex Toth, Alex Nino...Kanigher stories...Wow, this is gonna be a good one.


SUPERGIRL #14
Written by MIKE JOHNSON
Art and cover by MAHMUD ASRAR
On sale NOVEMBER 21 • 32 pg, FC, $2.99 US • RATED T
• A "H'ELL ON EARTH" crossover chapter!
• Picking up from SUPERBOY #14, Supergirl meets the villainous H'el!
• What happens when she finds herself agreeing with his pro-Krypton/anti-Earth plans?
• Continued this month in SUPERMAN #14!

A character with some kind of Krypton connection named "H'el" is kinda funny, but shouldn't it be "He-El" or "Hel-L," to stick with Krptonian naming conventions...?

Or does he have nothing at all to do with Krypton, and it's just a goofy coincidence...?


WONDER WOMAN #14
Written by BRIAN AZZARELLO
Art by TONY AKINS and DAN GREEN
Cover by CLIFF CHIANG
...
On sale NOVEMBER 21 • 32 pg, FC, $2.99 US • RATED T
...
• Wonder Woman's twisted "family" grows larger than she could have imagined.
• On the trail of the god who betrayed her, Diana crosses the path of the deadly SIROCCA!

The "deadly SIROCCA," huh? I wonder if that's an all-new character with that name, or if it refers to the Iranian speedster that Kurt Busiek introduced during his fairly excellent run on the Superman books, one of the many, many, many, many characters who were "de-created" by DC's somewhat perplexing New 52boot, in which they purged their universe of hundreds, if not thousands, of IPs. 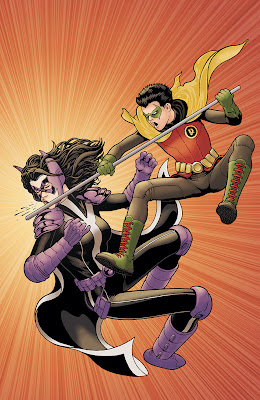 WORLDS' FINEST #6
Written by PAUL LEVITZ
Art by KEVIN MAGUIRE, GEORGE PEREZ and SCOTT KOBLISH
Cover by KEVIN MAGUIRE
1:25 B&W Variant cover by KEVIN MAGUIRE
On sale NOVEMBER 7 • 32 pg, FC, $2.99 US • RATED T
Retailers: This issue will ship with two covers. The variant cover will feature the standard edition cover in a wraparound format.
• What happens when Huntress, the former Robin of Earth 2, meets Damian? The same thing that happens when anyone meets Damian: a massive fight!
• Huntress has managed to keep her true identity on this Earth a secret so far, but with Damian on her trail, can the world's greatest detective be far behind?

So that's what Kevin Maguire drawing Damian would look like. Huh. This is the first issue of this comic where the cover and solicitation made me want to pick it up. There's something really appealing about that character, smug little bastard that he is.


Finally, if you thought the new Captain Marvel design looked stupid when drawn by Gary Frank, just wait till you see it rendered in a small, plastic sculpture! 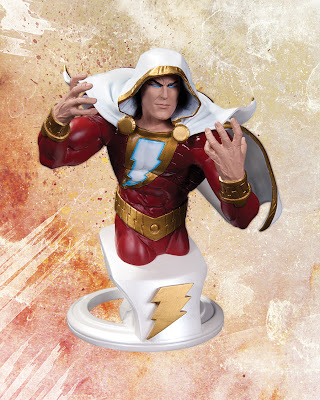 Entertaining as ever, sir. I used to feel the same way about Nightwing as you do about Aquaman – I bought every "Old DCU" issue of Nightwing, irregardless of quality – but the New 52 has been so rotten I finally managed to quit him. It can be done!

Hmm, I think He-El is Mattel's bonus figure if you subscribe to both Masters of the Universe Classics and DCUC figure lines...

Thanks to you Caleb, I can no longer look at the new Green Lantern guy, without thinking that he's wearing his underwear on his head.

And I agree about Damian, smug little adorable bastard that he is.

That Captain Marvel statue is just...just...ridiculous. He's pulling his little cape over his head? Playing peek-a-boo? What the heck?

I fear that a lot of the quality might be due to Kubert being ill. Not sure how far ahead he was sending stuff into DC. I'll take any new Kubert work as a blessing. Sounds like the guy was still working on stuff right up until the end. My wife's dad had a similar type of cancer (that unfortunately killed him).