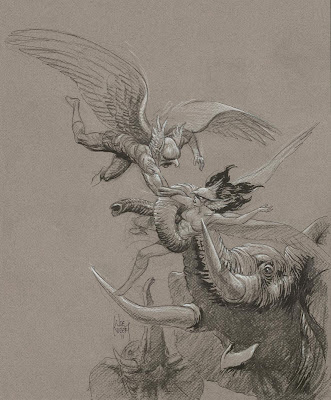 As you may have heard, Joe Kubert has passed away. He was one of the very best artist's to touch pen or pencil to paper in the American comic book industry, and he never stopped doing it—DC just recently announced an anthology miniseries entitled Joe Kubert Presents featuring his work. More remarkably still, the huge body of work work Kubert leaves behind accounts for but a single area of his contributions to the field, which also working as a comics editor, siring two of the most popular superstar artists and founding an art school that taught a large swathe of an entire generation how to draw.

I've never met him, but I'll miss him.

Here's a public service announcement of sorts from Challengers comic shop in Chicago, regarding the proper way to let your shop know you no longer wish to purchase comics from them.

In last week's Grumpy Old Fan column, Tom Bondurant compared the relative lack of history, invention and direction in the now one-year-old New 52iverse, compared to the last similar reboot DC did (in the wake of Crisis On Infinite Earths).

He singled Geoff Johns, Jim Lee and company's Justice League book as one that feels especially hurt by the lack of a cohesive universe, which, he later explains, doesn't just refer to a place with continuity, but a vibrant setting full of possibilities:


Most of the A-list books are like Action in that they have established their new status quos pretty definitely. I mentioned Flash and Wonder Woman already, and Scott Snyder on Batman has done a good job making the Court of Owls feel like it’s been a credible behind-the-scenes menace. Similarly, with Green Lantern and Aquaman, Geoff Johns is working the characters’ mythologies at appropriate stages. On GL, he’s trying to distill eight years’ worth of stories into something which will inform a relatively-simple rebellion against the Guardians, and on Aquaman, he’s in the early stages of something which could conceivably last several years itself.

I think that’s what frustrates me about his Justice League...it just feels like Johns isn’t taking full advantage either of the characters’ own backgrounds or of the DC Universe as a whole. Clearly part of that is the need to make the book accessible, part of it is the “newness” of the Leaguers’ revised backgrounds, and part of it is the desire to create something new (as opposed to another Starro or Despero story). Nevertheless, of all the books in DC’s lineup, Justice League is the one best-suited for a global perspective on the entire shared universe, and now it feels hobbled by self-imposed restrictions.

I suspect much of that has had to do with the fact that the first Justice League story arc was set five years before the rest of the New 52 books, but I would wager even more of it has to do with the fact that DC writers, editors and artists never really hammered out who Wonder Woman was now, or who Superman was now, and so the ones in Justice League read like different characters than the ones in Wonder Woman, Action, Superman and so on.

The characters were therefore all extremely well fleshed-out and had their own, independent (if fictional) lives before they banded together in a single book.

In the New 52iverse, the Justice League debuted the month before all of the other books, and was set five years prior to all of the other books, giving us the inverse. It wouldn't make sense for DC to reboot their universe and then wait until, I don't know, 2031 before debuting Justice League #1 (especially since the reboot is unlikely to last that long), but I think it's worth noting that when the Justice League originally came along, its creators were familiar with its characters from years, even decades of reading about them.

When the new, New 52 Justice League came along, Johns and company were re-creating the characters on the fly, simultaneously to and parallel with the other creators or teams of creators re-creating them in other books.

I don't know, Brian Michael Bendis has been writing entire runs of popular comic books using various configurations of that first panel that never works (sometimes it's vertical though, and sometimes it's a splash page) for well over ten years, and it certainly seems to work for him.

And by "works" I don't necessarily mean it results in good comics, but that he remains popular, continues to get a lot of choice work from his publisher and makes a crazy amount of money for someone who seems to still be struggling with the vocabulary of comics. (Via The Beat

I've read very little of that chunk of comics, but I was pretty fascinated by the way Spurgeon argues that it hangs together as a more-or-less complete story, and it reminded me again what a shame it is that Brian Michael Bendis, Mark Bagley and company's Ultimate Spider-Man comic turned out like it did.

Unlike Marvel at the time they published >ASM #150, Bendis was free to end Ultimate Spider-Man at almost any time, and he really could have written a complete story, with a climax and an end for Peter Parker. He had the opportunity to, for the lack of a better term, "so Amazing Spider-Man right," having Peter Parker grow up, finish school, go to college, fall in love, get married, get divorced, bury Aunt May, ultimately die, whatever. Bendis has stuck with Ultimate Spider-Man in its various iterations for 12 years and what has to be about 200 issues now.

During the period I was reading it, it was a very good comic book, if suffering from the same flaws of all of Bendis' books. But it wasn't what it could have been, something akin to the first 150 issues of ASM and/or the 300-issue Cerebus, the complete story of the entire life of one of the greatest superheroes, from start to finish.

Bendis did, of course, "ultimately" kill off Peter Parker, and replace him with a new, legacy version of Spider-Man, but his Spider-Man didn't grow up at all like the original Spider-Man of the 1960s did; I quit reading after the first renumbering of the series, but I would be surprised to learn if more than two years passed during the entire run of Ultimate Spider-Man.

The other day I shared a quote of a writer talking about Superman, which mentioned Superman's costume, and half-jokingly wondered about what the fact that DC changed that costume last fall in an attempt to appeal to a new, wider readership said about us.

I haven't heard many people praising the new, "New 52" Superman costume, which consists of metallic armor and, rather than red shorts, has Superman wearing what looks like an iron metal diaper.

This week I read a kids book by Leslie Patricelli entitled The Patterson Puppies and the Rainy Day (Candlewick Press; 2009), and saw one way Superman could have change his costume for the worse, a worse worse than his New 52 costume.

The puppies are stuck indoors due to the rain, and each are pursuing their hobbies about as far as they can go. Zack, who likes to play superhero, is pushed to experiment with his costumes: 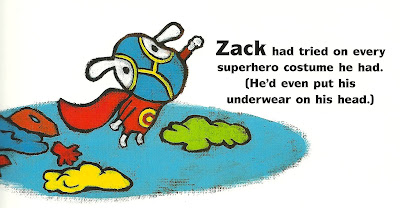 I suppose that would maybe look worse than the New 52 Superman costume...if Superman took off his shorts, and then put them over his head. 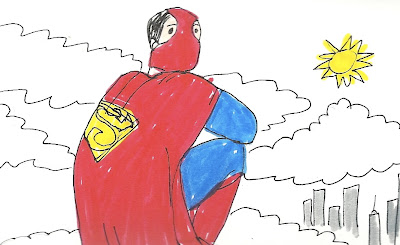 When I looked at Patricelli's funny little drawing, I immediately thought of the new Green Lantern character, and now I fear I may never be able to look at that Green Lantern the same way again: 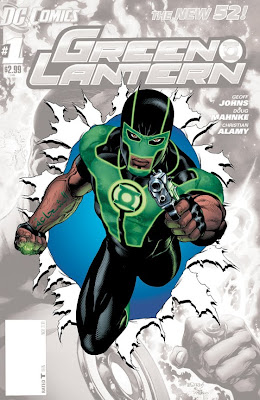 I find it interesting that if Ditko would`ve worked with Stan for a few more years, Spidey would`ve probably died. Very interesting.

You just ruined the new Green Lantern, Baz, for me with those comparison drawings. How will I ever read Green Lantern now? Wait, I stopped reading Green Lantern and now the way I keep up-to-date with it mainly is through reading your blog. Carry on then.

I'm so depressed about Joe Kubert. But I have to agree with David, now that I have seen your drawings, and the new Green Lantern, I will be giggling madly to myself.