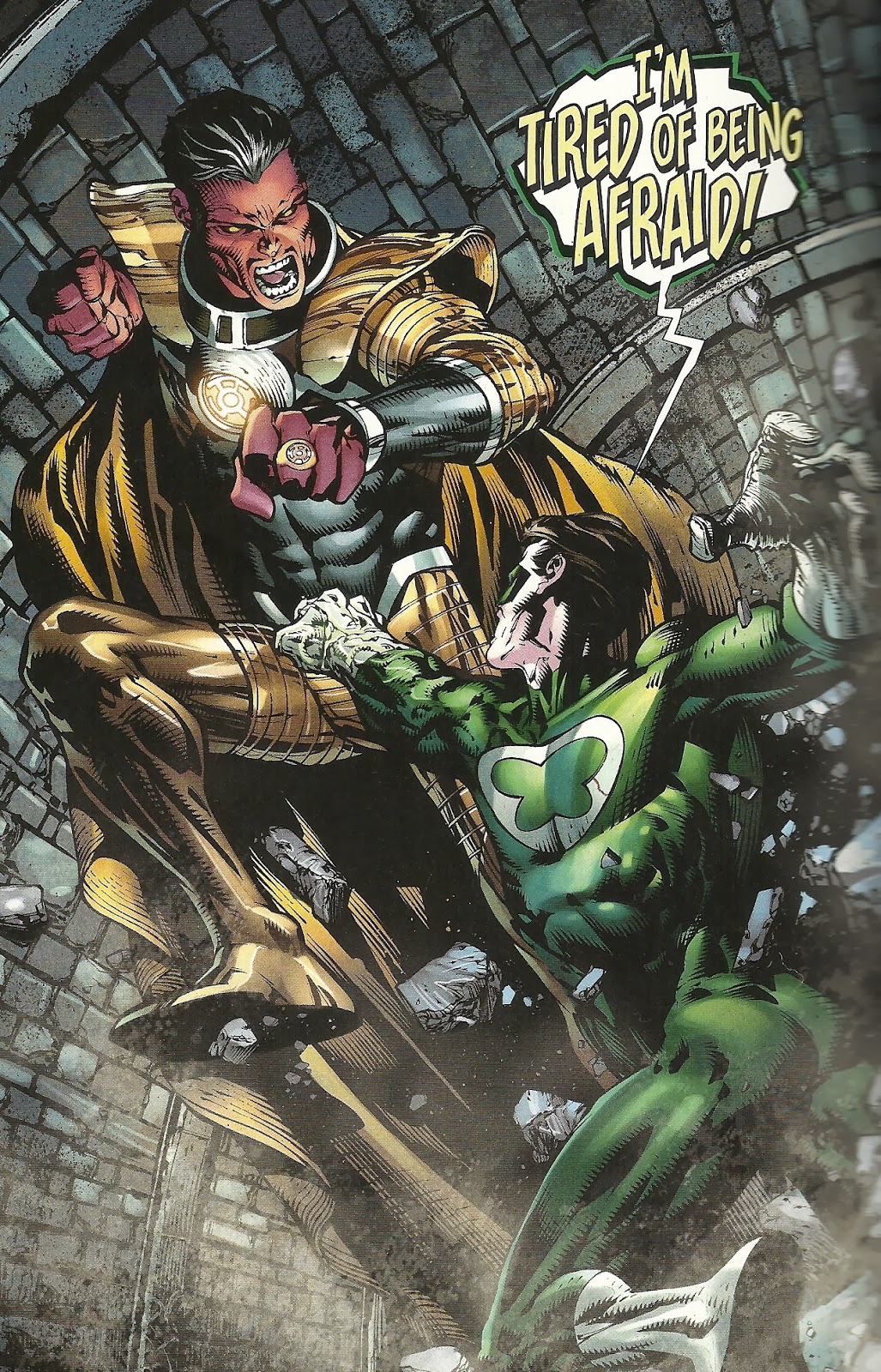 Ah, the classic brokeback pose, a staple of superhero comics. One often sees models and actresses posed looking over their shoulders and twisting at their waists, so one can see their asses and at least one of their breasts in profile, but in superhero comic books, where everything is exaggerated, and the laws of anatomy, like those of physics, can be abandoned with ease, women can be posed so that the viewer sees the entirety of their asses and both of their breasts, a pose most human beings would be unable to strike unless they had their spines removed or horribly altered (hence the name).

Here, in this splash page from Forever Evil #5 (one of the five splash pages in this 21-page comic), pencil artist David Finch draws a much more rare example of a male character striking a brokeback pose. Note Power Ring's buttocks, of which the viewer can see in their entirety, and his chest, which, likewise, is facing the viewer, and is visible in its entirety.

Is this merely another example of Finch drawing the human figure extremely poorly, or is the artist consciously making a statement, trying, in his own small way, to strike a blow for equality in the way male and female characters are portrayed in superhero comics?
Posted by Caleb at 7:44 PM

Labels: david finch, phoning it in

It's hard for me to believe that this is the same David Finch who worked on New Avengers, which was fairly decent art-wise.

Everything I've seen from Forever Evil has made me want to frown and try to remember a time when splash pages were used for big moments in comic books and not on every other page.

Johnns considers that a big moment. It actually feels like it, when taken out of context, and it`s not one of the 22 pages in a comic. But instead, it`s own thing.

As for the main topic,I`d want to believe the latter, Caleb. WANT to.

What is really interesting, is that whenever this pose shows up with a man...it USUALLY IS HAL!

Green Lanterns obviously have fabulous behinds...and Hal just can't resist showing off all of his assets.

I just realized that this is of course, not Hal. But it is faux Hal.

I thought about you when I picked up that GL/RL flip-book, Sally. What do you think of Guy's crazy-big mustache and long-haired look...?

(oh, and I was sorta surprised THAT moment got the splash, instead of the rest of the Sinestro/Power Ring fight, which includes two much bigger moments)

Caleb, Guy's new mustache is terrible, although it does depend a bit on the artist...but I actually rather like the hair.

When Guy decides to go for something, he goes all out!