While Sheldon Moldoff and Bill Finger introduced a Bat-Girl, with a hyphen, in 1961, the character Batgirl (without a hyphen) was created by Gardner Fox and Carmine Infantino at the direction of editor Julius Schwartz in 1967.

When she first appeared, she was waring the costume above, and it changed little over the 20 years between her debut and her 1988 retirement.

A few more Batgirls eventually followed in the comics. In 1999's Batman: Shadow of the Bat #83, part of the "No Man's Land" storyline, a mysterious new Batgirl in a new, all-black costume that hides her entire face appears. She's eventually revealed to be The Huntress, having adopted a bat-costume in an attempt to fill the void left by Batman, who was MIA from Gotham at the start of the story.
She's soon forced to relinquish the name and costume, which both go to Cassandra Cain, who would be Batgirl for the next 11 years, wearing that costume throughout her tenure, with little to no alteration.
In 2009, Stephanie Brown, formerly The Spoiler (and formerly the fourth Robin, albeit only for about the length of a single storyline), became Batgirl, and she had her own Batgirl costume, a black, yellow, and purple get-up with a utility belt and matching utility garter. The less said of this costume, the better. She proved to have the shortest tenure of any Batgirl, save for The Huntress, as the September 2011 New 52 reboot of the DC Universe excised Cassandra Cain and Stephanie Brown from continuity, now making it so that the de-aged Barbara Gordon never retired from being Batgirl.

Here's what her new, New 52 costume looks like.
From afar, it looks like it's basically her original costume, but the closer one looks, the more new and changed details one finds. Like most of the New 52 costumes, it isn't a simple body-stocking or spandex suit, but looks like something a Hollywood costuming department might put together for a superhero movie. It's a suit of armor more than a costume, complete with plates and seams and segments. There are more breathable, flexible areas where she needs to bend. And check out the palms of her gauntlets—I don't know why, but the grips on those give me the willies.

The inside of her cape is also purple now, and, on that first cover at least, she seems to have her cape affixed with some sort of bat-brooch...that, or she's just wearing a bat-pin on her cape.

It seems that the design has ben finessed a little big already, as the underside of her cape eventually became yellow, rather than purple.
Either way, I don't like it much, and would prefer something closer to her original costume, or the one that appeared in the 2004-2008 animated series The Batman.

Here's how artist Art Baltazar dresses Batgirl, in the pages of the DC Super-Pets Character Encyclopedia: 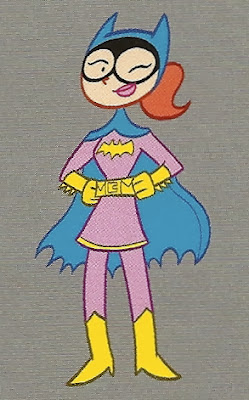 Batgirl was a recurring character in Baltazar's Tiny Titans comic, and the version of her that appears in this encyclopedia is basically a grown-up version of the Tiny Titan, wearing a pretty similar costume. She's got a fairly traditional Batgirl color scheme of blue (and blue-black), yellow and purple, which looks like a blending of her coloring from the live-action TV show and the comic books of the 1960s (where her bodysuit was most often colored gray).

Baltazar's main innovation here is that he changes her tunic into a dress—that, or she's wearing a skirt and a tunic. Baltazar's artwork is so simple and flat that it doesn't really suggest textures, so it's difficult to say exactly what material she might be wearing or how thick it might be, and therefore I can't tell if she's wearing tights or leggings under the skirt (good), or wearing pants under her skirt (bad...and weird).

I don't think this is the best possible Batgirl costume, and I don't think the design is quite the home run that Baltazar's Animal Man costume is, but I don't like it any less than I like The New 52 design and, with some tweaks, I think Baltazar's basic design could make for a far superior costume than The New 52 costume. 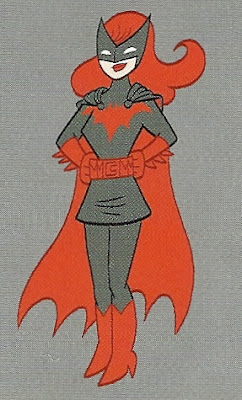 Baltazar is apparently quite enamored of the skirt/dress design when it comes to superheroines and supervillainesses. In addition to Batgirl, Wonder Woman, Aquagirl, Green Lantern Katma Tui, Black Canary, Zatanna, Hawkwoman, Raven, Harley Quinn, Catwoman, Poison Ivy, Star Sapphire and Circe all wear dresses or skirts in the DC Super-Pets Character Encyclopedia...as does Batwoman, a relatively short-lived character who has only been around long enough to have one costume design so far (Unless you count the Golden Age Batwoman, which I'm not counting).
Posted by Caleb at 8:48 PM

Stephanies costume has grown on me (not literally).

The "New" 52 Barbaras gloves look to me like they were made of snake skin. Or more like, have the same pattern.

I'm also a pretty big fan of Stephanie Brown's costume. Purple and black was a fun colour combination, and the former was a nice callback to her Spoiler getup.

I know you have nostalgic attachment to the old costumes, but you're being illogical now. Armored costumes make a ton of sense for human heroes. A normal human being isn't going to be a very effective crimefighter if they're literally wearing nothing but a body stocking.
Mind you, some of the new costumes look like complete ass, but it's not because of the armored badass normal ones.
The real question is why does Superman need an armored costume?

I prefer the batgirl costume of the Huntress... Its the most sensible. Sice she's supposed to be a stalker of the night U wudnt want bright colors drawing attention to you.