Review: The Vengeance of The Moon Knight Vol. 1: Shock and Awe 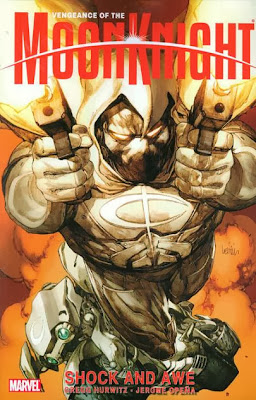 (For those of you who are not super well-versed in superheroes, Moon Knight is a very rich, obviously quite eccentric man who wears a cape, mask and costume to fight urban crime; he compensates for his lack of super-powers with superb fighting ability and a variety of elaborate and expensive gadgets, vehicles and weapons designed around his chosen nocturnal theme. So he's basically Batman, but instead of dressing like a bat, he dresses like the moon. A crescent moon, of course, not a full moon—that would just be silly.)

This fifth try at an ongoing Moon Knight series followed the 30-issue 2006 attempt, simply titled Moon Knight, which had a rather similar creative team: It's writer, Charlie Huston, also had a day job writing not-comic books, and its artist David Finch (who Hurwitz worked on Batman: The Dark Knight with) has a great deal in common with Vengeance of The... artist Jerome Opena. This Hurwitz/Opena effort only lasted a little more than half as long as the Huston/Finch one (18 issues), but it did outlast the sixth volume, by artist Alex Mallev and writer BRIAN MICHAEL FUCKING BENDIS, by six issues. So maybe Moon Knight's just not cut out for an ongoing monthly series any more? (Marvel's set to launch volume seven, by Warren Ellis and Declan Shalvey, any day now, as part of their "All-New Marvel NOW!" branding initiative).

It is not a very good book, but it's not all Hurwitz's fault. The scripts are functional, and at this earlier point in his career the man obviously has the writing of comic books down pat in a way that eludes some professional writers-who-are-new-to-writing-comics for a while.

The main problem with the story side of this particular book seems to be that it is so heavily reliant on The Moon Knight's byzantine origin and continuity (I was mostly kidding when I compared him to Batman, who he is quite derivative of; one notable difference is that Batman's a pretty straightforward, easy-to-get character, whereas Moon Knight has a large supporting cast of characters who aren't as iconic and instantly distinguishable as "sassy British butler" and "smart-mouthed teenage sidekick").

The Moon Knight Marc Spector has returned to New York after being elsewhere (he mentions the West Coast, although this pre-dates his relocation to the West Coast in his next, Bendis-written monthly), now intent on being a proper superhero, and not killing or mutilating his enemies the way he used to (Oh, that's another thing that separates him from Batman; Moon Knight is really for-real insane, with, like, multiple personalities and hallucinations and suchlike. I guess he cut the face off of his archenemy at some point in the past. I know The Joker recently had his face cut off, but it wasn't Batman who cut it off; a third party cut off The Joker's face.).

No one believes in The Moon Knight though, and they're unsure if he's a villain or a Punisher-like anti-hero or what.

He foils a robbery with several million dollars worth of weird vehicles and weapons, including a white motorcycle that emerges from a white meteor that crashes into the street, a white moon-shaped flying device and a pair of pistols that shoots bolos.

The Sentry, Marvel's Superman analogue that, like the Batman analogue whose book this is, has severe mental problems, shows up to to tell The Moon Knight he's watching him (Jeph Loeb beat Hurwtiz to the Moon Knight/Sentry team-up by about ten months, during his Hulk run, in which he had Moon Knight, Sentry and Ms. Marvel team-up against Red Hulk and Wendigos in an issue entitled "World's Finest").

Norman Osborn, The Hood and some other villains menace The Moon Knight, going so far as to to hire a Scarecrow to break everyone out of Arkham Ravencroft Asylum, lobotomize all the inmates with an ice pick  and unleash them on the city, lead by the magically resurrected archenemy of The Moon Knight, the one who had his face cut off in the past.

Spider-Man shows up—Hurwitz writes a nice scene where a chatty Spider-Man talks a criminal's ear off while he's swinging him to the police station, like an over-eager taxi driver who keeps turning around to talk to you while driving—to let The Moon Knight know that he doesn't believe in The Moon Knight either.

Meanwhile, The Moon Kngiht's craziness now manifests itself as the bird-skull headed Egyptian god Khonshu who, I don't really want to get into all that, but Khonshu is the god of vengeance and the moon that is kind of key to The Moon Knight's origin. Hurwitz touches on it here. And Moon Knight's supporting cast—ex-girlfriend, butler, ex-Moon Copter pilot, etc—show up, talking about past events from past comic books, each of them poorly introduced by Opena.

I think Opena's art might actually be a bigger problem with this book than the scripting, something that surprised me, given that Opena has done other (later) work I really rather liked, and he's not David Finch, who I did compare him to some paragraphs back.

What Opena shares with Finch is a rather dark, gritty style, with lots of blacks and lots of lines; there's not a lot of actual grit—I didn't get much of a sense of texture from the work—but the illusion of grit. This may be because Opena was trying to emulate Finch's work on the previous Moon Knight series a bit, or it may be simply because Opena felt the material called for it.

It's not that clear, though. It's rather frustrating in that this isn't Batman, so better introductions to the characters—I don't know what The Moon Knight looks like when he's not wearing his costume, as Marc Spector's face is always in shadow or tilted away or nondescript and devoid of individual characteristic or expression. I know he has brown hair, but that's about it. If he beat me up and stole my copy of The Vengeance of Moon Knight Vol. 1: Shock and Awe—No, wait, that's a library book!—I wouldn't know what to tell the police sketch artist. "He had brown hair, Officer, so I know it definitely wasn't Bruce Wayne."

All of the characters are drawn like that. Frenchie, the ex-pilot, looks a little like Silver Age Tony Stark. The girl is a girl. Spider-Man, The Sentry, The Hood, The Scarecrow—their costumes tell me who they are. Osborn has that Osborn hair (to be fair to Opena, during this period of Marvel Comics' output, Norman Osborn was in every single issue of every single comic, and no two artists drew him anything alike; you just knew it was Osborn because he had that hair that looks so damn weird when drawn in a modern, realistic style, and he was wearing a suit and yelling and people were calling him "Osborn" in the dialogue).

Similarly, a lot of the vehicles and Moon stuff aren't really introduced visually. The first time I see Moon Knight walk into the new Moon Cave or whatever he calls it, I'd kinda like to see all his Moon shit, not just the corner of a Moon Copter or Moon Plane or whatever that big, silver, curved thing just off-panel is supposed to be.

And then there's the action, which doesn't flow, and is confusing and hard to read. There's a brutal fight between Moon Knight and his foe, the undead Bushman, at the climax, and it's the sort of fight scene one needs to read repeatedly to make sense of. Little crescent moon-shaped shuriken or darts appear in Bushman's forehead without Moon Knight ever actually throwing them at him, then they disappear—Opena having forgotten to draw them or the colorist having colored over them—and then two of them are back. Like that.

But hey, let's not blame everything on the creators. Another problem with the book may have been the premise. Set during the post-Secret Invasion, pre-Siege period branded "Dark Reign," when Norman "Green Goblin" Osborn was the Boss Of The Superheroes, and his Dark Avengers (and other villains) were regarded as heroes and the real heroes all regarded as villains, a large part of this book seems to be the marriage of The Moon Knight's personal struggles with killing—his past, pre-The Moon Knight history as a paid assassin, his connection to a god of vengeance, his The Moon Knighting that killed people—to the up-is-down, down-is-up world of "Dark Reign," when villains are heroes and heroes are villains. As an anti-hero, what's that make The Moon Knight now? An anti-villain?

The status quo the book launched in was a temporary one, and perhaps it was just too closely tied to it...I'd have to read the rest of the series to know for sure, but reading these early issues collected in this trade, much of the plot seemed very dated. In fact, the entire conflict outside of The Moon Knight's head is Osborn and his lieutenant and his lieutenant's lieutenants efforts to stop Moon Knight from setting up shop as an honest-to-goodness superhero in New York City during the "Dark Reign."
Posted by Caleb at 7:04 PM

As someone who has an almost-unhealthy love for Moon Knight, I will say this iteration of the series was arguably better than most of what Bendis did, but not close to measuring up the greatness that was Charlie Huston's work--followed the by decent stuff by Benson that kind of flew off the rails at the end with Mexican-wrestler-assassins...yeah.

Anyways, this was decent, but the old stuff by Moench and Huston's newer stuff probably are my favorite "versions" of Moon Knight.

Much like David, I'm probably too big a fan of Moon Knight, and I will endorse the Mexican wrestler assassin story! That's where Moon Knight is back from in this story - not the West Coast, as you surmised, but Mexico. This was an odd series, and I will back David up by saying that Huston/Benson series was excellent. It even had about the best David Finch art you're ever going to find.

Nobody did Moon Knight well after Moench and Sienkiewicz left the title in the eighties, there's not much about him that's that original or that interesting that would elevate him from being a cult hero, so he's doomed to get series only to have them cancelled after one, two years.

I love Moon Knight. I have an unhealthy appreciation for Batman analogues. And Superman analogues, if truth be told.
Yet somehow I missed this series entirely.

Say, isn't it time for a The Shroud revamp?

It warms my heart to see other people who obsess about Moon Knight as much as me. I mean, I actually dressed up as him for Halloween two years ago!